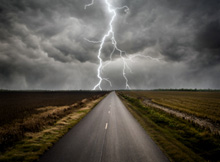 The Fear of the Lord

In verse 9 of Psalm 19, we read that "the fear of the Lord is pure, enduring forever." The comment on this verse in the once popular Scofield Reference Bible is typical of statements that are still too commonly made, I'm afraid—and not only in consciously dispensationalist churches. Scofield's comment is this: "The 'fear of the Lord' [is] a phrase of Old Testament piety."

Fear of the Lord in the New Testament

Was it another of those Gospel commands that will apply in the future kingdom age—when, according to classic dispensationalism, an Old Testament piety will again be in order—when our Lord in Matthew 10:28 commanded us to fear the God who can destroy both soul and body in hell? Was our Lord himself practicing merely Old Testament piety when his prayer in Gethsemane was "heard for his godly fear"—as the Revised Standard Version translates Hebrews 5:7? (The Bauer-Arndt-Gingrich lexicon translates the Greek noun here as "reverent awe and fear.") Isaiah 11:3 had prophesied that the messianic shoot from the stump of Jesse would "delight in the fear of the Lord."

Isn't it the very essence of man's total depravity in every age, according to the apostle Paul, that "there is no fear of God before their eyes" (Rom. 3:18, quoting Psalm 36)? The repentant criminal asked the other criminal in amazement at Calvary: "Don't you fear God?" (Luke 23:40). When our Lord wanted to indicate the character of the unjust judge in a parable, he did so by saying that he "neither feared God nor cared about men" (Luke 18:2).

You would think that simply studying a concordance would keep any Christian from thinking that "the fear of the Lord" distinguished Old Testament piety from New Testament piety. The mother of our Lord praised God that "his mercy extends to those who fear him" (Luke 1:50). The apostle Paul called upon Christians to "make holiness perfect in the fear of God" (2 Cor. 7:1 RSV), to "work out your salvation with fear and trembling" (Phil. 2:12), and to "be subject to one another in the fear of Christ" (Eph. 5:21 NASB). The apostle Peter urged them to "love the brotherhood of believers, fear God, honor the king" (1 Pet. 2:17), and to "live your lives as strangers here in reverent fear" (1 Pet. 1:17).

Now, if you look at these verses in the New International Version, you will see that the word "reverence" is used in some cases instead of "fear." And there is good reason for such a translation, because there are two kinds of fear that appear in the Bible. That is brought out in Exodus 20:20—"Moses said to the people, 'Do not be afraid. God has come to test you, so that the fear of God will be with you to keep you from sinning.' " Here a contrast is drawn between being afraid (don't do it) and properly fearing God (do it).

There is that fear that is not coupled with love and trust, and therefore can lead only to terror and despair. James tells us that the demons believe that there is one God—and shudder in fear (Jas. 2:19). The day will come when "the kings of the earth, the princes, the generals, the rich, the mighty, and every slave and every free man" will hide "in caves and among the rocks of the mountains," and will call to the mountains and the rocks, "Fall on us and hide us from the face of him who sits on the throne and from the wrath of the Lamb! For the great day of their wrath has come, and who can stand?" (Rev. 6:15-17). The writer to the Hebrews speaks of covenant breakers, apostates, for whom "no sacrifice for sins is left, but only a fearful expectation of judgment and of raging fire that will consume the enemies of God" (Heb. 10:26-27).

Need I point out that this is not that fear of the Lord that is the beginning of wisdom (Prov. 9:10), that is the soul of godliness—that fear of the Lord in which the messianic Son of David delights? In Psalm 19, where we began by noting Scofield's comment, David is rejoicing in the law that produces fear of the Lord. I am reminded of the title of Jerry Bridges's excellent book, The Joy of Fearing God (published by WaterBrook Press in 1997). I recommend that book to you. John Rosemond, whose advice on parenting is syndicated in many newspapers, says he learned something from Bridges's book about the proper attitude of the child to the parent: that fearing one's parents and knowing that they love you are not incompatible.

What a grave error it would be to imagine that the new covenant, in contrast to the old, has replaced the fear of God with the love of God. That would be as contrary to the New Testament understanding of the proper response to the God of holiness and mercy as it would be contrary to the Old Testament understanding. Before you hastily assume that there is a tension between fear of God and love of God—or between fear of God and faith in God—meditate upon the truth of Psalm 130:3-4, "If you, O Lord, kept a record of sins, O Lord, who could stand? But with you there is forgiveness; therefore you are feared."

Yes, praise God, the word of 1 John 4:18 is true: "Perfect love drives out fear." But it is the dread of eternal torment that love drives out, not reverence and adoration before God's majesty. In the song of Moses and of the Lamb, we hear, "Who will not fear you, O Lord, and bring glory to your name? For you alone are holy" (Rev. 15:4).

And so there is good reason why the NIV chooses to use the word "reverence" to speak of that fear that is a godly fear, a proper fear. That fear is the rich convergence of awe in the presence of the eternal God—the Creator of the universe, the holy Lawgiver, the righteous Judge, and the merciful Savior—and a consciousness of being in his presence every moment. There is the convergence of awe, reverence, adoration, honor, worship, confidence, thankfulness, love, and, yes, fear.

We must not omit the element of fear from our understanding of that proper reverence that the Bible commands us to have. To test the patience of our holy God, to willfully disobey his revealed will, should be to us a fearful as well as a hateful thing, because it is a fearful thing to fall into the hands of the living God (Heb. 10:31). We have seen that it is the very essence of the depravity of unbelieving men that "there is no fear of God before their eyes."

The Fear of God Today

Sometimes it seems—incredible though this is going to sound—that having no fear of God is the root sin of the evangelical church in America today, the root cause of its moral flabbiness and ineffective witness! Although it is certainly too strong to say that there is no fear of God, it does seem that there is too often very little fear of God.

A few years ago, certain prominent televangelists were making the headlines with the discovery of their blatant sins of financially defrauding trusting supporters and engaging in immoral sexual behavior. And now, once again, the president of the National Baptist Convention has begun a prison term for racketeering to the tune of 4 million dollars and pocketing thousands of dollars entrusted to him for rebuilding burned-out churches in the South. The question that immediately comes to mind is, "Don't these men fear God?" They were ministers of the Word of God, what the New Testament calls "men of God," and yet they were living (until they were caught) like children of the devil! And after asking whether such "Christians" fear God, one must go on to ask whether they can really believe in God and be guilty of such detestable hypocrisy.

Jerry Bridges writes: "There was a time when committed Christians were known as God-fearing people. This was a badge of honor. But somewhere along the way we lost it. Now the idea of fearing God, if thought of at all, seems like a relic from the past" (page 1).

Well, the term may seem terribly old-fashioned, but let us pray that the Spirit of Christ will make us a God-fearing people. Then, fearing God, we shall have no one or nothing else to fear. As we read in Isaiah 8:11-13,

The author, an OP minister, is Professor Emeritus of systematic theology and President Emeritus at Westminster Seminary California. Reprinted from New Horizons, March 2001.