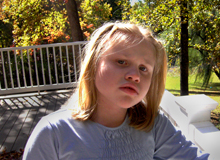 Joy in the Journey: Becca’s Story

Sometimes we forget that people in our congregation have daily struggles until a health issue or personal crisis makes the church prayer list. Orthodox Presbyterian pastor Chip Hammond and his wife, Donna, want to change that perception so they shared the story of their 9-year-old daughter Becca and her disability on Facing Life Head-On, a prolife cable TV and satellite show broadcast to more than 200 million homes weekly. "Turning Disability into Opportunity," the two-part show, was featured last winter and now is available on the website Facing Life (season 5, episodes 18 and 19). The broadcast presented the lives of four people with disabilities, including Becca, who was diagnosed with cortical dysplasia, a severe cognitive disability where the entire right side of her brain does not function. Rebecca (called Becca) is the youngest of the four Hammond children. She has struggled with seizures since she was 8 months old. Now at age nine she has the cognitive abilities of a one-year-old. She walks but doesn't speak or respond directly. She expresses affection by running up and leaning on family members and loves to play in water. To communicate, the Hammonds need to repeat things hundreds and hundreds of times.

Chip, pastor of Bethel OPC in Leesburg, Virginia, hoped that airing Becca's story would show "there were options other than abortion and that life with a handicapped child is not a consignment to a miserable life," he said. "I hoped to 'prime the pump' to get others to share their stories as they have opportunity, so that people can see the gospel in action."

TV host Brad Mattes introduced Becca by saying, "She makes a profound impact on her siblings, and parents and anyone for whom she makes contact." The show discussed how many disabilities are diagnosed in the womb, prompting some to consider abortion. People sometimes say to Chip, "'It's too bad you didn’t know about this before (Becca was) born.' I ask them why was that a question? What difference do you think that would have made?... No one really knows the future. You never know what a person will contribute to the world."

Before Becca was born, Chip thought that things would be fine as long as the baby was healthy. At the time he thought that he couldn't deal with a child with cognitive disabilities. "It's just been kind of overtime you adapt to it.... I thought I wouldn't be able to handle it," said Chip. "Somehow you do."

Becca has positively impacted the family in every way, said Chip. Her older siblings are extremely protective and affectionate with her and now are very comfortable with others with disabilities, said Chip. "Our children are so compassionate beyond their years. They are patient and tender hearted."

While many encourage stem cell use, Donna disagrees. "We have no interest in trying to promote our child's health at the expense of the life of another child," said Donna.

Facing struggles isn't unique. "There's no one who doesn't encounter and bear a heavy burden in their lives, whether it's their child or their parent or themselves," said Donna. "God gives us grace for everything that comes our way. Just because a serious health issue has been diagnosed doesn't mean there's no joy, no accomplishment to be proud of. God will enable them to be strong when they need to be strong and will provide lots and lots of joy in the journey."