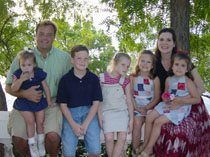 May 5, 2006. Greetings in the name of our Lord Jesus Christ, who is at the right hand of God interceding for us. This is Mark Bube, reporting for Telenews from the Committee on Foreign Missions of the Orthodox Presbyterian Church.

We continue to grieve over the news that OPC missionary to Haiti the Rev. Matthew D. Baugh was killed yesterday when the motorcycle he was riding was hit head-on by a "tap-tap" (a pickup truck converted into a taxi). Matt was in the proper lane, and the tap-tap swerved into his lane to avoid a pothole; Matt tried, but was unable to get out of his way in time. Associate General Secretary the Rev. Douglas B. Clawson and his wife, Pat, together with Matt's mother and stepfather, and close family friend, the Rev. Arie van Eyk, all arrived in Haiti this morning. Douglas and Arie are scheduled to identify the body tomorrow, and arrangements are being made to return Matt's remains and the family to the States as soon as possible thereafter. Arrangements are also being made for funeral and memorial services, but until the body is released, the dates cannot be finalized. We anticipate announcing them in another special edition of Telenews, in a mailing to the OPC alias list, and on the OPC.ORG website.

It has also become apparent that his wife, Shannon, and their five children, ages two to ten, will need significant help in the years to come. In consultation with representatives of the Diaconal Committee of the Presbytery of the South and the OPC's Committee on Diaconal Ministries, the Committee on Foreign Missions has established a "Baugh Family Diaconal Fund," to which gifts may be sent (see address below) to help the family get established back in the States and provide for their needs. Matt was thirty-seven at the time of his death. His life and ministry had a profound effect on those who knew him and grew to love him. Please keep Shannon and the children in your prayers, that they might know they have a real heavenly Father who loves his own with an everlasting love, who spared not even his very own Son for the redemption of his precious ones, and who orders all things—even the really tough ones—for the good of those who love him.