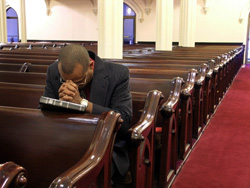 How to Pray in the New Day

Pray with Power and Boldness

What should our prayers be like in this new day of the kingdom of God? Power has to be an evident part, the boldness that comes from seeing the power of the kingdom unleashed.

The prayer life of the Jews in the days of Christ was missing this note.... Jesus taught us how to pray in the new age. The disciples sensed their need: “Lord, teach us to pray, just as John taught his disciples,” they said (Luke 11:1). They were not simply impressed with the prayer life of Jesus. Their question reveals far more than simply their failure in learning how to pray, how to use some sort of heavenly telephone. Religious groups in Jesus’ day had characteristic prayers. The Pharisees had such prayers, as did the community at Qumran and the disciples of John the Baptist. Jesus’ disciples wanted a prayer that would correspond with his message and his work. They wanted to be able to pray as people should pray who were partaking of the kingdom of God and yet waiting for its final fulfillment.

The power of the kingdom of God has been unleashed, power before which demons bow. People are astonished at the word of kingdom power (Matt. 7:28–29). Miracles pour forth, healing, saving kingdom power to answer the doubts of John the Baptist (Luke 7:18–23).

The counterpoint of bold power in our prayer life is humility. And this too flows from the new reality the world faces with Christ’s coming. Here also lies the major area of controversy between Jesus and the Pharisees.

For the Pharisees, the kingdom of God was law. “Taking on the yoke of the law” was taking on “the yoke of the kingdom.” At the heart of their concept of the kingdom was merit. “If I do this, if I observe that, if I refrain from such-and-such, God must hear me. My righteousness will batter down the walls of heaven. God audits his leger books and he will reward me exactly according to my debits and my credits.” In this atmosphere, prayer found its meaning in the context of merit. Jesus’ parable of the Pharisee and the publican underlined this....

The conclusion of Jesus is that the Pharisee, and not the publican, will never make the kingdom. It is the Pharisee who is running toward the pit of destruction. Why? Because he runs in self-trust, self-congratulation, and in sin—and he doesn’t even know it. By contrast, the God of the kingdom is the God of the despairing, the broken-hearted, the hopeless. Humility begins here, where the sinner sees not himself but God in Christ....

Do we touch here on one of the biggest problems in our prayer life-the constant pressure to substitute activity for prayer? Activity is me-centered, prayer is God-centered. Is there any significance to the fact that immediately after Luke recorded the story of Mary and busy Martha (in chapter 10) he introduced the Lord’s prayer? B. B. Warfield warns us:

Activity is good: in the cause of the Lord we should run and not be weary. But not when it is substituted for inner religious strength. “We cannot get along without our Marthas.” But what shall we do when, through all the length and breadth of the land, we shall search in vain for a Mary? Of course the Marys will be as little admired by the Marthas today as of yore. “Lord,” cried Martha, “dost thou not care that my sister hath left me to serve alone?” And from that time to this, the cry has continually gone up against the Marys that they waste the precious ointment which might have been given to the poor, when they pour it out to God, and are idle when they sit at the Master’s feet....

To power and humility we add a third component: intimacy, a new shamelessness. The world of Jesus’ day was tongue-tied. God was at a regal distance from the world and could not be addressed except in circumlocution. Prodigal sons could only speak of heaven when they meant God. “Father, I have sinned against heaven and against you” (Luke 15:18). Prayer became cap-in-hand homage.

Then Jesus came and peacemakers were blessed in the here-and-now. How? People could begin to call them sons of God (Matt. 5:9). Father, an old word on the Hebrew tongue, was given a new lease on life, a new intimacy. In the Old Testament, the fatherhood of God was related to Israel in an unparalleled manner. “Israel is my firstborn son,” the Lord told Moses as his warning to Pharaoh (Exod. 4:22). Then Jesus came, and in the uniqueness of the relationship of divine Father to divine Son, he called God “Father.” The title is on the lips of Jesus 170 times in the Gospels.

Jesus is Son in a way that no one else is Son. He is intimate in prayer in a way we cannot follow. We cannot pray as he did. Yet he says to us, “When you pray, say: ‘Father” (Luke 11:2). The salvation of God’s people would come when God revealed himself as the sovereign, saving King. Now Jesus says, “Do not be afraid, little flock, for your Father has been pleased to give you the kingdom” (Luke 12:32).

How will we approach this heavenly Father? With persistence we can come at midnight and ask for our three loaves (Luke 11:5, 6). And the Lord will give, not because he is friend, but because he is Father (Luke 11:11–13).

The above excerpts on prayer and missions are taken from Harvie Conn’s book Evangelism: Doing Justice and Preaching Grace, copyright 1982 and used by permission of Zondervan Publishing House, Grand Rapids, Michigan. Reprinted from New Horizons, April 1990.