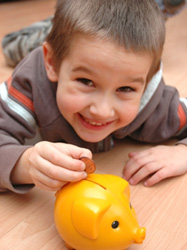 Thank Offering to the Rescue

Orthodox Presbyterians have the opportunity next month to help send another missionary to Haiti, support a new church planter in Tulsa, and train future ministers through internships and Ministerial Training courses. Dig a little deeper and wholeheartedly give to the Thank Offering—a gift earnestly needed to support Orthodox Presbyterian ministries around the world.

"We are roughly $200,000 behind the budget for 2012," said David Haney, director of finance and planned giving. "Lower giving is creating a gap in funding so a gift for the Thank Offering works to close that gap. Without a significant Thank Offering there will be a reduction in ministry that will take place."

With a generous Thank Offering, those ministries won't need to dip into their reserve funds to pay for next year's missionaries, church planters, interns, and special programs. Nor will they need to curtail ministries in the upcoming year.

"Historically looking back you can’t calculate where God will take the church in the future," said Haney. "The Lord can do what we can’t do. God won't give us more than we can handle. God provides the means we need to accomplish our goals."

Every year around Thanksgiving, we have the opportunity to share more than our weekly tithes and offerings by contributing to the Thank Offering. For the third consecutive year, our denomination hopes to receive $800,000 in the Thank Offering in November. These gifts become the finishing touch to our year of giving, which is called Worldwide Outreach.

The Thank Offering is icing on the cake at the end of the year, making up about 23 percent of the WWO's budget. A huge dollop of icing is needed this year in the Thank Offering because giving has been less than anticipated. At the end of September, gifts to Foreign Missions were more than 12 percent below budget and giving to Home Missions and Christian Education fell more than 16 percent below budget.

A generous offering would help Home Missions "be able to help with new unexpected things that come up quickly," said Graham. Last November, when Graham met with presbytery representatives to discuss how to divvy up the support for church planters and regional home missionaries, no one knew a promising new Bible study was going to start in Tulsa. "It wasn't planned for, but because it was apparent that the new work was moving very rapidly and would need an organizing pastor, we were able to identify funds for Tulsa that weren't part of the planning in our budget," said Graham. This month, support started for church planter Jim Stevenson in Tulsa, Oklahoma. "That's how good financial support enables us to do more things than just simply planning and gives us confidence to look beyond the spreadsheet for what God may do."

Our gifts to WWO and the Thank Offering support 16 full-time foreign missionaries, one part-time missionary, and 18 missionary associates in eight countries. There are also half a dozen opportunities developing in other countries.

Foreign Missions' greatest needs in 2013 are for additional missionaries in Mbale, Uganda; Haiti; and China; plus a full-time missionary to replace a part-time man in Ethiopia. Without additional funding, "in about a year we will be facing very serious cash flow problems and have to contemplate not sending reinforcements or even bringing a family home," said Mark Bube, general secretary for Foreign Missions.

This year Christian Education was blessed with the largest number of interns and students taking Ministerial Training Institute of the OPC courses ever, stretching the budget. "We are thankful for the increase in the number of internships and participation in the MTIOPC program," said Danny Olinger, general secretary of Christian Education. "We thank the church for the giving that supports these and other ministries. We rejoice in the opportunity to serve the Orthodox Presbyterian Church in the wide range of Christian Education ministries from providing resources for the churches to helping with ministerial training."

While some may assume generous giving won't happen during this economic slump, Graham recalled that when our economy bottomed out in 2000, Home Missions had it biggest year in history, with 20 new churches and two new regional home missionaries in one year. "It's outstanding to see that our economics are not the world’s economics!" said Graham.

Let us prayerfully consider how we may give far beyond our weekly tithes and offerings to the Thank Offering as a way to thank God for all he has done for his church.

Contributions to the Thank Offering may be given in the pews or online. Thank you for giving to OPC ministries throughout the world.