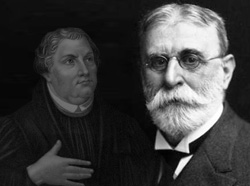 The Reformation: The Great Substitution

What was the Reformation all about? The variety of answers to that question from heirs of the Reformation, including conservative Presbyterians, is remarkable. One common tendency, popular especially among academics, is to dismiss the idea of the Reformation as a merely religious movement. That is too simplistic and reductionistic, the argument goes, and to restrict the cultural revolution of the sixteenth century to a theological or ecclesiastical debate is to sell it short. Instead, the Reformation is part of a broader movement that swept through western Europe; along with the Renaissance, it brought western culture into the modern age, giving birth to the modern mind. Described in this way, the Reformation is an achievement that is alternatively celebrated (as in Protestant liberalism) or mourned (as in the Roman Catholic tendency to blame Protestantism for secularization).

Nearly 100 years ago, toward the end of his long and productive career at Princeton Theological Seminary, B. B. Warfield challenged this interpretation as it was gaining popularity even in his day. If the Reformation was primarily the birth of the modern world, it would be far more fitting, he suggested, if we celebrated the life of Erasmus rather than Martin Luther. The former was a much more influential figure in this broader sense.

Erasmus sought to correct the corruptions of Rome as much as Luther did. But the "negative reforms" of Erasmus were not enough. Unlike Erasmus, Warfield went on to observe, Luther was determined to take serious sin, the fall, and the corruption of the human heart. Consequently, Luther "branded the teaching that man can save himself, or do anything looking to his own salvation, as a hideous lie." For this reason, Erasmus falls short as a hero of the Reformation. Luther was a positive reformer, and "nothing would satisfy him but that all of salvation – every bit of it – should be attributed to the grace of God alone."

Warfield conceded than many would "talk contemptuously" of the Reformation as the "substitution of one set of theological doctrines for another." But that is exactly what we celebrate, he went on to insist, "the substitution of one set of doctrines which had the promise and potency of life in them for a set of doctrines the issue of which had been death." This substitution, "by means of which the forces of life were set at work through the seething, struggling mass, was the revival of vital Christianity; and this the vera causa of all that has come out of that great revolution, in all departments of life."

Beyond the corruptions of the Papacy, deeper than the issues of purgatory and indulgences, in this substitution here, for Luther "lay the hinge on which the conflict turned." Warfield writes: "Not works, but faith; not our merit, but God's grace in Christ; not our penances and satisfactions, but the merit of Christ only. When we hear these cries we are hearing the very pulse-beats of the Reformation as a force among men. In their presence we are in the presence of the Reformation in its purity."

As Luther developed this teaching, he took on Erasmus as much as Rome. Both denied the Augustinian truth of the corruption of the human heart. Erasmus was as content as Rome with a religion of "mere moralism": be good and it will be well with you.

According to Warfield, the Reformation was a religious movement, and specifically the substitution of one system of religion for another: "What [Luther's] heart was aflame with was the desire to launch this new gospel; to substitute it, the gospel of grace, for the gospel of works, on which alone men were being fed. In that substitution consisted his whole Reformation."

This was no reduction of the achievement of the Reformers nor an insult to the genius of Luther. "What Luther did," Warfield writes, "was to rediscover vital Christianity and to give it afresh to the world. To do this was to put the spark to the train. We are feeling the explosion yet."

As churches observe Reformation Day this year, let us take heed to Warfield's reminder by celebrating the Reformation's "great substitution."