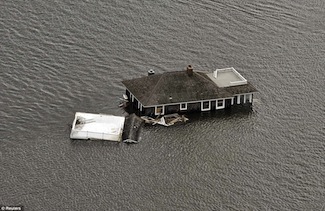 Hurricane Sandy’s Impact on the OPC

In the first three days since Hurricane Sandy’s fury, we have heard reports from many OPC pastors that their congregations had weathered the storm with little or no impact. Many do continue to be without power, and this is certainly beyond inconvenient. But we are not yet aware of any loss of life, and little loss of property in the many reports we have received.

There were three regional areas from which we had received little information and in which we feared the greatest impact. These three areas were Wildwood, New Jersey; Toms River, New Jersey; and Long Island, New York.

Yesterday, November 1, David Haney and I met with Pastor Jim Zozzaro and Elder Jon Stevenson in Wildwood, New Jersey. We met over lunch at the A&LP sandwich shop in Wildwood, owned by Joe, a member of Calvary OPC in Wildwood. We could not believe the footage that Joe shared with us of the two feet of sea water sloshing up against the front door just two days before. The restaurant had been so meticulously scrubbed down and cleaned up by his diligent staff and was once again serving up its famous cheese steak sandwiches! His restaurant is a good picture of how much of Wildwood has responded to the effects of the storm. They have been able to clean up and move on! At 2.5 feet above sea level, they are accustomed to cleaning up after several feet of flooding caused by heavy storms backing up the city storm drainage system. We can be thankful that the impact of the storm on the two OPC churches and members in Wildwood and the Boardwalk Chapel has been minimal, all things considered! Praise the Lord! (Chapel director Jon Stevenson has completed a report on the Chapel properties.)

The Tom’s River area is a very different story. Pastor Jim is the ministerial adviser for the OPC there. For the past five years, this congregation has been renting a facility across the bay on the barrier island community of Seaside Heights. The Seaside area, as we understand it, has been absolutely devastated. Unlike the barrier island community of Wildwood which is seven blocks wide, Seaside is a very narrow island—only four blocks wide at most! This area, on the north side of the eye of the storm, received the brunt of the storm surge. Currently, the government officials are not allowing anyone on the island, as responders continue to perform search-and-rescue operations and seek to defuse the danger of exposed gas lines. It is not anticipated that anyone will be allowed on the island until next week at the earliest.

Several church members’ homes are on the Seaside island. Most had evacuated prior to the storm, and we understand that those who did weather the storm in their residence on the island survived the tumult. On Saturday, we hope to meet with the church leaders in Toms River to learn of the specific needs of the church families and how we might help. Please pray for a good outcome to this meeting and that the Lord would bless us with clear direction going forward.

Regarding Long Island, we understand that much of this region, including many at the Franklin Square OPC, are without power. We also have reason to believe that potentially five or six church members’ homes have been flooded as a result of the heavy storm surge that pushed up against the southern edge of Long Island. We plan a drive up there tomorrow with some generators, fuel and water, with the hope of assessing the needs that might be there. Please pray for safe passage and a successful assessment.

We are thankful to hear of many desiring to help. It is reasonable to anticipate opportunities for teams or individuals to help both on Long Island and in the Toms River area. Thank you for your patience in allowing us the time required to coordinate this response effort and to allow the first responders to finish their work of making conditions safe for us to enter.

Our Lord is master of all! We rely on his help in all things. Please pray for the many who are hurting from this natural disaster and that we might know how best to minister to our brothers and sisters in Christ and to bring that cup of cold water in the name of Christ to those who don’t yet know him.