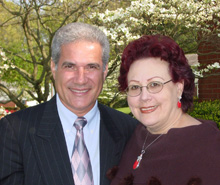 Puerto Rico and New Jersey have suddenly come very close together in the Orthodox Presbyterian Church. On Sunday, June 18, Rev. Milton Villanueva was installed in the capital city of San Juan as an evangelist by a group of ministers and elders from the Presbytery of New Jersey. His call: to raise up a church of the OPC there! It was a joyous occasion as 96 people packed into a private home for the solemn service.

Connections between the two geographies have been growing since Camden, New Jersey OP church planter Ben Alvira began following up contacts in his native land. One of those contacts was his friend Villanueva, who had begun to work with a group of 75 believers and their children. With Milton's careful instruction the group turned to the Reformed faith and called themselves Iglesia Cristiana Jesus es la Verdad (Jesus is the truth). The contact was reported to the Presbytery's Committee on Home Missions which sent representatives to meet with the group and Rev. Villanueva. In late April he was examined and received as a minister of the OPC and was called to serve as an evangelist in San Juan.

Singing, celebration, good food and gift-giving followed the joyous installation event attended by the New Jersey delegation of Spanish-speaking ministers and elders and their wives. And the delegation warmly invited the 29 families of Iglesia Cristiana Jesus es la Verdad to become part of the Regional Church of New Jersey under the leadership of the competent and caring pastor they had just installed.

Pictured above are Rev. Milton Villanueva and his wife Carmen.