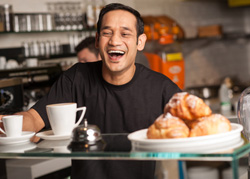 Serving God Where We Are

Lucy is every store manager’s dream. She’s the customer’s tour guide, informant, advocate, and entertainment. When she’s not helping a customer, she’s busy stocking shelves or designing and setting up attractive displays. To see her, you would think that she’s very happy with her job. She is. But she’s also troubled. She laments, “If only I had some kind of ministry of my own—something that really counts.”

No one at George’s church can steer a conversation around to the gospel as quickly as he can. And no one at his school has as much trouble staying awake in class. His late-night efforts to win his rebellious peers to the Lord also trouble his parents. They have watched his grades plummet and his household chores go untouched. “I can’t allow the cares of this life to choke the word of God!” he protests.

Should Lucy cut back her hours to have more time for “spiritual activities”? Or should she quit her job and become a missionary so she can do work that is worth something to God?

What about George? Is he really suffering for the cause of Christ and his kingdom? Is he being faithful to the Lord’s calling?

Lucy does well to desire to please God by praying and sharing the gospel with those in need. Nevertheless, she is wrong to think that God finds no pleasure in the work that she does forty hours each week at the department store. The apostle Paul encouraged slaves with the profound truth that whenever they worked hard to serve their earthly masters, they were, in reality, serving Christ.

“Serve wholeheartedly, as if you were serving the Lord, not men, because you know that the Lord will reward everyone for whatever good he does, whether he is slave or free” (Eph. 6:7–8).

God does not yawn eight hours each day waiting for Lucy to be free to do something worthwhile. He genuinely delights in the work that his people do for him in their various occupations and recreations. And yes, he will on the last day reward all of his good and faithful servants. Those who diligently perform even menial and ordinary tasks for his sake will not be excluded.

God calls some to be pastors and missionaries. But people like Lucy are no less servants of God. It’s just that they are called to labor for him in something other than preaching and teaching the word of God. Our God commands us to devote ourselves to prayer and to let his word dwell in us richly. The same God commands us to serve him wholeheartedly in whatever situation he has in his wisdom placed us. Is faithful prayer more spiritual than faithful work? (This is as absurd as asking if the right wing of an airplane is more important than its left wing.)

Consider George’s professed zeal for the word of God. Its fruit is that he has neglected his duty to his parents and teachers—and consequently to God. George quotes Scripture to warn unbelievers about their rebellion against God. Is his own rebellious neglect of the fifth commandment somehow exempt? Christians do suffer for the sake of God’s word. Such suffering does not include the reprimands that George receives for failing to do a full day’s work.

“We hear that some among you are idle. They are not busy; they are busybodies. Such people we command and urge in the Lord Jesus Christ to settle down and earn the bread they eat” (2 Thess. 3:11–12).

Anyone can speak the words of the gospel. But we are not instructed just to speak words. Proclaiming the gospel God’s way involves much more than speaking words. He commands us to be faithful to our calling in all its aspects.

“Live such good lives among the pagans that, though they accuse you of doing wrong, they may see your good deeds and glorify God on the day he visits us.... Slaves, submit yourselves to your masters with all respect, not only to those who are good and considerate, but also to those who are harsh.... But even if you should suffer for what is right, you are blessed. ‘Do not fear what they fear; do not be frightened.’ But in your hearts set apart Christ as Lord. Always be prepared to give an answer to everyone who asks you to give the reason for the hope that you have. But do this with gentleness and respect, keeping a clear conscience, so that those who speak maliciously against your good behavior in Christ may be ashamed of their slander” (1 Pet. 2:12, 18; 3:14–16).

God calls upon all believers to radiate his own glory and excellence. God’s children are called to arouse the unbelieving world’s curiosity. “Why would you rather suffer ridicule than enjoy doing what we do?” “Why do you love and serve those who hate and mistreat you?” Is not the ideal setting for such spiritual exercise the work-a-day world of the average Christian? We would all do well to evaluate our own time at work in light of Matthew 5:3–16.

There is a reason why Lucy works in a department store and likes it so well. God has been hard at work shaping her life. Everything that makes her who she is is part of her calling in life. In this sense, even unbelievers have a calling from God (Prov. 16:4). God has a particular purpose and plan for each one of his own. So, just at the right time, in the midst of her own unique calling in life, God called Lucy to life in his Son. (She is born again!) For this very reason, the new believer is instructed to give pause before he rushes off into a brand-new line of work.

“Each one should remain in the situation which he was in when God called him. Were you a slave when you were called? Don’t let it trouble you—although if you can gain your freedom, do so. For he who was a slave when he was called by the Lord is the Lord’s freedman; similarly, he who was a free man when he was called is Christ’s slave. You were bought at a price; do not become slaves of men” (1 Cor. 7:20–23).

Perhaps we don’t want to serve our unbelieving boss. We are free to change employers. But if we choose to remain, we are still serving Christ by laboring to benefit this man who hates God. In this sense, a free man has no advantage over a slave. Both are free in Christ to serve him faithfully, regardless of their particular circumstances.

But what is this freedom to which they are called? How has Christ procured it for his people? And what are the consequences of this freedom for the Christian in the workplace? To answer these questions, we must consider God’s law.

The five books of Moses contain moral, ceremonial, and civil regulations. But God’s law is more than mere regulations. It is part of his self-revelation to his people. As such, the law preaches the gospel of Christ’s death on the cross, the empty tomb, and the multinational church (Luke 24:26–27, 44–47; John 5:46; Gal. 3:8). Jesus came to fulfill God’s moral, ceremonial, and civil law (Matt. 5:17) as the great and final Prophet, Priest, and King (Acts 3:20–23; Heb. 5:5–6; Matt. 21:4–5). And as the Prophet, Priest, and King he brings freedom to his people—both now and in the world to come. But what kind of freedom does he bring?

Every Old Testament believer was a slave to a complex ceremonial code, which prefigured Christ as our Priest (Gal. 4:1–5). Today believers may apply God’s moral law to many diverse occupations—not as restricted children, but as responsible adults (Gal. 5:13–14).

Christ our King has done battle for us, and he is at our head. Sin dare not enslave us. At the sound of the jubilee trumpet, it will be seen no more. Our ascended Head rules us through the elders he has given us. We need not lust after our own private ministries. Pastors and teachers equip us to build each other up and fulfill our diverse callings in concert (Eph. 4:7–16). We are not scattered sheep, each having to fight alone. We are his body.