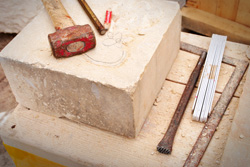 What is the church? What is the purpose of the church? What does it mean for me to belong to the church? These are perennial questions, and each generation of Christians needs to be ready with informed answers. That readiness is so essential not only because such answers are basic to our identity as believers in Jesus Christ, but also because in every generation wrong answers crop up—answers that in varying ways mislead the church and blur its identity.

One of the favorite New Testament pictures or models for the church is a building; the church is God’s house. The church is the great construction job that God, the master architect and builder, has going in the period between the resurrection and return of Jesus (see also especially Eph. 2:19–22).

Specifically, here Peter says that believers, together with Christ, are the building material, and a most remarkable construction material at that—living stone. The uniqueness of the church-house is that as “living stones” they form a “spiritual house.” Christians are to understand themselves as those stones, “dead in your transgressions and sins” (Eph. 2:1, 5), that God, the sovereign Savior, has picked up off the rubble heap of sinful humanity, enlivened by his Spirit, and built together with Christ.

But we must be sure not to miss the special place, the primacy, that Jesus has in this house; he is the living stone. As Peter immediately adds (verses 6–7), he is the “cornerstone” (cf. Eph. 2:20); he is the foundation of the church (1 Cor. 3:11). Believers are built together with Christ only as they are built on him, because they rest on and are supported by him. It is not the other way around; Christ does not rest on them.

So, first of all, believers are not rolling stones in this sense: they are those stones firmly built on Christ, fixed upon the solid rock of his righteousness. We have been bonded to Jesus Christ and nothing can detach us from him; as Paul assures us, not even death itself can separate us from his love (Rom. 8:38–39).

Peter’s word picture enables us to see another, second aspect in which believers are not rolling stones; this aspect, we must appreciate, is inseparable from the first.

In the church-house, as in any building, there are not only perpendicular forces, the vertical lines of support that run down to the foundation, but also horizontal lines, to consider. The stability of any picture depends as well on lateral ties, cross-cutting relationships between the various parts.

We must recognize, then, that our relationship to Christ cannot be separated from our relationships with other believers. Certainly the two must not be confused, the vertical with the horizontal. That often happens today, in the confused notion, for instance, that I find Christ in other human beings as such (“Christ in my fellowman”). That sort of confusion is serious; it destroys the gospel by denying the uniqueness of Christ and leaving us dependent on our own efforts to save ourselves.

But still our relationship with Christ is not an isolated one. To belong to Christ is to belong to his church. To be built on Christ is, necessarily, to be built next to other believers. To be “in Christ” is to be “with one another.” You simply cannot have the one without the other.

This passage is a graphic and unmistakable challenge to the individualism that plagues much contemporary Christianity, at least in the West. Too often when evangelical Christians hear the word church, what they think of primarily, even exclusively, is a place, a building that I enter once (or maybe even twice or more) a week to worship God and hear his word preached.

Don’t misunderstand. True worship, with sound preaching at its center, is vital; it is the lifeblood of the church. Take away preaching, or even slight its importance, and the church will wither and eventually die.

Still, a deep-seated problem in the church, seriously impairing its effectiveness, is that too many people operate with a “preaching station” model of the church. The church Peter pictures for us is not a kind of spiritual gas station that I drive into on Sundays, tank up for the rest of the week, and then drive away. The church is not a building I come to, but a building I am a part of, so much so that my very identity depends on my place in it.

Despite much popular thinking, the church is not just one, even important, institution of society. Moved by God’s Spirit, we do respond freely to the gospel and join the church willingly. But we must appreciate that ultimately, in the deepest sense, the church is not a voluntary association; it results from God’s sovereign, irresistible activity.

A Christian is not a recluse; there is no place in the church for spiritual loners. One of the great presuppositions of New Testament teaching on the church is captured in the frequently occurring phrases “each other” and “one another.” We need to recognize, then, as our Confession itself teaches (25:2), that ordinarily there is no possibility of salvation outside of the church.

“A rolling stone gathers no moss,” says the old proverb. But that’s not true in the church. Believers, even though they are not rolling stones, are not idle, inactive moss gatherers!

The church is not a mausoleum; it is made of living stones. Nor is it simply an impressive monument, standing there for passersby to look at and admire. Rather, it is a “spiritual house”; that means it’s a place where things are to happen. Specifically, the church is a “holy priesthood” that exists to offer “spiritual sacrifices.” In a word, what Peter pictures is a temple. Just as Jesus foretold (John 2:19–22), the church-house is the new and final temple that replaces and surpasses the structure of literal, inert stone in Jerusalem.

We frequently speak of “the priesthood of all believers.” That is the great truth recaptured especially at the time of the Reformation, the precious gospel reality that sinners are not dependent on human priests, or any other mediator than Christ, to come to God for salvation.

But this passage enables us to think of the priesthood of believers in yet another sense, one not so often recognized. Through Christ, all believers are priests, not only because of their direct access to God, but also because of their service of God. All Christians, not just some, are called to serve God as priests, and that, not as some option, but because of their basic identity. Simply because we (can) do nothing for our salvation, we are called to do everything for our Savior. To be a living stone is to be qualified, by the indwelling power of the Holy Spirit, to offer spiritual sacrifices.

Plainly, spiritual sacrifice is a comprehensive reality. There is no reason to restrict it to a special sector of Christian activity; it includes everything that God wants us to do for him. It is one way of looking at the Christian life in its entirety.

But what is at the core of such sacrifice, and perhaps Peter’s foremost concern as he writes, comes out just a few verses prior to our passage in chapter 1:22: “Now that you have purified yourselves by obeying the truth so that you have sincere love for your brothers, love one another deeply, from the heart.”

Here, “you have purified yourselves” does not refer primarily, perhaps not at all, to ethical renewal or the removal of moral corruption. The language is sacral, with an Old Testament background; it describes being consecrated a priest. So we may fairly paraphrase, “Now that you have been set apart as priests ..., love one another....” With that, the direct link with our passage is unmistakable: spiritual sacrifice begins and in large part consists, we may say, in loving other Christians.

In this connection, at least two things need to be stressed.

First, Peter’s word picture applies to the church at all levels. It refers to the whole, one, universal church in all times and places. It has in view most concretely and directly, so far as our experience is concerned, the local congregation. The other living stones that I’m built closest to, those that are most directly adjacent to me, are those with whom I have (or ought to have) constant contact in the ongoing congregational worship and life of which I’m a part. Spiritual sacrifice “begins at home.”

Second, in the matter of spiritual sacrifice, the love called for, as always in Scripture, is not something vague and indefinite. It is not simply an attitude or feeling; it is not just a “warm glow” toward others (although it may often involve that). Rather, it expresses itself, like God’s love for his people, in concrete deeds of love. In unremitting, virtually inexhaustible ways, it seeks the best for others (1 Cor. 13:4–7). Spiritual sacrifice is self-sacrificing love for God and others. Because Christians are not rolling stones, they are to serve one another.

Love one another from the heart, continually. That’s difficult, very difficult—especially when we get to know each other. Inevitably we discover in others, as they discover in us, a lot that is unlovable, unattractive, and difficult to live with. We might ask, then: this priestly service of spiritual sacrifice, who is capable of it?

The answer, of course, is that no one of us is; of ourselves, none of us has the “secret.” And that’s why the message of the New Testament is not a “try harder” pep talk, not a message of positive thinking or “self-esteem,” but the gospel, the good news of who we are in Christ and what God in Christ has made the church to be.

Remember, finally, that the gospel and its effectiveness is at stake in all this. For today, as always, the world is watching, even when it may not be aware of doing so, to see if there really is a difference between itself and the church, whether being a Christian is all that different. What then is it to think if it sees there, in the church, the disharmony and discord, the strife and self-centeredness it is all too familiar within itself?

May God grant to the church in our own time a clear sense of identity—for believers to see that they are no longer rolling stones, drifting about aimlessly in the deadness of their sins, but living stones, firmly built on Christ and together with other believers. May he grant that as we are with each other in Christ, we may be for each other more and more, to his glory.

Dr. Gaffin is Professor of Biblical and Systematic Theology, Emeritus at Westminster Theological Seminary in Philadelphia. This article first appeared in