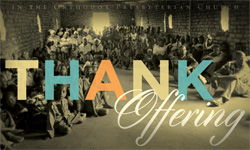 The 2013 Thank Offering: Giving that Helps the Church Serve

Each year near Thanksgiving, the Orthodox Presbyterian Church gives us a special opportunity to share more than our weekly tithes and offerings with the Thank Offering. These special gifts become the finishing touch to our year of giving, which is called Worldwide Outreach. They enable the OPC to answer the cries for more missionaries, more shepherds to “grow” new churches, and more interns to become shepherds and missionaries to God’s flock.

Our denomination hopes to receive $850,000 in the Thank Offering this November. Those gifts would be the final part of this year’s Worldwide Outreach. The 2013 goal of WWO, which was set by the General Assembly, is to receive $3,695,000 to primarily fund the work of our denominational program ministries—the Committees of Home Missions, Foreign Missions, and Christian Education.

The Thank Offering tops the year of giving, making up about a quarter of the budget for Worldwide Outreach. A generous Thank Offering is hoped for this year because overall giving has been less than anticipated. At the end of September, gifts to Foreign Missions were $75,818 below budget, giving to Home Missions fell $72,307 under budget, and Christian Education’s gifts dropped $29,376 under expectations. Overall that means that WWO was $177,501 or more than 8 percent behind the year-to-date budget. To meet this year’s total goal for WWO, the OPC must receive by the end of the year $1,729,402 or 47 percent of their budget, which includes $850,000 through the Thank Offering.

Without such giving, the work of the church would likely change. “Unlike our U. S. government, when goals are not reached, the work of our Worldwide Outreach must be pulled back to come in line with actual income,” said David Haney, director of finance and planned giving. “This could mean fewer foreign missionaries, less U.S. church plants, and not as many interns. Each of the Worldwide Outreach committees maintain reserves to minimize the impact of missed goals, but ultimately, the ministries must come in line with the gifts of Orthodox Presbyterian churches and membership. We do not have an endowment to rely upon.”

Although the $850,000 Thank Offering goal may seem ambitious in light of the current economy and drop in giving, historically the church has been very generous, even during difficult times. In 2011, the Thank Offering was more than $67,000 above what was hoped for and last year churches and members gave more than $133,200 above that year’s goal of $800,000.

Haney hopes that this year’s Thank Offering will help the OPC to continue its ministries around the globe. “The Thank Offering is intended to be ‘special giving,’ voluntarily donated over and above the tithe, to encourage, sustain, and even enable the expansion of Worldwide Outreach ministries.” Take a look at the impact your gifts have on these denominational committees.

Through September of this year, the Home Missions portion of the Worldwide Outreach budget current shortfall is $72,307 or 11.2 percent under budget. Without sufficient funding, John Shaw, Home Missions general secretary, would have to tell the 20 or so groups that currently meet for worship and Bible studies that their works “might go without a shepherd for at least the next year until we have the resources to support a man. Obviously, this is detrimental to their development into a new church.”

The problem is compounded at the presbytery level. “Presbyteries lose motivation to start new works because they don’t expect funding to be available to support a man when the work is ready for that next step,” said Shaw. “How can you start new churches if you lack the funds to send pastors to the work?”

As small Bible studies grow, they need church planters. “Available funding allows Home Missions to assist presbyteries put church planters in place,” says Shaw. “Great opportunities are before us in Grand Rapids, Michigan; Anaheim Hills, California; Gaithersburg, Maryland; and other communities across North America and the Caribbean. We are looking to the Lord to provide the necessary funds to establish faithful, confessional, Reformed and Presbyterian churches in as many places as he allows.”

A generous Thank Offering would help Home Missions support more church planters to serve the additional new works in development. “We would love the opportunity to help them sooner rather than later,” said Shaw.

Our tithes and offerings to WWO and last year’s Thank Offering support 18 full-time foreign missionaries, two ministers who work as part-time missionaries, and the administrative support for 14 missionary associates in eight countries. There are also half a dozen opportunities developing for mission works in other countries.

The giving also helps to fund the Mobile Theological Mentoring Corps. which sends out OPC pastors to countries for two to three weeks at a time to help train and mentor leaders in indigenous Reformed churches. The Committee on Foreign Missions hopes one day to send out MTMC teams to help growing churches in Austria, Switzerland, Columbia, Kenya, Malawi, Sudan, the Congo, and Liberia.

That work may be limited if the current trend of giving continues. The current shortfall in the Foreign Mission’s portion of the Worldwide Outreach budget is $75,818 or 9.2 percent under budget.

Foreign Missions’ greatest need in 2013 is “to send reinforcements to our existing fields,” said Mark Bube, Foreign Missions general secretary. “We don’t have the money to open new fields, but we are trying to reach out with the Mobile Theological Mentoring Crops and exploring opportunities there.”

A family has already been approved to serve as missionaries to Mbale, Uganda, but cannot go until funds are available. “Realistically we don’t see that happening until the middle of 2015,” said Bube. “We have evangelists working alone, where they desperately need a missionary colleague.”

If the church is unable to fully support the Thank Offering and World Wide Outreach, “We’ll have to seriously contemplate bringing one or more missionaries home,” said Bube. “Our reserves are nearing exhaustion. We might even have to close a field.”

Our Lord often overrules our financial concerns. If the budget is met and the Thank Offering is generous, Bube said, “We would fill in many holes for much needed works, sending additional missionaries in China, Ethiopia, Haiti, Uganda, and Uruguay. If the door opens again in Eritrea, we’ll want to get people back in as soon as possible.”

Thankfully this situation is completely in the Lord’s hands. “We trust the Lord to provide,” said Bube. “We walk by faith.”

This year Christian Education was blessed with the largest number ever of interns—sixteen summer and eighteen yearlong interns. To help churches support these interns, the Committee on Christian Education canceled the summer session of the Ministerial Training Institute of the OPC and dipped into their reserves. “We spent money on the interns because we believe it was the right thing to do and we want to serve the church,” said Danny Olinger, Christian Education general secretary.

Since most of these yearlong interns serve half their time in 2013 and half in 2014, the CCE needs to support these churches over two budget years. That may be a challenge because Christian Education’s funding has fallen $29,376 or 12.8 percent below budget.

While there is a budget shortfall, Olinger is appreciative of the tremendous giving of the OPC. “The giving is extraordinary for a church of our size,” said Olinger. “The CCE is truly blessed with the giving we receive and it’s our goal to be faithful stewards.”

“The nature of the work of Christian Education is that it affects the whole church,” said Olinger. “We have internships for men to prepare for the gospel ministry; MTIOPC as supplemental training for officers, licentiates, and men under care; and the Timothy Conference for teens. We also try to educate the church through our website OPC.org and New Horizons. A strong Thank Offering helps us serve in all these areas and more.”

While sitting in the pews this November, let us prayerfully consider how we may give above and beyond our weekly tithes and offerings to the Thank Offering. It is a wonderful way to thank God for all he has done for his church.

When putting your gifts in the Sunday offering, please use the envelopes from your bulletin or specify if the gifts are to go toward the Thank Offering.

If you would like to give to Worldwide Outreach, please note the word “DONATE” on the blue line near the top of the OPC.org home page. The PayPal donate button is at the bottom of the page.

Thank you for giving the gift that helps the church to serve.