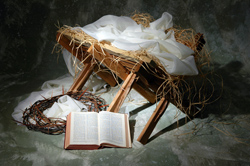 Why Did God Become a Man?

In the eleventh century, Anselm of Canterbury wrestled with the question, Cur Deus homo? (Why did God become a man?). His book-length answer is still a classic. Our Lord Jesus gave his own pithy answer in Luke 19:10, “For the Son of man came to seek and to save the lost.” What does our Lord affirm here?

Jesus affirms that he is “the Son of Man.” This was his favorite self-designation. The Gospels mention his calling himself the Son of Man some eighty times. William White, Jr., explains that this title reflects Daniel 7:13, where the “Son of Man” is one to whom is given universal and eternal authority, glory, and sovereign dominion. He is one from among men to whom is given divine prerogatives. Since only God can receive such prerogatives, the Son of Man is a God-man (Dan. 10:16). Thus, the Son of Man, Jesus, descended from heaven (John 3:13) and was dependent on God, as he had nowhere to lay his head (Matt. 8:20). He exercises an authoritative and redemptive mission (John 3:14). He is the universal Lord (Matt. 28:18; cf. Dan. 7:13–14) and has total responsibility and authority for judging the world (Matt. 13:41–42; 19:28). (Theological and Grammatical Phrasebook of the Bible, p. 102 [Moody Press, 1984]. Cf. Geerhardus Vos, The Self-Disclosure of Jesus [Eerdmans, 1954].)

So when Jesus calls himself the Son of Man, he does much more than identify himself as having a human nature. He reveals himself as God incarnated as the Last Adam, the true Man, the Man of God’s right hand, the Messiah, the King, the Savior, Lord, and Judge! Compare Daniel 7:9–14 and Revelation 1:12–18. It’s an amazing claim.

“The Son of Man Came”

Even more amazing is Jesus’ claim that “the Son of Man came.” A few years ago, PBS aired a program which claimed that Jesus was just a good teacher. It alleged that later Christians fabricated claims that he was the Son of God and the Messiah. This view was broadcast all over the country. Tragically, this same view is proclaimed from many pulpits across our land. But this is not the view of God’s Word! It is not the view of Jesus! It’s a damnable lie!

Both Jesus and the Bible insist that “the Son of Man came.” It wasn’t happenstance. It wasn’t a delusion. It was a purposeful mission.

“ ‘I tell you the truth,’ Jesus answered, ‘before Abraham was born, I am!’ ” (John 8:58 NIV; compare Ex. 3:14). Before he was conceived and born, Jesus existed eternally as the second Person of the Godhead. That should never cease to amaze us! “The Son of Man came.” Without ceasing to be God, God really did become a man! It’s a huge mystery, a wonder-filled mystery, but it’s true.

Some people reject the miracle of the virgin birth as too incredible, yet claim to believe in the Incarnation. But the Incarnation was the most miraculous of all miracles! If you believe in the Incarnation, it should be easy to believe in the subsidiary miracle of the virgin birth. The Incarnation is the most mysterious of all mysteries! It involves the triunity of God, one God existing in three Persons. It also involves the “hypostatic union,” the union of two natures (divine and human) in one person, the Lord Jesus. “And the Word became flesh, and dwelt among us, and we beheld His glory, glory as of the only begotten from the Father, full of grace and truth” (John 1:14 NASB).

The Son of Man came! But why did the second Person of the Godhead become a man?

“The Son of Man Came to Seek … the Lost”

We need all sorts of things—important things, like peace, security, education, prosperity, happiness, and companionship. But none of these things is our central need. Our central need is for salvation, since we’re lost. That’s the root of all our problems.

Above all, being lost means that we are separated from God. Sin creates a great estrangement between us and the God who created us. Our corruption, on the one hand, and God’s holiness, on the other, keep us apart. The Bible doesn’t mince words about this. It says we’re “lost,” “enslaved,” “blind,” and “dead.” Furthermore, when we’re lost from God, we’re lost from everything.

Loud thunder woke a little girl one night. The storm got worse, and she was terrified. Her parents took her into their bed to comfort her. In the morning, they got up while she slept on. Later she came out crying, “Mommy, I looked in your bed, and you were gone. And I looked in Daddy’s bed, and he was gone. Then I looked in my bed, and I was gone, too!”

And the great news is that God became man “to seek … the lost.” Salvation is not first of all my seeking and finding Christ. “As it is written: ‘There is no one righteous, not even one; there is no one who understands, no one who seeks God’” (Rom. 3:10–11 NIV). Both Scripture and experience confirm that, left to ourselves, we sinners will look anywhere and everywhere except to Jesus Christ!

I sought the Lord, and afterward I knew
He moved my soul to seek him, seeking me;
It was not I that found, O Savior true;
No, I was found of thee.
(Revised Trinity Hymnal, #466)

“The Son of Man Came … to Save the Lost”

Note well: Jesus does not say that he came just to make salvation possible for the lost. He says that he came “to save the lost.” This is so important! If Jesus merely made salvation possible, and if salvation becomes actual only if I do something, then the bottom line is that I must save myself. Jesus might help, but the decisive factor boils down to me. And that leaves me without hope. For what the Bible says is true: I’m lost. I’m helpless. I can do nothing for myself. Apart from his grace, I cannot even want to do something. With Charles Spurgeon I acknowledge, “If I have to add even one stitch to the robe of my salvation, I am lost.”

Thank God, Jesus Christ came not merely to make salvation possible for the lost, but “to save the lost!” His life, death, and resurrection literally guarantee the full salvation of all those for whom he lived, died, and rose. The living, exalted Christ personally and effectually applies his saving work by his Word and Spirit to each of his elect people. Jesus said, “All that the Father gives me will come to me, and whoever comes to me I will never drive away. For I have come down from heaven not to do my will but to do the will of him who sent me. And this is the will of him who sent me, that I shall lose none of all that he has given me, but raise them up at the last day” (John 6:37–39 NIV). Our Lord Jesus is a Savior who truly saves! The great news is that salvation—full and free—is found outside of us. It’s found in Jesus Christ—Jesus Christ plus nothing. Put your confidence only and totally in Jesus Christ, the Son of Man, God incarnate.

Why Does Jesus Say This?

Evangelistic, missionary passion welled up in Jesus’ heart. He came for that very purpose—to seek and to save the lost. That is our hope. That is our salvation. We were like Zacchaeus, without hope and without God in the world. Then the Son of Man came and sought us and saved us! How then can he be anything other than our deepest passion and our foremost mission? Let us therefore renew our commitment both to know and to make known the Son of Man.