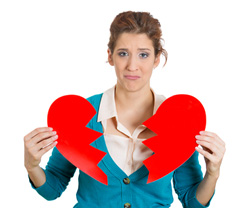 Betrayal is a violation of the Ninth Commandment to not bear false witness against your neighbor. This is so because a betrayal usually takes place when someone breaks your trust after you had considered them to be trustworthy for an extended period of time. And that is what makes it so painful.

These days, as truth becomes less of a virtue and more of a casualty, betrayal is becoming more common.

Have you ever been betrayed? It takes many shapes and forms:

If any of these instances sound familiar, you know just how much a betrayal is the emotional equivalent of having the rug pulled out from under your feet. You had thought that you were on solid ground with your spouse, friend, family member, co-worker, pastor, or fellow church member. You thought you had established a level of comfort with them, so you opened yourself up to them, putting yourself at risk.

And then, it happened: they betrayed your confidence, stole your money, humiliated you, or took credit for your hard work.

It is for this reason that betrayal makes a person less likely to trust again: having had it happen once, why would you want to have it happen to you again?

So what is to be done about betrayal? The first step is to recognize something very important about ourselves: it’s in our human nature to do it.

When Adam sinned in the Garden of Eden, he betrayed God, his creator who loved him and allowed him to dwell in His presence, provided that he obey God’s one command to not eat of the tree of the knowledge of good and evil. This was his divinely-mandated responsibility. So when Eve gave him the fruit from the tree, Adam not only betrayed God; he was derelict in his duty.

Adam’s failure didn’t end there: when God confronted Adam with his crime, he responded, “The woman whom you gave to be with me, she gave me fruit of the tree, and I ate.”

In saying this, he sought to deflect the blame for his sin, and place it upon God and his own wife. Granted, the serpent did tempt Eve, but God never gave her that responsibility to not eat from the tree; it was only to her husband. Hence, Adam’s failure was two-fold: not only did he eat the forbidden fruit and fail to protect his bride; he also betrayed her and God when confronted with his transgression.

This recounting of the story of the Fall isn’t just important because of Adam’s foolish statement. In Romans 5:12, Paul explains the full ramification of what Adam did: “Therefore, just as sin came into the world through one man, and death through sin, and so death spread to all men because all sinned.”

This verse speaks of the doctrine of imputation, which simply means to credit something to someone else’s account. What Romans 5:12 teaches us is that the guilt of Adam’s sin was imputed to the entire human race. It’s why David, as he reflected upon his sin with Bathsheba (and hence his betrayal of her husband, Uriah), said, “Behold, I was brought forth in iniquity, and in sin did my mother conceive me” (Psalm 51:5).

All of that to say, why do people betray one another? Because we inherited Adam’s sinful nature, and the guilt of it was imputed to all of us. Just as it’s in a dog’s nature to bark or a fish’s nature to swim, so it is in our nature to sin, which includes acts of betrayal.

On this point, we have to be brutally honest with ourselves: while it’s true that we have all been stung by the betrayal of others, is it not equally true that we have at some point been on the giving end? Is it not the case that we are all too quick to recall (and even amplify) certain instances where others have hurt us, and minimize the times that we have hurt others? And if we have been guilty of caricaturing with broad strokes those who have betrayed us, is there not a chance that those whom we have hurt have done this to us as well?

Granted, it may be true that you did not betray someone else to the same degree that others have betrayed you. Perhaps someone told you something confidential, and you later “let it slip.” Such a slip-up might seem relatively small, but it’s still a betrayal of trust. This is why we should all be cognizant of and humbled by the fact that we are all guilty of this sin, and have the potential to commit it. This is the first and necessary step to recovery.

The second step is to realize that if you are in Christ, you have been saved by the ultimate betrayal. Recall that Judas went to the authorities and handed over his Lord over for thirty pieces of silver.

This was not the only betrayal that took place: as Christ said would happen, Peter would deny knowing Christ three times, despite the latter’s protestations to the contrary.

What is the significance of this? John 13–17, what’s commonly called the Upper Room Discourse, is one of the most intimate sections of the four Gospel accounts. It was here that Jesus:

Suffice to say, the disciples who were with Him during these intimate moments were truly blessed.

Almost immediately after this, Peter betrayed Jesus. Let us not forget that along with James and John, Peter was part of Christ’s inner circle. These three had the privilege of witnessing some of the most spectacular events of Christ’s life, including the resurrection of Jairus’ daughter, and the transfiguration. And in addition to His deity, Christ is fully man with all of the essential properties therein. He expressed emotions as we do, including anger at the money-changers in the temple and sadness at Lazarus’ death. Surely, then, He also felt the sting of Peter’s betrayal.

Peter thought this spelled the end for him. Not so. It’s interesting that in Mark’s account of the resurrection, the angel at the empty tomb told the women who came that morning to tell the disciples “and Peter.” This was a sign to Peter of Christ’s mercy.

The irony could not have escaped Peter. Neither could the reality of Christ’s great love for him.

What happened between Jesus and Peter is a model for us. Jesus forgave Peter. This can be hard to do, especially when it is a fellow Christian who has betrayed you: because you are united to each other through Christ, the betrayal hurts even more. But because Christ forgave Peter, so too should we forgive those who have betrayed us.

Yes, there will be times where you have to confront someone because they have betrayed you. As much as possible, this should be done with the right balance of firmness and gentleness. But whatever the outcome, you need to forgive; as Paul told the Colossians, “as the Lord has forgiven you, so you also must forgive.”

That should be our guiding principle in forgiving the betrayal of others. Consider the sins which the Lord has forgiven you: the lies you’ve told, the harsh comments you’ve made, the times you have not honored those whom God has placed in authority over you, the times you have coveted someone else’s possessions, and so forth. In Christ, you have been forgiven all of them.

Now, let us consider Paul’s words again: “as the Lord has forgiven you, so you also must forgive.”

A final point: God has not only forgiven you on account of Christ; He has adopted you into His family. This means that you are now a member of His family, and it entails great security, as God does not revoke His own promises. Indeed, Christ said that no one can snatch all who are His out of His hand, Paul says God will see our salvation through to the end, and that nothing can separate us from the love of God in Christ Jesus.

As a believer, you are not promised a trial-free life. But you are promised that He will never leave you nor forsake you. Not only will He will never betray you, but read what one New Testament writer says about your eternal destiny which God has guaranteed you:

“Blessed be the God and Father of our Lord Jesus Christ! According to his great mercy, he has caused us to be born again to a living hope through the resurrection of Jesus Christ from the dead, to an inheritance that is imperishable, undefiled, and unfading, kept in heaven for you, who by God’s power are being guarded through faith for a salvation ready to be revealed in the last time.”

That statement means a little more when you consider who wrote it: it was Peter.