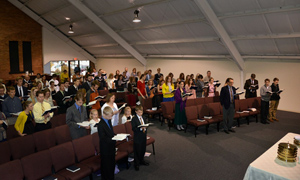 A New Home for Hillsdale OPC

Several professors from Hillsdale College, and a few students who had Reformed and Presbyterian backgrounds, were the core group when Hillsdale OPC was first formed, so when the congregation began meeting for public worship, it was natural that they gathered in a conference room at the college's Dow Conference Center. Like any church plant, the advantages and disadvantages had to be weighed. The space was not too expensive, and it was convenient for those who had requested that a church be planted. In many ways, the space worked well, but over the years, people from the community asked if they were allowed to attend worship, or if it was "just a college church."

While some community members were hesitant to go to church at the college's event center, some did come. Students came in droves – both students with OP backgrounds and students who didn't know what the Reformed faith was. They came, stayed, and many joined. After graduation many have moved to other parts of the country and transferred their membership to local OP churches. The Dow Center provided a wonderful opportunity to minister to students, who now make up about half of the congregation on Sundays when school is in session.

Still, Hillsdale OPC was limited by having space only on Sundays, and by not having a place to reach members of the broader community. So a building search committee was erected, and leads turned into visits, and visits turned into hopes, but for one reason or another, they fell through – until last summer.

A building, which happens to be the town's historic New York Central Railroad Depot, became available, and seemed to have promise. It is located in the community, but only a few blocks from the college. The original building had been used as a doctor's office, while a large addition was used as a martial arts instruction space. This large room looked like it would work as an auditorium.

After some consultations, the congregation voted in September to purchase the building. They were able to close on October 28. November was a very busy month with cleaning, painting, building a platform for the pulpit, ordering chairs and a piano, and completing many other tasks to get the building ready to house worship services.

Now that they have been there several months, the congregation is settling in. Already, two families have committed to the work since the move. Also, the congregation has seen more visitors from the community in their first few months in the new building, than they had in the previous two years at the Dow Center.

Pastor Everett Henes has conducted community Bible studies in the town library each summer. This year, three studies are planned throughout the year, because of the availability of the church building. The new building provides space for a nursery. Sunday school teachers also are enjoying not having to share one room for three different classes. Pray for the congregation as they make decisions on how to best use the space available to them.

Praise God with Hillsdale OPC for his provision of this building. Through the generosity of those within the church, as well as student families, everything from the chairs to the piano were paid for, so that nothing came out of the church's savings to furnish the building. The congregation pitched in generously to get the building ready for the church's use. Pray that God will continue to provide financially as the building's many benefits come with increased financial costs. Pray too, that the congregation will adjust well to the responsibilities of owning a property.

Please check out www.hillsdaleopc.org to learn more about the congregation.