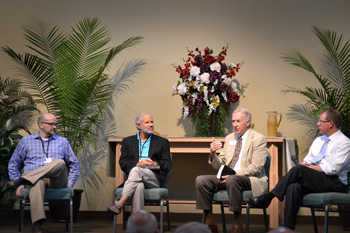 A conversation in a coffee shop led a man to worship at Redeemer Orthodox Presbyterian Church in Ada, Michigan last Sunday. He had met associate pastor Jim Mong at the shop—something Mong had hoped would happen after he attended the pre-General Assembly conference on evangelism earlier this month. Pastor Mong was encouraged at the conference to act on things he’d been thinking about for some time, so he went out to study with business cards in hand.

About 130 OP members joined Mong at Redeemer for a conference on evangelism prior to the beginning of General Assembly. The Committee on Home Missions and Church Extension sponsored the event, which featured presentations by retired Reformed Presbyterian Church of North America minister Ken Smith, Bill Welzien of Keys Evangelistic Ministries, and Dale Van Dyke, pastor of Harvest OPC, Wyoming, Michigan.

When considering the invitation to speak, Ken Smith thought, “I don’t know a thing these guys don’t know.” Then he added, “I’ve learned over the years to be an encouragement, and if I can encourage you in this work, then I will have accomplished my purpose.”

Many learned of Ken Smith from the book The Secret Thoughts of an Unlikely Convert, Rosaria Champagne Butterfield’s account of her conversion. Pastor Smith and his wife had developed a friendship with her and witnessed to her. Pastor Mong learned at the conference that Smith’s letter to Butterfield wasn’t a one-time thing. “This was a lifetime of ministry—reaching out to people and showing hospitality,” Mong said. “He is committed to pure doctrine, and has a real desire to see people saved.”

Rev. Smith encouraged those listening to remember that each person, created in God’s image, has value and purpose. He also encouraged pastors to train their congregations to think of themselves as evangelists, desiring to see other people, both their own covenant children and unbelieving acquaintances, come to faith.

Pastor Van Dyke’s presentation centered on Thom Rainer’s book Surprising Insights from the Unchurched and Proven Ways to Reach Them. The book presents Rainer’s research which contradicts the church growth movement’s assumptions on the best ways to reach the unchurched.

Rainer’s research dispelled some assumptions related to church growth. He found that people did not want difficult teaching and membership requirements to be watered down. Church names that included a denominational label were not the turn-off they were thought to be. Further, the “formerly unchurched” said preaching and doctrine were far more important factors than worship style and the availability of programs in their coming to a church. Those interviewed also found Sunday school important.

In 2012, about 400 adults were baptized in the OPC. This is one baptism for every 84 members. To be what Rainer considers an effective evangelistic church, the ratio would be closer to 20-to-1.

Van Dyke encouraged attendees to pray, to be biblical, and to be joyful. He stressed the need to give evangelism priority and passion, and have high expectations for members to pursue those in their families and coworkers.

Going Out on a Pier

Rev. Welzien’s home turf is a spot on the pier in Key West, Florida between a tightrope walker and a sword swallower. People from all over the world pass by him as he presents the gospel there. He was as much at home in Redeemer’s auditorium speaking to members of the OPC as he is on the pier. He gave his presentation—one he’s given three evenings a week for the last 28 years—in front of his easel showing how he uses dashes on the paper to reveal words while he speaks.

When Mong was in Key West in Jaunary, he was impressed by Welzien’s example. Redeemer’s outreach efforts aren’t exactly the same as what happens in Key West but they have the same heartbeat.

Franklin Square ruling elder Michael Montemarano has been interested in evangelism for many years. He came to the conference to learn how to do it better and went home from the conference encouraged to push forward.

Montemarano was encouraged not only by the speakers, but the participants. “It was a good showing of men who made it their business to fit this conference into their busy schedules. It’s on the hearts of these churchmen to look at evangelism and improve on what we do.” He added, “Maybe we tend to think that evangelism is the pastor’s work.” He went home ready to continue reminding the members of Franklin Square OPC that they are evangelists in every aspect of their lives.