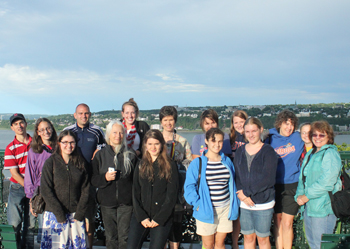 The Lord’s Grace Shining Forth

NOTE: The following testimonial was recently received from River La Belle, the 18 year old son of OPC Pastor James A. La Belle (Presbyterian Church of Cape Cod, Barnstable, Massachusetts), who served as an assistant at an “English for Kids” Bible Camp in Saint-Georges de Beauce, Québec, during the summers of 2012 and 2013. River communicates his youthful zeal for missions in a compelling way which we hope may inspire other young men and women to consider opportunities for short-term missions in the OPC.

“I believe Saint-Georges might be compared with Boston—containing plenty of little urban shops, several stately old buildings, homeless men and women walking the streets, houses stuck close together, and the pervasive, soul-devastating worldview of humanism.

“But reader, do you remember the last time you gazed at the stars on a farm or in the desert? Just as they shine their brightest when the world around us is the darkest, so we observed, in a city so dark, the Lord’s grace shining forth beautiful and bright during our week assisting at an evangelistic “English for Kids” Bible Camp with the members of the Église Chrétienne Réformée de Beauce (Christian Reformed Church of Beauce) in Saint-Georges. [The CRCB is a sister church of Église réformée St-Marc (St Marc’s Reformed Church) in Québec City, of which OPC Missionary to Quebec, Rev. Ben Westerveld, is the Pastor. “English for Kids” camps are held at St-Marc’s, too.]

“Amid teaching lots and lots of English—after a condensed and accelerated crash course by the luminous and servant-hearted Olivia Durham [camp organizer and wife of Pastor Carl A.P. Durham (Covenant OPC, Barre, Vermont)], through God’s grace (despite my many sins!), the children at the camp learned that the Bible is God’s truth, they memorized some of its verses, and they sang songs of God’s love.

“Even more, they saw men and women of all ages travel across a national border into a nearly exclusively French-speaking land just to minister to them, to bring them not only fun and education, but, clearly and sincerely, Christ’s love.

“Today, I still email one girl whom I saw again when I returned with my sister to serve again in 2013. This girl recently (June 2014) quoted me one of the verses she learned in July 2012. It is amazing that God is working there in a land where but a fraction of one percent are professing Christians. Your prayers are needed, brother or sister. But even more, reader, will you go to Québec to serve Christ because of your love for Him and your share in His passion to save His lost sheep?”

River La Belle would welcome hearing from anyone who wants to further discuss his experience with short-term missions.

Visit www.opcstm.org to learn more about short-term service in the OPC!