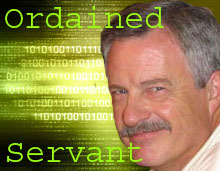 Officers in the church face a difficult task maintaining the peace, purity, and unity of the church. Though this task is at times painful and taxing, it is of the utmost importance to the identity and ministry of the church.

For 14 years, Ordained Servant magazine has sought to encourage, inform, and equip elders and deacons in the OPC to carry out their duties with competent boldness for God's glory. The Rev. G. I. Williamson served as the editor since its inception in 1992, and oversaw the publication of 53 issues.

January 2006 marked a monumental shift in the leadership and publication of Ordained Servant magazine. Rev. Williamson retired as the editor, and the helm of Ordained Servant was then placed in the capable hands of Dr. Gregory Reynolds, pastor of Amoskeag Presbyterian Church in Manchester, New Hampshire.

Dr. Reynolds is seeking to build upon G. I.'s valuable work by expanding the scope of the magazine's focus, including an exploration of the implications of ministering in a digital world. This focus on media and culture will be helpful in equipping officers to deal with the the unique difficulties and opportunities presented in our current context. In the years to come, Ordained Servant will seek to model itself after our founder J. Gresham Machen in seeking to address current issues with cogency, clarity, and an unwavering commitment to confessional Presbyterianism.

In addition to this leadership transition, in January 2006 Ordained Servant underwent a change in how it is published. Previously, church officers would receive a printed copy quarterly. Now, however, the articles are being posted each month (except for the combined issues for June/July and August/September) on the internet. These articles will be printed and distributed annually to churches, ministers, and other officers upon request. During this period of transition, Dr. Reynolds is choosing some of the best articles from the archives to feature on the Ordained Servant pages of the OPC website. The first printed edition is due to be released during 2007.

It would be difficult to overestimate the value of Ordained Servant magazine to church officers. The archives contain a wealth of articles that address many practical issues and situations that Sessions regularly face. If you have not yet read these past issues, take a moment to review the subject index which lists the many different topics covered.