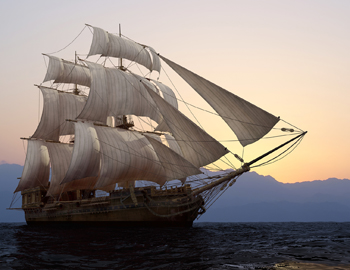 How could anyone be miserable when being suddenly transported to a magical place, and landing on a magnificent sailing ship with a real king aboard?

Eustace was, even though his cousins, Edmund and Lucy, reassured him that Narnia was a wonderful place, full of adventure. They should know. This was their third visit to Narnia, and King Caspian was a dear friend. But Eustace was not at all reassured. He was the same person he had been at home, mean, nasty and altogether miserable.

Lucy and Edmund ignored Eustace as best they could. They were ready for adventure, to see new places and maybe discover hidden treasure. But it wasn't all smooth sailing. Early on they were captured by slave traders. However, the slave traders were soon sorry that they had ever captured Eustace. He was a terrible prisoner, complaining so much that his captors couldn't wait to get rid of him. When Caspian finally came to rescue them, the slave traders were willing to give Eustace away. King Caspian then had the criminals punished and the island restored to its rightful ruler. This was a satisfying end to the first of their many adventures.

Thus far in their journey Eustace had been irritating but tolerated. No one could understand how he could be so blind to the wonders around him and continue to be so miserable about it. That's a lot like people in this world. We think we know how our lives should work, what our rights are, and that everyone should listen to us. And while we are so busy telling everyone this, we miss the wonder of God's love and his offer of the Christian adventure in this life…just like Eustace did in Narnia.

Very soon, Eustace's foolish behavior led him to an awful transformation. Although he probably deserved being turned into a dragon, everyone soon felt sorry for him because of the pain he was in. He suddenly knew that he had gotten things terribly wrong. Now he wanted to change, but he couldn't. He was stuck being a dragon. That is, until Aslan, the great lion, came along and "undressed" him. Aslan tore away the layers of dragon skin with his great claws, causing Eustace pain but never putting him in danger. Aslan removed all the bad parts and made Eustace human once more. Eustace was transformed into a different person.

What a wonderful picture of how God brings salvation to us. Like Eustace, we need to repent of our sins. That means we need to be sorry for all those things we have done wrong and want to change. But we can't do that by ourselves. Just as Eustace needed Aslan to strip away the dragon skins, we need God to take away our sinful nature. That's why Jesus died on the cross. He died in our place, taking our punishment for our sins. But he didn't stay dead. He came back to life, defeating death. It is through Jesus' sacrifice that we can be forgiven and have our sins stripped away from us. And, again like Eustace, we are given a changed heart, and desire to serve God.

Everyone on board the Dawn Treader welcomed the new and improved Eustace. He wasn't perfect, and neither were they. They all had some work to do. You see there were really two missions they had to complete. They were searching for the missing lords beyond the Lone Islands, and they each had some important lessons to learn from Aslan.

Caspian was the first one to learn a lesson. On what he came to call Deathwater Island, he and the others found a pond that turned everything that fell into it to gold. And to everyone's surprise, they saw one of the missing lords at the bottom of the pond. They were tempted to turn a few things into gold to take home with them and to keep the knowledge of this treasure to themselves. They even argued over who really owned it, King Caspian or King Edmund. Suddenly, Aslan appeared and simply walked by. Caspian and the children were startled and forgot about their quarrel at once. Aslan's presence reminded them how they should behave and how close they came to being dangerously foolish.

People often think that because they can't see God or aren't thinking about him that God isn't aware of them. But God's Spirit is always present and always aware of what we are doing or thinking. When we belong to him he watches over us, protects, and reminds us of what is right. He doesn't appear to us like Aslan did to the children, but he does speak to our hearts and minds, reminding us of what he has told us to do in his Word, the Bible. Like Caspian, we can be tempted to be greedy, fail to tell the truth, or take something that doesn't belong to us. That's when we feel a conviction, an uncomfortable feeling that we know we are about to do something wrong. And that is the point where we have to decide to obey God or give in to temptation. This will happen many times in our lives because, even if we are part of God's family, we still need to grow in our faith.

Lucy had to learn that lesson when they landed on the Island of the Voices. She was the one who ventured into the magician's house to help free the Dufflepuds from the invisibility spell. She was very brave and determined to do what she could, but she soon felt tempted by the spell book. She discovered that if she just spoke the magic words, she could be more beautiful than her older sister Susan. Almost at once she felt the conviction not to do it, but she said "I don't care. I will." She was choosing to do something she knew was wrong. But Aslan stopped her by appearing in the page and growling at her. At once, Lucy was afraid and quickly turned the page. At that point she should have just got on with her promise to free the Dufflepuds. Instead, in defiance, she found another spell and spoke it quickly before either her conscience or Aslan could stop her. She deliberately disobeyed, and she was soon very sorry. She had to live with the results of her disobedience.

That's a lot like us sometimes. We feel that everything we are told not to do is so much better than what is right and good. So, in defiance, we choose to do something wrong, just because we want to, just because we can. But it never turns out well. God has set up boundaries, things we should not do, for our own good. He isn't trying to make us miserable with his list of "Don't do these things!" Rather that list of "Don't do…" is for our protection. If we disobey our parents or others in authority, it usually leads to punishment. If we tell lies or steal, we hurt others with our tongues and our actions. It also makes them angry at us. A circle of unkindness or worse is set in motion. How much better if we had done the right thing. That can be very difficult, so we need to ask God to help us resist temptation when it comes our way.

More lessons were in store, with the most terrible one being on the Dark Island, where all dreams come true, and not just the nice ones. It was a horrible place to be lost in and Lucy knew at once that only Aslan could rescue them. She called out to him for help and he responded by sending a light and what looked like a huge bird to guide them to safety. Lucy was sure that she heard the bird whisper "Courage, dear heart," in Aslan's voice.

At some time in our lives we could be in some awful situation, whether we are afraid, in danger, or terribly sad. Everything can seem hopeless as it seemed for everyone on the Dawn Treader. But, God is still there and will help us in the best way, although not always in a way we expect. Sometimes we are rescued from our difficulty. Sometimes we have to continue on, but with God's Spirit at our side, giving us strength and courage. Life is a journey through good and bad times. But with God by our side, helping and protecting us, leading us into what is right, we can trust that he will safely bring us to our destination.

And what a destination it is….to spend forever with God, our Creator and Savior, in perfect harmony. That was what Reepicheep, the brave mouse warrior, was heading towards as he sailed on to Aslan's country. But it wasn't time for the children to go there yet. Instead, Aslan met them, first in the form of a lamb and then as the children knew him, as a lion. They were very sad when they heard this was their last time to visit Narnia. However, Aslan assured them he was with them, even in their world. And one day, they too would go to Aslan's country, just as God's children will one day go to heaven.

Linda Finlayson is a member of Cornerstone OPC in Ambler, PA. She is a children's author and has published 8 books. Her latest book Wielding the Sword was released in May 2014. She has also written other Narnia tracts to accompany Cornerstone's annual Narnia in the Park.