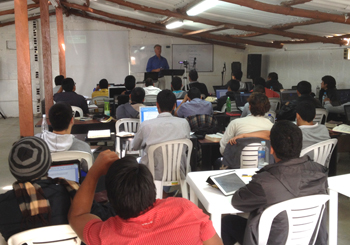 In 2005, a small group of men from Colombia, South America, contacted Orthodox Presbyterian minister, the Rev. Stephen Larson, lamenting the fact that there was no Reformed and Presbyterian church in their entire country; a country of more than 40 million people. They inquired whether they could join the OPC. He encouraged them in a different direction, namely, to look to the Lord to use them to begin planting such churches. In close consultation and fellowship with Rev. Larson, these men decided to follow his advice. Nine years later the Lord has done exactly that! There are currently seven churches in six cities throughout the country made up almost entirely of young families who are very new to the Reformed faith and enamored with its doctrine as set out in the Westminster Confession of Faith and displayed in her worship. Over the years the general secretaries of our Committee on Foreign Missions have maintained close fellowship with this "little flock", making semi-annual trips to encourage, mentor and disciple them at their enthusiastic invitation. During that time several bilingual OP ministers have accompanied Mark Bube and Douglas Clawson for the purpose of tutoring these churches in the distinctives of the Reformed Faith. A translator accompanies Rev. Clawson on each trip.

During the last week of August and the first week of September, it was my turn to go and lend a hand. (As an aside, I went on a short-term mission trip to Barranquilla, Colombia, for the summer of 1977, testing my call to become a foreign missionary, one year prior to my marriage to Jane Crum. What a thrill it was for me to return to this country thirty-seven years later!) I had been assigned to teach on a subject that I consider be the "crown jewel" of all Scripture and the glory of Reformed theology: the doctrine of the Covenant. Accompanied by Rev. Clawson and an interpreter of the highest caliber, ruling elder Miguel Flower from an OP church in Puerto Rico, I taught Bible studies on the Covenant at four of the seven churches in the cities of Cartagena, Barranquilla, Cúcuta, and Bogotá. Rev. Clawson preached (through Miguel our translator) at two churches on the consecutive Sundays of our stay. We each also gave a six-hour lecture/class at a Bible Institute in the city of Medellín. Rev. Clawson taught on homiletics, and I on Covenantal theology. The entire trip was wonderfully rewarding, but for me a highlight of our two weeks came at the end, when we were able to be present at a meeting of the Presbytery of the Presbyterian Reformed Church of Columbia. They met for the dual purpose of ordaining a man to the gospel ministry (at which service Rev. Clawson preached a third time) and for their regular meeting which took place the following day. Our general secretary, Mark Bube, flew in for this meeting, catching up with us in the capitol city of Bogotá. At that small gathering of nine pastors and elders (due to distance and travel expense, not all could attend) and after a presentation by Mr. Bube, the motion was made to petition the OPC, at her next meeting of the General Assembly, to enter into corresponding relations between the two denominations with an eye toward ecclesiastic fellowship in the coming years. The motion was approved unanimously!

The next day, Sunday, was my last day in beautiful Colombia. I had the privilege of preaching in Spanish at a mission work on the outskirts of the city of Bogotá. Twenty-two believers were assembled to worship the Lord! I must say, having served in the country of México as a missionary of the Presbytery of Southern California of the OPC for twenty-five years (until 2008), the pangs of nostalgia were quite strong.

Please keep this group in your prayers. There are other established churches throughout Colombia who have initiated contact with this new denomination, expressing a desire to bring their congregations into the Presbyterian Reformed Church of Columbia! Much guidance and wisdom from above will be needed, along with much prayer. Please join these churches in praying for the growth of the Church in this part of our Lord's harvest field.