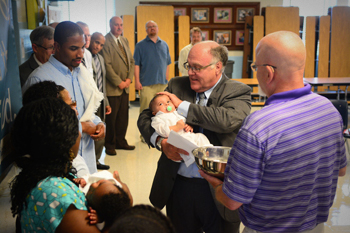 What do you get when you gather people with Roman Catholic, Greek Orthodox and Pentecostal backgrounds? In Gaithersburg, Maryland, you get an OP church plant.

A couple of grocery store coworkers, gifted in communication and bold in evangelism, became convinced of the Reformed faith while listening to sermons and reading Calvin, Spurgeon and others online. As they presented the gospel, they saw people converted, yet realized they needed more teaching. They held Bible studies wherever they could, including the food court at the Lake Forrest Mall.

One summer evening in 2008, the Kluths, a family from Trinity Reformed Church (OPC) in Lanham, was getting ice cream at the Lake Forrest Mall while the Bible study group was meeting, and Mr. Kluth talked with the leader.

After a while, the group was asked to leave the mall because they took up too many seats. After moving to a Baptist church, they were eventually asked to leave again, this time due to doctrinal differences. The Kluths, who had been influenced by the man who hosted a Bible study they attended while living in California, had designed their Maryland home to accommodate larger groups. The group joined with another, and at the Kluth’s invitation, began to gather in their home.

About 20 to 40 people, mostly young, single people new to the faith, met each Friday night. College students who were too far away to attend in person participated through Internet broadcasts over LiveStream and conference calls. As relationships developed, several couples sought pre-marital counseling from the Kluth’s pastor, Gerald Taylor, and were married in local OP churches. Although some have left the group due to doctrinal differences, a solid core remained.

The Presbytery of the Mid-Atlantic got involved about two years ago when Steve Doe was hired as the Regional Home Missionary. The group began meeting for worship on Sundays. Several pastors from around the presbytery have filled the pulpit and given the group good exposure to the broader church. In May, 2013, the four core families submitted a petition to become a mission work. A provisional session of three ministers and two ruling elders was appointed to oversee the group. The mission work held its first public worship service on June 9, 2013. They continued to gather for worship every other Sunday.

The people wanted a mature pastor with church planting experience. They were looking for a teacher and a shepherd. Steve Doe helped them search for the man who would nurture their new love for the Reformed faith. After a lengthy search, the congregation called Ron Beabout to serve as their organizing pastor. He was installed on October 17, 2014. Pray for Ron and his wife, Carol, as they settle into a new home and congregation. Ron has experience in church planting in both the Ivory Coast and in Paris, France.

Pastor Beabout first met the group last spring, and describes the meeting as love at first sight. “They’re so enthusiastic,” says Ron. “They’re passionate for reaching the lost, for the word, and for learning the Reformed faith better.” When he attended their Bible study for the first time, he was impressed with their prayer requests. Almost every one, he said, was for a person being witnessed to by someone in the group.

The relationship between the Beabouts and the congregation continued to grow during a picnic. The event, with nearly six-and-a-half hours of question and answers, went by very quickly, Ron said.

For now, his focus is on getting to know the congregation family-by-family and person-by-person. He said, “I need to get to know them better so I know how to preach the word to them.” Beabout plans to develop outreach plans with the congregation in the coming year, but his current focus on the pastoral relationship doesn’t mean that outreach and evangelism aren’t happening. “They’re doing the work of evangelism,” he said of the congregation. “Their hearts are open and they’re ready to be shepherded,” Ron said. His first sermon series was on Reformed worship, which he hopes will foster the love that they already have.

In recent weeks, five covenant children were baptized and nine communicant members were received. Five more regular attenders are set to make profession of faith in the coming weeks. Pray that the Lord will continue to bless his people in Gaithersburg and that he will call many more to himself.

Beginning December 7, the group will begin weekly Sunday morning worship services. Click here for details and a map. Praise the Lord for this important step.

The congregation is largely made up of young families. Some of the men have shown gifts for leadership, and one is taking an introductory seminary course. Pray that the Lord will raise up leaders from within the group. Pray too, that the Lord will bless the evangelistic efforts of the members and bring many more people to himself.