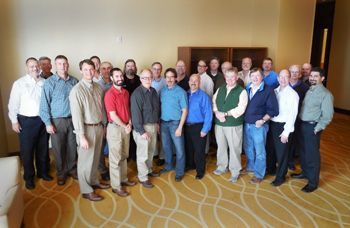 The work of the Committee on Diaconal Ministries (CDM), and its many subcommittees, covers a wide range of responsibilities. The Diaconal Training Subcommittee's task is to encourage deacons throughout the denomination, particularly the members of the presbytery diaconal committees (PDC).

In early November, the CDM's Diaconal Training Subcommittee held its second D17 Summit (the first was held in January 2012), to which each of the 17 presbyteries were invited to send two Diaconal representatives. It was a blessing to see fourteen presbyteries represented, four of which were actually represented by two individuals.

As the Administrator of the CDM, I was given the opportunity to speak to the brothers about the work of the CDM, and to convey a vision of what the labors of a PDC could be.

Rev. Lendall Smith, President of the CDM, explained how the PDC is the "linch pin" in the OPC's network of deacons - locally, regionally, and nationally. A healthy and active PDC can serve as the conduit through which local deacons gain access to the help and resources available to them in their presbyteries and/or the CDM.

Elder David Haney sought to encourage the PDC representatives in one specific area of their ministry - that of caring for the ministers in their presbyteries. It is natural for the PDC to be involved when a minister is suffering from the impact of financial troubles in a struggling congregation. But Mr. Haney presented the idea of taking a more active role on the front end, when ministerial calls and packages are first being considered. Everyone seemed challenged by this suggestion.

Rev. Nathan Trice, Vice-President of the CDM and Moderator of the Summit, challenged those present with the concept of reform. He cautioned that reforms undertaken too quickly are rarely successful, but changes that are made slowly and deliberately, and are carefully thought through, can result in a healthy reformation that is helpful to all in the long run. Rev. Trice provided lists of specific recommendations of changes that could be made to enhance a PDC's effectiveness.

All representatives spent the final hours of the Summit considering and sharing specific steps and timelines for bringing about improvements to the structure and labors of their respective PDCs.

The CDM was very thankful for the many men who made the effort to be a part of this summit, and hopes that these efforts will prove to strengthen the ministry of mercy that is given to deacons locally, regionally, and nationally.

MERCY MINUTE: Please contact me at nakhla.1@opc.org if you would like to receive the quarterly e-newsletter of the CDM, the "Mercy Minute." Thank you.