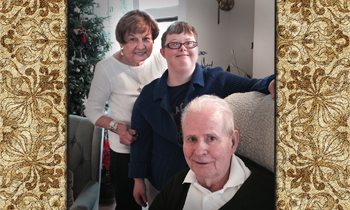 In Acceptance You Have Peace

When Ruth Morton, wife of retired Orthodox Presbyterian pastor George Morton, read this month's article in New Horizons entitled, "Everyone Needs a Mark," she easily related to the story of parents coping with a child with Down's syndrome.

Ruth Morton had given birth to Jennifer, their sixth child, on August 15, 1970. At the time, George was pastor of two OP churches in Western Pennsylvania—New Hope and Harrisville. All seemed normal until they took Jenni to their family doctor when she was six weeks old. He examined her very closely, but said nothing. George finally asked, "Is something wrong with our baby?"

The doctor looked at them with tears in his eyes and said, "Yes, I don't think your baby is normal. I think your baby is a Mongoloid." The doctor told them to confirm the diagnosis with their pediatrician. That doctor later explained that children, who once were considered Mongoloid, now were diagnosed with Downs's syndrome.

Ruth cried on the drive home. Trying to console her, George said, "Honey, don't cry. I'll get another job and earn the money to get all the medication she will need and pay for any operation too."

Ruth realized that George didn't understand what the doctor had told them. "No operation or vitamins will change the size of her little brain," Ruth told George. "She is what she is."

In God's providence, representatives from the Ohio Presbytery and their wives were coming to their home for dinner to place a "call" for George to become the pastor of a church in Eastern Pennsylvania. After dinner, Mary Cummings, wife of OP pastor Cal Cummings, Sr., put her arms around Ruth and asked, "You didn't eat any of your delicious dinner. May I ask why?"

In tears, Ruth poured out her heart. Mary comforted her: "You must come to Pittsburgh and meet my friend who has a child born with Downs's syndrome…and a double hair lip and clef pallet."

Ruth later took Jenni to visit Mary. There Ruth learned: "In acceptance there is peace….The peace that comes from Jesus."

From their fearful beginning, Ruth and George learned a great deal about how to help Jenni. One doctor told them, "Take her home and love her and when she's six years old, put her in an institution." Ruth left clutching her baby. "Not my baby," she vowed.

She became convinced that Jenni could learn like her other five children. "Our children can learn. You treat them like a normal person. They'll just be slower so have a little more patience and understanding."

Over the years, Jenni has learned many of the catechism questions and answers. She knows that God is known by three names—Father, Son, and Holy Spirit. When she calls home to speak with George, she asks for "Minister, Pastor, Father." Ruth often reminds her, "Jenni, he's your dad." "I know he's my dad," says Jenni, who believes her father also needs three names. "But he's my Minister, Pastor, Father."

Jenni's four older brothers and older sister have been very loving and protective of their youngest sister, Ruth said. Over the years they educated their neighborhood about mental retardation. When they played, they expected her to do what they did; only it would take her longer to do it.

As each of their older children went off to college, Jenni wanted to go to college. As they got married, Jenni wanted to get married. Today Jenni is forty-four years old and living in a group home just eight miles from her parents. Jenni plays the keyboard, bowls every Saturday, and has won many ribbons in the Special Olympics. She folds envelopes and assembles components for computers for work. "I'm very happy I'm a productive citizen," said Jenni. "I earn a paycheck."

"We learned to realize God makes no mistakes," said Ruth. "Jenni is our joy. The sooner you learn to accept what the Lord has given you, you can move forward. God doesn't require intelligence to get into his kingdom, just obedience and a childlike faith like Jenni has."