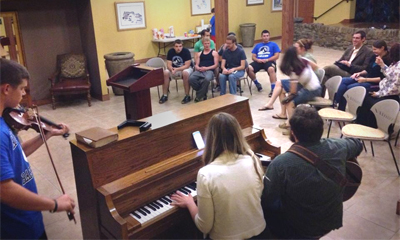 Several families moved to Neon to serve the people of the area through a housing ministry. Over time, these people became convinced of the Reformed faith and the need for a Reformed church. Jim Heemstra, the Presbytery of the South's Regional Home Missionary who was helping the Presbytery of the Southeast, got involved and the first worship service was held in June 2000. In 2001, John Belden, a member of the original group before leaving to finish college and attend seminary returned to Neon to serve as a pastoral intern. He then became the organizing pastor serving the work until 2010.

The congregation bought a storefront building in the heart of Neon about ten years ago and an auditorium has been in use since 2009. Work on the building's second floor has taken longer. While there is still some work to be done, the Bennett family now has a comfortable apartment there. The front of the building has yet to be renovated. It doesn't quite match the nicely renovated interior of the building. Pastor Jay Bennett arrived in 2012. As those before him found, the soil is rocky, but as those before him, he has persevered through the joys and sorrows of pastoring. An OP family from Michigan has moved to the area for work, and recently transferred their membership to NRPC. Others from the congregation have moved away, and last year, for the first time, the congregation had more locals than transplanted people.

Pastor Bennett has prayed since arriving that the Lord will add two new families to the congregation each year, and for the first two years, He has done so. With two families currently in membership classes, it seems that he is pleased to answer that prayer once again. Two other families have begun worshiping regularly at NRPC.

Bennett began working with the Sola Gratia student fellowship at Alice Lloyd College two years ago. The college is about half an hour from Neon in Pippa Passes, Ky. Anywhere from eight to 15 students meet Sunday evenings at 9 p.m. Pastor Bennett is currently going through the 10 commandments with the group. He has built relationships with these students. In fact, though the group formed before NRPC became involved, it has now become a ministry of the church.

Recently, Bennett received a message. "I'm writing to tell you I caved" it said. The writer proceeded to say how amazing it was that just a year ago he was convinced that Sola Gratia was a group of heretics. It was the gentle leading and serious Bible study that convinced him that the Reformed faith is correct, and that he should be worshiping at NRPC.

In Addition to the larger Sola Gratia group, four young men regularly participate in a study of presuppositional apologetics that Bennett leads at the college's café. They are currently reading through Dr. Richard Pratt's book Every Thought Captive.

One married couple from the group is now taking membership classes. Another young man who wants to join has faced strong resistance from his family. As a result, Bennett was able to meet with the young man’s parents' pastor and discuss the doctrines of grace with him. Another family living about forty-five minutes from Neon has also recently begun attending worship. Last Sunday, five students from Sola Gratia worshipped with NRPC. Pray that more will come.

The people of NRPC are thrilled to see Christians come to a fuller understanding of God's word, but they also desire to be used by the Lord to reach the lost. Several members have recently joined Pastor Bennett in going door-to-door in nearby Whitesburg. They have also had booths at fairs and community celebrations in the region. This spring, they plan to go door-to-door on four more occasions, and will host a booth at Pikeville's Hillbilly Days, a festival that draws 15,000 people each year. Pray that the Lord will bless the faithful proclamation of the gospel in Neon and the surrounding towns.

There is still much work to do. At its monthly prayer meetings, the congregation has begun to pray that they will be ready to organize in the next six years, some 20 years after becoming a mission work of the Presbytery of the Southeast. This is much slower progress than a typical Orthodox Presbyterian church plant, but no matter the speed, we are seeing progress planting in this rocky soil. Please pray for the Bennett family and the congregation of Neon Reformed Presbyterian Church as they continue to faithfully scatter seed in Neon. Pray also with them that that the Lord will be pleased to expand their witness to Pikeville, Elkhorn City, Clintwood, Wise/Norton and beyond.