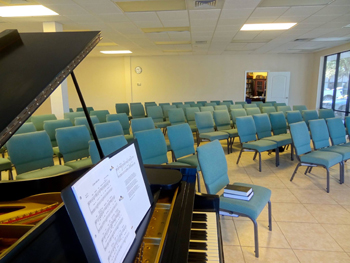 Fifteen months ago, Naples Presbyterian Church held its first worship service at the Holiday Inn Express. That first service wasn't even in the hotel. The conference room they had booked was being renovated, so worship was held next to the pool. The location served as a good place to start, but as more people began to gather for worship, Pastor Eric Hausler asked us to pray for a more suitable location to serve as a worship space and ministry center.

Earlier this year, Hausler was driving past a business center and noticed that the space, which had been occupied by a church, was now empty. He contacted the property manager who told him it wasn't even on the market yet, but he’d look into lease details. In God's providence, the owner was willing to shorten the lease and lower the price for Christ the King, enabling the congregation to move to the space on a busy corner across the street from the airport. It's located in East Naples, which is the group's target area.

Since the space was previously used as a church, preparing to move in consisted of sprucing up and gathering furniture. New lighted signs were installed on the building's exterior. A fresh coat of paint was put on the walls. A door between two offices was converted to a Dutch door connecting the two former offices and creating a nursery.

Back when Hausler attended his first meeting of the Presbytery of the South, he was taken to a storage room containing 80 padded church chairs. "These chairs are waiting for you," he was told. A few weeks ago, two years after Hausler first saw the chairs, one of Lake Sherwood OPC's deacons drove a rental truck to Naples to deliver them.

A PCA congregation in Bonita, FL sold them a baby grand piano inexpensively. Jeff Rosendall, a deacon at Hausler's last congregation - Redeemer OPC in Ada, Michigan – crafted a maple pulpit and communion table. Hausler found much of what he needed for his office at a local thrift store where he had previously rented office space.

Already, several people have stopped by asking if the new church is similar to the former renters. This has given Hausler an opportunity to explain who they are. One member, who has been attending since the early days of Bible studies, is a licensed counselor. Soon one room in the new space will be used as a biblical counseling office.

Naples is currently in "the season" when snowbirds descend on the town. Attendance has been in the fifties, though last Sunday morning it jumped to seventy-two. A van load of men from St. Matthew's House, a local addiction recovery center, regularly come to worship. The first week in the new location two vans were needed to transport all the men.

A reporter from the Naples Daily News also came to the first worship service, camera and notebook in hand. After reading the article several visitors showed up the next week. A member of the local chamber of commerce, Hausler is arranging a ribbon cutting to generate still more publicity.

They view the building is a means to serve God, and not an end in itself, but as Hausler says, "This building is an answer to prayers from around the country." He asks you to pray for young families to fill it. While attendance has been high lately, it drops off in the summer when only locals are around. "We are building a base of solid Christians who want to support a solid Reformed outreach and be fed," said Hausler. "It's not a complicated recipe. Preach the word and offer God-honoring, God-glorifying worship."

In addition to worship and the counseling office, a men's Bible study is held in the building on Tuesday mornings. Hausler cooks breakfast and the men eat and meet. It's something he did in Ada as well. "Encouraging men to be good leaders and giving them an opportunity to build relationships is really crucial to establishing a healthy church," Hausler says.

While the new space is the hub of activity, much still happens elsewhere. The Hauslers still host a monthly family night in their home, and the women of the church meet in homes for Bible study as well. Once a week, Hausler leads a Bible study at the county jail, and follows up with cell visits. Donna Hausler works as a part-time administrator in the chaplain's office and visits with female inmates.

The congregation is currently preparing for a missions team from Lake Sherwood OPC in Orlando, FL. They are also considering how they can reach more people in Naples with the gospel. Pray that they will remain faithful to the Word, and that God will continue to bless them with growth.