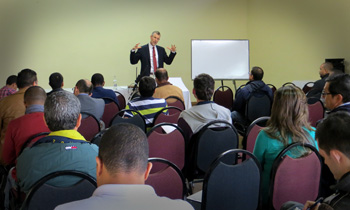 "¡No me maten!" "Don't kill me!" I said as I lay on my back. Four ruffians had thrown me to the ground and were threatening me with memorably long knives. Then, I felt the straps of my backpack cut, and back they ran into the cardboard barrio from which they had emerged a few moments earlier. An unforgettable remembrance from Bogotá thirty years ago.

Colombia is a land famous for its beauty and its savagery. A paradise of natural resources from Caribbean beaches to forested Andean peaks, Colombia has been ravaged for decades by militias funded by drug cartels. Home to 40 million talented and strikingly-handsome people, guards at every apartment building stand testimony to the insecurity that lies underneath the surface. Recently deceased Gabriel García Márquez paints his fictional Macondo with colors that convey not just the passion and elegance, but the brokenness and violence of Colombia all too well.

It was my privilege to return to Bogotá last month. Much had changed. Now grown to 8 million, the high-rises are better furnished and the security staff better dressed. The barrios clinging to the hillsides have morphed from cardboard to block, and there is less misery in the streets. But I was particularly encouraged by a different kind of development. In a land known for traditionalistic Romanism and pervasive spiritism, I had the privilege of meeting a series of ministers and elders who were deeply committed to the gospel of Jesus Christ. I talked with teenagers who humbled me with their well-thumbed Bibles and ready command of Scriptural quotations. I heard university students express a crystal-clear understanding of the Christian faith along with penetrating insights into the postmodernity that surrounds them as well as us. I participated in a conference where church leaders from different Presbyterian fellowships were getting to know and trust one another, hopefully with an eye to joining ranks together one day.

The topic I assigned me was "Biblical Foundations for a Christian World View," in keeping with the emphasis of the conference entitled: "Tu Palabra Es Verdad: Renueva tu mente—Cosmovision Cristiana" [Your Word is Truth: Renew your mind—Christian World-view.] Though comfortable talking about prepositions to unwitting seminarians, I don't consider myself any expert on questions of world-view. Perhaps this turned out for the best, since I was able to ask questions and allow time for significant interaction. We had a number of energetic exchanges which I trust not only helped clarify people's thinking, but helped folk from different groups get a feel for others' personalities and positions. As side blessings, the stunning views of the mountains, the unique delights of Colombian cookery and the presence of that justly-famous Colombian, Juan Valdez, were fine compensations for the thin air and the soup three times a day. We all enjoyed a time of good and productive fellowship (e.g. the brothers in the room next door were chuckling and discussing the things of the Lord till after twelve each night).

I served as interpreter for our Associate General Secretary for Foreign Missions, Doug Clawson. This meant that I was the last one to finish my meals (translating for both sides—you can see how much I enjoyed the food!). But it was a privilege that I had been looking forward to. Doug has such joy in the Lord, and we had a series of ministry adventures together in Cuba a few years earlier. I translated his preaching on two occasions, including a wedding for one of the local ministers. I also gave a recap of my conference lectures at one of the Bogotá congregations. The brethren everywhere seemed very appreciative of our presence and ministry. They are enthusiastic in their desire to grow in their understanding and practice of biblical teaching, and they eagerly invited us back. I was glad to see the way in which a number of the stronger congregations were making use of the opportunities for instructing their own people and others (including numerous Pentecostal pastors) through the Reformation-oriented courses offered by MINTS (Miami International Seminary). And I was much encouraged to see the fruits of three or more publishers producing Reformed literature in Spanish. There was a wide variety of quality literature available at the conference (including books from Poiema, a newly-established publisher based in Medellin whose visionary founder I had the privilege to meet). I was also delighted to visit a bookstore in Bogotá that had an excellent selection of Reformed titles on all major topics. Most of these resources simply did not exist thirty years ago.

I praise the Lord for the opportunity of our church to be of strategic service in fields like Colombia through the Mobile Theological Mentoring Corps. Good seed has been sown by visits over recent years, and further conferences are planned for 2015. The God who created the stunning, multi-faceted beauty of this country (despite all the brokenness and depravity that sinners such as we are have inflicted it) is renewing hearts, stitching together congregations and denominations, and establishing beautiful things among his chosen ones in Colombia.