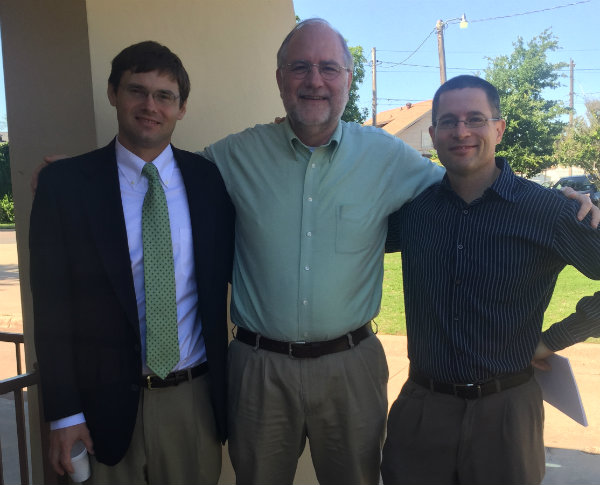 Houston, We Have a Solution

According to Forbes Magazine, Texas is home to five of the country’s ten fastest-growing cities, with Houston topping the list. The city is already the fourth largest in the country. In addition to being populous, Houston is spread out. The population density is a bit above 3,500 people per square mile, compared to New York City, which has a density of more than 26,000 people per square mile. “Houston has redefined urban sprawl,” says Adam York, pastor of Providence OPC in Kingwood, Texas.

This church in Northeast Houston was the OPC’s first church plant in the city. Pastor York arrived in 2002, and the church was organized in 2005. A decade later, there are two Orthodox Presbyterian congregations in Houston. Robert Arendale came to NW Houston in 2012 to serve Cornerstone OPC, which was organized last year.

York and Arendale hope to see a half dozen more churches planted in the city over the next ten years. As it takes nearly an hour to get from Cornerstone to Providence, there is room. The next target for a church plant is Clear Lake, Texas on Houston’s Southeast corner, where a Bible study will get underway next month. Both Southeast and South Central Houston are growing rapidly. Clear Lake was chosen as the site for the Bible study because of existing contacts there.

Both York and Arendale wanted to see Cornerstone particularized before a new work was started. That hurdle was cleared last fall, and they’re ready to go. Although the Presbytery of the Southwest will have a regional home missionary in place later this year, they don’t want to wait. “We’ve had a desire to do this for some time,” says York.

“I neglected the idea of church planting for years, but when the Lord threw me into the effort to plant Cornerstone, I caught the church planting bug,” said York. He no longer wonders if a new church plant would take people away from Providence.

The Lord blessed Cornerstone with a faithful core group, even before Arendale arrived. The building up of Cornerstone was an encouragement to the congregation of Providence. Both congregations are stable, but the loss of a few families would put either on the edge of instability. After seeing what happened as Cornerstone grew, York says that planting churches is one way to build up your own congregation, though that is not his purpose in seeking to plant more churches in Houston.

It’s easy to slip into complacency, York said, adding that it’s tempting to think, “we should wait until we are more firmly established.” He is convinced that now is the time to move forward. “This isn’t something we should be complacent about. Churches should be planting churches.”

Arendale does not consider himself a church planter. “I’m a pastor,” he said. “On the one hand, it takes time and effort, but on the other hand, it isn’t hard. Anyone can do this.” York and Arendale seek to be faithful in planting seeds, and trust God to water them and bring growth. Pray that their zeal to see churches planted will continue as the everyday tasks of pastoring their own congregations take priority.

“Houston may have a church on every corner,” says Arendale, but not every one is solid. There is not a long history of Reformed churches in Houston. Not everyone knows what a Presbyterian is, let along an Orthodox Presbyterian. This brings both opportunities and challenges. Some have come to Cornerstone and Providence simply looking for biblical faithfulness, only later realizing that they’d found such faithfulness in the Reformed faith. Others are seeking something that Houston’s many mega churches can’t offer – a place where their pastor knows them, and where they will be shepherded.

In addition to the Bible study, York and Arendale plan to hold a few informational meetings throughout the summer. Pray that God will raise up a solid core group in Clearlake. Pray too, for wisdom in deciding how to reach out to the community.

The new effort does not yet have its own web page, but you can find more information by checking out the Facebook page https://www.facebook.com/shreformed. If you know people who might be interested in the Bible study and/or worship services please send them to this link, or have them email york.1@opc.org or arendale.1@opc.org.