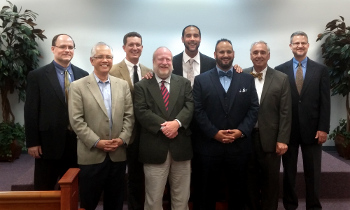 Redeemer OPC in Birmingham, Ala. called Mark Soud as their first full-time pastor in 15 years. Carl Russell, already once retired, served the congregation as a part-time pastor until his retirement from Redeemer in February 2014.

The congregation first asked Mark to serve as pulpit supply. He had recently finished a yearlong internship in Phoenix. When he began on June 1, 2014, he worked Monday and Friday at a bank, and spent the rest of his time writing sermons for morning and evening worship, and preparing for Sunday school. Mark was ordained and installed on May 15. Now working full time as a pastor, he is looking forward to spending time on outreach and evangelism.

When Mark arrived, Redeemer had about ten members and an average attendance of about thirty people. Many of the regular attenders have since joined the congregation, and now attendance at morning worship is about 35. Folks have recently moved to the area from Indiana and Florida, and an e-mail from Frode Jensen informed Mark that a couple from Oregon were moving to Birmingham. In fact as he wrote, they were on the bus.

"The ship is floating", Mark said. "There is excitement on the ground." He recently finished a Sunday school class on evangelism. The congregation is already active in engaging those around them with the gospel. They are currently planning gatherings to encourage fellowship within the congregation, and provide opportunities to introduce friends and neighbors to the church.

The congregation is looking for a new location that will be both more affordable and more visible. Pray that the Lord will bless them with such a space.

Orthodox Presbyterian Church, Chambersburg held its first worship service in April 2014, but the effort to plant a church in Chambersburg began long before that. Rev. John Mallin and Mr. Tim Shatzer, who serve on the session of Living Hope OPC in Gettysburg, PA, and live in Chambersburg had long hoped for an OP congregation in their town, and led Bible studies with a goal that a congregation would be planted there.

Toward the end of 2013, the decision was made to move from weekly Bible studies to holding morning worship each Lord's Day. Josh McKamy an intern at New Life OPC in Williamsport, PA began serving the work in Chambersburg as worship services were first held in April 2014. About 15 people gathered for worship in a basement room of a local hotel each week during that first month.

Living Hope hired Josh in July 2014 to serve as the church planter in Chambersburg, and he was ordained and installed in January. He grew up in an Evangelical Free church in Colorado, but walked away from the church. An elder from Redeemer OPC in Danville, PA who was doing evangelistic work on the campus of nearby Bucknell University met Josh when was a student there. It was through the Redeemer church that God saved Josh. "Becoming a Christian in a church plant, OP church planting was always on my heart and the Lord provided an opportunity" said McKamy.

The group has seen slow, steady growth over the last year. They now meet in the hotel's main conference room. A new family and two single men recently joined the congregation. Over the last six months, all the regular attenders have become members, and, McKamy says everyone has increased their commitment to the work.

The group has done some outreach, and has spent the last six months discussing evangelism and how they can do it well. "Now," says McKamy, "is the time to push ahead with evangelism." Plans are being laid to go through the Christianity Explored curriculum this fall. Pray that details will be worked out, and that the Lord will use this effort to bring people to himself.

Gateway OPC, St. Louis, Mo. has been without a pastor since Todd Wagenmaker took a call to Covenant Presbyterian Church in Ft. Worth, Texas earlier this year. God has blessed the congregation in the transition to a new pastor. Paul Mourreale and his family arrived in St. Louis to serve as the church planter.

Jim Bosgraf, Presbytery of the Midwest's RHM, quickly got to work helping the congregation find a new pastor. He scheduled breakfast with Paul Mourreale on a Saturday morning in Green Bay, Wis. where he served as the associate pastor of New Hope OPC. By Monday, the folks in St. Louis were interviewing him over the phone.

The Mourreales' house in Green Bay sold in three days, enabling them to purchase their new home in St. Louis even though someone else offered more money. The congregation in Green Bay has been encouraging to the Mourreale family. Ruling Elder Roger Huibregtse even made a pulpit for Gateway. Paul preached from it his last Sunday in Wisconsin, and friends will soon deliver it to St. Louis. Pray that the family will quickly settle into their new home and neighborhood.

Thirty-seven people gathered for worship at Gateway OPC last Sunday, as Mourreale began his work there. One of the families was from Covenant Family OPC in Troy, Miss. A bond has grown between the two congregations, and there are often visitors from Troy. Pray for the congregation as they reach out to their culturally and religiously diverse community.