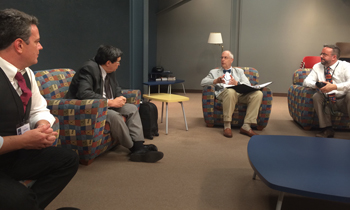 A Spring and Summer of CEIR Service

"Amongst the greatest evils of our century must be counted the fact that the churches are so divided one from another that there is scarcely even a human relationship between us; at all events there is not the shining light of that holy fellowship of the members of Christ, of which many boast in word, but which few seek sincerely indeed. In consequence, because the members are torn apart, the body of the church lies wounded and bleeding. So far as I have it in my power, if I am thought to be of any service, I shall not be afraid to cross ten seas for this purpose, if that should be necessary." John Calvin writing to Thomas Cranmer, the Arch-bishop of Canterbury, 1552.

In the spirit of John Calvin, if not with his eloquent prose, the OPC Committee on Ecumenicity and Interchurch Relations, as mandated by the General Assembly*, seeks sincerely to cultivate that holy fellowship of the members of Christ about which Calvin was so concerned that he feared not to cross ten seas.

While the committee has annual meetings with other churches, convened in the North American Presbyterian and Reformed Council, and itself meets twice a year to conduct business in the Spring and Fall, its work shifts into high gear in the Spring and Summer. In its March meeting, fraternal delegates are typically appointed to attend numerous Synods and Assemblies where we have been invited. The committee appoints its members to function as liaisons with individual sister churches, and usually these liaisons are sent to represent the OPC. They are careful to speak for the whole church and try not to voice individual opinions, unless asked to do so by the host church.

The Ecumenical season began in earnest with Mark Bube and Tony Curto attending the Synod of the Evangelical Reformed Church, Westminster Confession which met in Vienna, Austria. The Synod provides the OPC ministry access in German speaking Europe, and invited Dr. Curto to labor amongst them in the Summer of 2015.

Everett Henes was sent to the Synod of the Heritage Reformed Congregations as they met in Grand Rapids, MI. He reports they are actively involved in training ministers of the Gospel at Puritan Reformed Theological Seminary.

Iain Wright visited with our Free Reformed Church of North America brethren as their Synod convened in Ontario. The FRCNA and the HRC are actively discussing union between their current federations.

Charles Muether was warmly received at the 269th Synod of the Reformed Church of the United States which met in May in Menno, South Dakota. The Synod expressed the commendable desire for OPC Presbyteries to send fraternal delegates to RCUS classis meetings within their bounds, when invited.

Chad Van Dixhoorn was our representative at the PCA General Assembly in Chattanooga where he enjoyed warm fellowship, was invited to observe all facets of the Assembly at work and reports that, "discussions of various overtures tended to be thoughtful and consistently addressed key issues." Jack Sawyer attended the ARP and RPCNA Synods which met concurrently at the Bonclarken Conference Center in Flat Rock, NC. In August, he attended the Bible Presbyterian Synod at Grace BPC in Cape Canaveral, Florida.

These visits, while pleasant in the cultivation and enjoyment of Christian fellowship, are not holiday junkets. They are concentrated efforts to initiate shared ministry, while maintaining and deepening our fellowship with these churches.

These visitors and their ecumenical greetings in behalf of their own sending churches, constitute a window on the wider church world, and have become an important highlight of the assembly week and its work. Enrolled as corresponding members of the assembly and given the privilege of the floor, they are also invited to advisory committee meetings, and shown hospitality through the provision of room and board. This year saw an added feature in the provision of an private lounge for fraternal delegates where they could find some peace and quiet with a cold drink or coffee, in a comfortable chair, use the internet, or call home. The room was located upstairs in the B.J. Haan Center at Dordt College and was also used by the CEIR members at the assembly for private consultations with the different delegates.

On Saturday, after the evening recess and a wonderful dinner provided by the College, the annual Ecumenical Colloquium was held in the Eckardt Lounge of the Student Center. This has also become an annual feature of the assembly. The colloquium, or friendly discussion, is a free flowing forum where the delegates can share what is going on in their churches, theological issues or ministry opportunities. The discussion was also opened to the OPC Commissioners, and a lively interchange of ideas and information followed.

Three significant recommendations were proposed by the CEIR to the 82nd Assembly:

1) To write to the 2015 Reformed Church of Japan General Assembly and plead with our brothers to repeal the action taken in 2014 which set in motion the opening of all ecclesiastical offices to women. Along with the lengthy letter of appeal to the RCJ, a procedure was also proposed and adopted for the termination of our longstanding relationship of Ecclesiastical Fellowship if they proceed to confirm and implement the 2014 decision.

2) The acceptance of an invitation by the Presbyterian Church of the Reformation in Columbia to enter into Corresponding Relations. This church has for some years been the focus of work by Rev. Douglas Clawson and our Committee on Foreign Missions, and has happily progressed to a level of ecclesiastical maturity where such a relationship now becomes mutually beneficial. The Assembly approved this recommendation. 3) The CEIR recommended that the offer of full Ecclesiastical Fellowship by the Presbyterian Church of Brazil to the OPC be approved, and the assembly heartily concurred. The PCB, or IPB in Portuguese, was founded over 150 years ago by a missionary trained under Charles Hodge at Princeton Seminary. In 1983 the IPB broke its longstanding ties with the PCUSA over the increasing apostasy in that body and began searching for what they thought to be the legitimate continuation of their mother church. One of the branches of that continuation was found in the OPC. Over the past decade the Brazilians have regularly attended OPC Assemblies, urged the CEIR to send representatives to their meetings, and even entered into a co-operative mission agreement with the CFM. Dr. Davi Gomes, and Elder Solano Portela of the IPB Ecumenicity Committee were in attendance and openly rejoiced with the Assembly after the vote was taken.

More work this year remains for the CEIR in the Fall of 2015, with concern over the RCJ assembly in October, the Committee's meeting in Willow Grove in early November, followed by the meeting of NAPARC in Quebec City. But that is the subject of another report. For now, hopefully, a glimpse is given into the efforts made by the CEIR to serve the General Assembly and the entirety of the OPC in the pursuit of that united, holy fellowship of the churches of Christ which was so precious to John Calvin. In this, one hopes the OPC continues to show herself to be a humble but true promoter of his eloquent, ecumenical ideal.

** See http://opc.org/relations/rules.pdf for the rules governing delegates, representatives, and observers, and the technical distinctions between them.