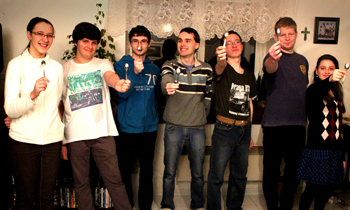 People do not often think of Europe as a mission field. I know I did not. But after a summer mission trip in 2010, after seeing first-hand the devastating effects of living without Christ, after witnessing the lives of the Lost, I began to see that Europe has a serious need for the gospel. After serving in Prague for two years as a missionary associate, I have a much better understanding for how badly Czechs are in need of the Gospel.

The Czech Republic is one of the most atheist nations in the world. Years of an overbearing Catholic church melted into a culture of old church ceremony and pagan traditions. All of it, of course, is completely empty practice. Folklore. Communism washed away most of the nominal church-goers, and its after-effects include a plaguing sense of distrust of strangers and a general sense of highly prized self-dependence, establishing several generations of ardent atheists. Pealing away these layers of cultural mindset is a huge part of the mission work in Prague and it is done through slow, methodical, sincere steps towards friendship with the community around the church plant. Through English lessons, youth programs, summer camps, holiday outreaches and a myriad of one-on-one meet-ups, the church in Prague has been working to develop a core community with whom to evangelize.

As a missionary associate, I was heavily involved in the youth programs. This included a weekly gathering with high school and college students, and a monthly program for junior high girls. Teaching at an elementary school took up most of my daily work hours and provided the most opportunities to reach out to people. Both students and teachers asked me about why I came to Prague and what I believe about God. From praying over my lunch, to demonstrating the act of asking for and granting forgiveness, the goal remained simple: live a life that is set apart. This created essential structural support to the conversations about God, faith, or morality held during afternoon English clubs or classroom discussion time. It served to build a visible foundation for what a life looks like when it has been changed by grace. A lifestyle like that stands out in contrast to how Czechs, and the Lost all over the world, have been living.

Through God's great mercy, several of my students began attending church and youth group and one expressed interest in becoming a Christian. I also met up individually with a number of young women several times a month. Developing friendships with these Czech girls was a blessing in itself, but I was humbled more by God's continual opening doors for me to share my faith.

God's faithfulness in this field is astounding and Prague is certainly a field ripe for harvest!

Prayers are needed, as are additional hands. Pray for the softening of hearts in Prague and around the country. Pray for the spiritual growth of those who have made a profession of faith and are now facing a culture which will reject them and families who do not understand their new walk. Pray for conviction in the minds of those who are wrestling with a pseudo-intellectual hold that culture has over many Czechs, feeding them evolution and atheism from a very young age. Pray for strength, encouragement, wisdom, and boldness for those who are continuing the work in this mission field.

In some ways, Prague still doesn't seem like a mission field when it is compared to countries where Christianity is a death sentence or where the standard of living is so far beneath what we are used to in the United States. However, that mindset is dangerous, because it breeds the idea that our own home is also not a mission field. There is one thing that Czechs and Americans have in common, and that is that most have no true understanding of who God is, what our sin looks like before Him, and how it feels to be saved by His incredible, ineffable free gift of grace.