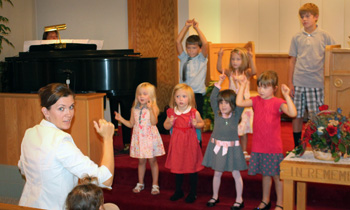 Members and friends of the Orthodox Presbyterian Church for the last two years have given to the Thank Offering far beyond what was even asked. By doing so, they helped the OPC to almost completely fund our denomination's annual budget, called World Wide Outreach (WWO).

This month, the OPC is once again asking for such generous giving to the 2015 Thank Offering. Our denomination hopes that this year's Thank Offering will exceed one million dollars. While that appears to be a hefty sum, the folks in our pews have given more than that amount for the last two years to help fund the work of our committees of Home Missions, Foreign Missions, and Christian Education.

"Historically the Thank Offering has been a great opportunity for OPC individuals to directly respond to the needs and challenges of supporting the programs of World Wide Outreach," said David Haney, director of finance and planned giving. "More than one million dollars came in for the 2014 Thank Offering and the same was true in 2013."

Each congregation budgets how much of its weekly tithes and offerings are sent to the OPC offices to help fund about three-quarters of the work of the OPC's Home Missions, Foreign Missions, and Christian Education. The remaining quarter of the WWO budget is financed by one hundred percent of the contributions that people in the pews specifically designate for the Thank Offering. When giving is generous, as in the last two years, the extra funds help the committees to continue their service to Christ without using their reserves or cutting programs or personnel to make up for budget shortfalls.

This year's OPC General Assembly approved a $4.08 million budget for 2016. Currently giving to the OPC that comes through each church's budget has fallen behind by more than $225,000, or nearly 10 percent of the budget.

"If the Thank Offering is in excess of one million dollars, it will help close that gap very quickly," said Haney. "Perhaps we have underestimated the capacity of God's people to respond to the challenge with thankful hearts."

The generosity of last year's Thank Offering enabled the Committee on Home Missions and Church Extension to support thirty-eight church plants and eight regional home missionaries (RHMs), including a new RHM for the Presbytery of the Southwest, and another RHM who will start this December. Home Missions also was able to help a church support a yearlong intern.

If this year's Thank Offering is as bountiful, Home Missions hopes in 2016 to support at least eight new church plants with new church planters in places such as Yuma, Arizona; Winston-Salem, North Carolina; Virginia Beach, Virginia; Huron, Ohio; and Coeur d'Alene, Idaho. "Groups in other cities also are hoping to secure a church planter and one or two other presbyteries would like to call an RHM," said John Shaw, general secretary of Home Missions.

Last year's overflowing Thank Offering also helped Home Missions "to meet their budget without drastically reducing their reserves—which provide a necessary buffer for our ongoing support of the work of church planting throughout the OPC," said Shaw.

"After waiting for more than a year to send a second missionary family to join the Tuiningas in Uganda, the Committee on Foreign Missions knew the time was finally right this year to send the Charles Jackson family there because of last year's generous Thank Offering," said Douglas Clawson, associate general secretary of the Committee on Foreign Missions.

If this year's Thank Offering is equally liberal, the top priority of Foreign Missions is to place two additional missionaries to work alongside our two missionaries in an Asian nation, said Clawson. Each new missionary would be paired with a current missionary. One pair would focus on planting additional churches in the northeast and the other pair would focus their efforts on assisting the work in the west.

"It is His work in His time and to His glory," said Clawson. "With those overflowing blessings, at a time when finances are difficult for almost everyone in the church, He enables us to be overflowing in our giving to support His work."

Last year's generosity enabled the Committee on Christian Education to finance all of the churches' requests for pastoral interns. "We were able to carry on all the ministries we had planned," said Danny Olinger, general secretary of Christian Education. "We also were greatly encouraged by the record participation in the Ministerial Training in the OPC (MTIOPC) courses."

With abundant giving this year, "we're hopeful to meet the requests of churches in requesting an intern," said Olinger.

This generous giving on the part of those in the pews shows the connectivity our churches have for each other. "We have in this church the outward looking focus that we pray for one another, encourage one another, and seek to support one another," said Olinger. "The giving is one way we're able to do this."

The Thank Offering shows that the OPC doesn't proceed on our own strength. "We look to the Lord and acknowledge that we're depending upon Him and He blesses us abundantly," said Olinger. "By the gifts of Jesus Christ and His work on the cross, we seek to give back to Him in the work of his kingdom."