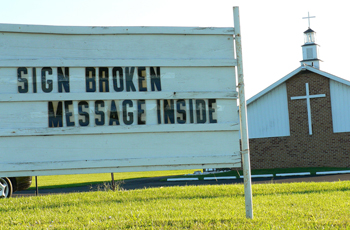 Visually Engaging the Lost in Your Town

What does your church’s website communicate to the average person? Is it accessible not only to folks already convinced of reformed teaching, but also the under-churched or unchurched person who is searching for answers? Former church planter Brad Hertzog says having a website was good enough in 2005, but not today. Research shows that we have 10-15 seconds to capture the attention of someone visiting our websites.

Over the last several years CHMCE General Secretary John Shaw has been wrestling with how we can make ourselves more accessible to those outside our circles – without compromising our theology. He saw more websites with video content and wanted to see what OP church plants could do to use video to reach out to new people.

While Brad Hertzog was serving as the church planter of Reformation OPC in Queens, NY, he developed an interest in communication, and he added videos to Reformation’s website. After moving on from his position in Queens, Brad started his own company. "I wanted to help people tell their stories better with technology," Brad said. "But I didn't know it would lead to this." He was happy to be able to use both his experience as a church planter, and his knowledge of effective communication to help OP church plants reach new people in their communities.

John had lunch with Brad to learn more about how we could make church plants' websites more accessible to their communities. Video was one of Brad's suggestions, but it can be costly to have a video produced for each church plant, so a plan was made to have Brad attend the Church Planter Training Conference in January 2015 and work with several church planters at once.

When asked why it wasn't enough to have one video that each church plant could use, Brad explained that the videos aren't aimed at people looking for the local OPC, but to introduce the church plant to the people in its community.

"Pastors need time to put themselves in the shoes (and heart and mind) of the people they're trying to reach," Brad said. They need to know what the unchurched think and feel about sports, music, what they are watching– really get dialed in to the audience and then reach out to them." After studying the community, the pastor should be able to clearly describe life in the town – the loves, the fears, the concerns of the people living there.

This is an area Brad feels the OPC can improve in. He encourages pastors to see who in their community is doing it well, and figure out what it is they’re doing. "We have the purest form of the gospel," he says, "and we need to reach people with it."

When working with the church planters, he explained that OP transplants to their towns were not the audience for the video. Someone with a Reformed background will know what you're about after spending 10 seconds on your website. Rather, the audience is your unbelieving neighbor. Someone who won't understand - possibly won't even read – an "About Us" or "What We Believe" page on your website. Those pages excite us and will be an oasis in the desert for someone who's just started reading RC Sproul, but won't mean much to anyone else…and rightly so. Will we go further to engage all the others?

Brad likens the videos to meeting someone for the first time. We don't normally begin telling someone new everything about ourselves. Or…at least we shouldn't. We seek to get to know them. We ask questions like what do you do for a living? Where do you live?

We should create websites and videos that not only explain who we are and what we believe, but also engage the world of those we hope to reach. If we long to see our congregations and church plants reach all sorts of people with the gospel – and not simply those who are already convinced of Reformed theology – than we need to understand how people think, and then speak to them about the gospel in language they understand. With this video project, we hope to more effectively reach people from many backgrounds.

A second round of church planters is going through the video production process now, and many have commented that the exercise has helped them to think about who exactly it is that they are trying to reach with the gospel.

A video for your church's website doesn’t have to be shot in a studio. In fact, you don't need much more than a good smartphone to capture a quality image.

The key is to step back for a moment and consider your audience and what you are trying to do with the video. Who do you want to reach? And what will it take to do that? Will you study your community, think about how you can get to know your neighbors, and learn how to communicate the gospel clearly to them? This project is helping the committee and the church planters think more about these things, and we hope it might help and challenge all of us improve in thinking about how to reach the lost in our own cities and towns.