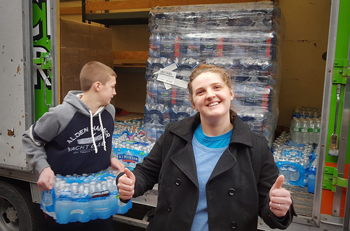 The city of Flint, Michigan, has been much in the news lately due to the crisis brought about by the contamination of their drinking water. This situation has particularly impacted the poor, the weak, and the elderly – those with difficulty procuring and transporting all of the water needed for drinking and cooking. The deacons at one OP church in Michigan saw this as a wonderful opportunity to show the love of Christ in a very tangible way, and rallied their presbytery to action.

On a Sunday in January, the deacons at Oakland Hills OPC in Farmington Hills, Michigan, announced to the congregation that they were coordinating a water distribution effort in Flint and asked for prayer, donations of water, and volunteers to drive trucks and/or go door to door handing out bottled water.

Several deacons from the Presbytery of Michigan and Ontario visited Flint to assess the situation, and arranged to partner with Prince of Peace Missionary Baptist Church (POPMBC) in downtown Flint to distribute water to those in need such as the elderly who have no transportation, and families with young children; to God’s people, as well as to those who do not know him. OPC deacon Douglas Vos reported that Pastor Hawkins of POPMBC was “very excited about doing evangelism and telling people about the ‘living water’ that only Jesus can provide.”

On Saturday, February 20th, approximately 12 people from Oakland Hills, and nearly 20 people from New City Fellowship OPC in Grand Rapids, met up at POPMBC and spent two hours talking with the pastor and elders about the crisis (which may not be fully resolved for two more years), and another four hours distributing about 2.5 tons of water along with 250-300 Christian books, booklets, and tracts.

Pastor Mika Edmondson of New City Fellowship reported, “The residents of Flint were extremely gracious, hospitable, and thankful for the support we offered. Generally, they were open to hearing the good news of Christ and to pray with us as we went door to door.”

Deacon Douglas Vos of Oakland Hills summed it up: “There you have it. Orthodoxy and orthopraxy. Preaching the good news and doing works of mercy. Hearts and hands. Adults and children. Loving God and loving our neighbor. Giving a cup of cold, clear water in Jesus’ name.”