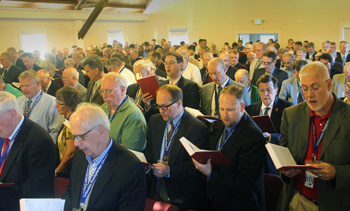 The OPC and the URCNA have adopted a joint songbook, the Trinity Psalter Hymnal. This historic event occurred recently at the OPC GA (held at the Sandy Cove Christian Conference Center in North East, Maryland) and the URCNA Synod (held at Bethany URC, Wyoming, Michigan). Referring to this as historic puts me in mind of the great OPC churchman of yesteryear, Prof. Robert Knudsen, who first introduced me to the distinction between “historical” and “historic” from the writings of Herman Dooyeweerd. All actions of assemblies, entered as they are in the minutes, are historical. Few are truly historic. This is the first time to my knowledge in which churches of the confessional Presbyterian tradition and the confessional Reformed tradition have worked together in producing this sort of cooperative ecumenical product.

This joint action of the OPC and of our dear brothers in the United Reformed Churches of North America (many of which came out of the CRCNA in 1995 and held their first synod in 1996) is historic because of its ecumenical significance (this is walking the walk, not just talking the talk) and also because, for the OPC, we have always been a sort of confluence of Scottish/American Presbyterianism and Continental (and especially Dutch) Reformed. Hence the appropriateness of citing Bob Knudsen, who taught at Westminster and received his Ph.D. from the Free University of Amsterdam. He, along with his senior, Cornelius Van Til, Ned Stonehouse, R.B. Kuiper, and others, represent the best of something that has culminated in this historic, cooperative ecumenical achievement.

The Trinity Psalter Hymnal contains in its first section a setting of all 150 Psalms (with more significant psalms receiving more than one setting and with separate settings for each of the sections of Psalm 119). We have sought to capture the Psalms accurately and in the vernacular, taking particular care to match the affect of the Psalms with properly congruent tunes. The second section features more than 400 hymns ancient and modern, including a number of more recent compositions. One unprecedented feature of this historic book of which we are especially grateful is that it will be a single book containing, in addition to the psalms and hymns noted earlier, all the Reformed and Presbyterian Confessions and Creeds: The Belgic Confession (1561), the Heidelberg Catechism (1563), the Canons of Dordt (1619), along with the Westminster Confession of Faith and Catechisms (Larger and Shorter).

Such a book, containing no denomination or federation specific documents, will represent Reformed ecumenism at its best and we hope that it will be used to draw confessional Presbyterian and Reformed communions worldwide closer together. In these days of societal decay and the pervasive embrace of worldviews antithetical to the Christian faith, what could be more needed? We would affirm that nothing is more needed than all faithful churches calling the world to its only and true hope: the worship and praise of our Triune God, focused particularly on the person and work of Christ, the only Redeemer of humanity and the only one who has done for us what we could never do for ourselves. All praise to our great and gracious God! That is just what the Trinity Psalter Hymnal seeks to promote. AMDG (Ad maiorem Dei gloriam)!