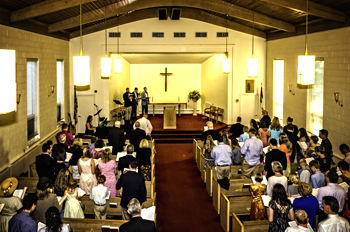 The mission work in Virginia Beach, Virginia, now known as Reformation Presbyterian Church began with prayer. Regional home missionaries Steve Doe and Lacy Andrews had already been praying for an open door to Gospel witness in the Tidewater region.

The late Rev. Bryan Weaver and his wife were instrumental in these early days of a small Bible study that began in 2012. Regional home missionaries Steve Doe and Lacy Andrews became deeply involved in the work as it became Reformation Presbyterian Church and was received as a mission work of the Presbytery of the Southeast in 2013.

Both Lacy and Steve were in Virginia Beach regularly, and in early 2014, Reformation Presbyterian Church, now meeting weekly for morning and evening worship, was ready to call a minister – or at least ready to search for one. Little did they know that it would be nearly two years before they found their man.

While Reformation Presbyterian Church was searching for an organizing pastor, Lowell Ivey was attending Greenville Presbyterian Theological Seminary, and completing a year-long internship at Covenant Community Church (OPC) in Taylors, South Carolina. He and his wife, Mae, had moved to South Carolina from Texas after meeting at Christ the King OPC in Longview, Texas. Lowell was converted in prison, while serving over 15 years on a 17-year sentence for a robbery he committed when he was 19. One night, while listening to a radio program called, "Here Comes the Light," God shined the glorious light of the Gospel into Lowell's heart and set him free in Jesus Christ. "I always say I was Reformed before I knew anything about the Five Solas or the Five Points of Calvinism," says Lowell. "I just knew one thing: the Lord changed my heart and graciously enabled me to repent of my sin and believe in Christ." 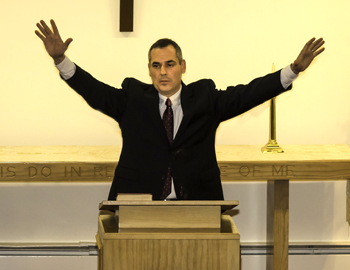 Lowell graduated from seminary in May, 2015, and had spoken with Lacy Andrews about the Virginia Beach mission work. After talking to his session, it was agreed that he would be better prepared for ministry if he remained in Greenville to serve an internship under Pastor Peter VanDoodewaard.  In God's infinite wisdom, when he finished the internship, the session and Pulpit Search Committee of Reformation Presbyterian Church were still looking for an organizing pastor. In February 2016, Lowell spent ten days getting to know the congregation and preaching for them on two consecutive Lord's Days. The following Sunday, the congregation voted unanimously to ask the Presbytery of the Southeast to call Lowell as its evangelist. Lowell was ordained and installed as Reformation Presbyterian Church's organizing pastor on May 27 (which also happens to be his birthday!). Lowell and Mae arrived on the field with their two children, Geneva and Titus, in mid-May. Waiting for them on their front porch was a gift basket from the congregation. The next day, several families helped the Iveys unload a U-Haul truck and get settled into their new home. The congregation had a fellowship cookout that evening at a park adjacent to the Iveys' home. The Ivey family has been enjoying getting to know the congregation, which has opened its arms wide to welcome them and make them feel at home.

In order to know the people better, and more effectively shepherd them, Lowell has begun a schedule of regular family visitation. At this point, sermon preparation and shepherding the congregation takes the bulk of Lowell's time, but he hopes to begin outreach and evangelism activities in late summer and early fall. "The Tidewater area has a lot of churches, but few of them are Reformed," says Lowell. "Only around one percent of the Christian community is Reformed. And even with so many churches, almost sixty five percent of people here claim no religious affiliation at all. The harvest is white in every direction, as far as the eye can see!"

The Iveys have begun hosting a weekly prayer meeting in their home on Wednesday evenings. "Corporate prayer is essential to what we do," says Lowell. "It's the heartbeat of the church. It's so easy for us to forget that corporate prayer is a means of grace. If we really believe that, and if we really want to see the church grow, we’ll give ourselves to fervent and effectual prayer." Pray with the congregation that the Lord will bless Lowell's ministry to the saints in Virginia Beach and add to their numbers.

Close to 50 people currently gather for worship each week. Several families recently joined the work, and several other families have begun attending. The morning worship location is getting too small for the group, and they meet at a separate location for evening worship. Pray that the Lord will provide a more suitable location that will be available to the group for the entire Lord's Day.

Pray for wisdom as the congregation considers how best to reach out to their neighbors this summer, and in the years to come.