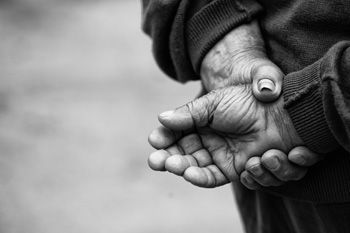 Going to heaven. Is that something folks achieve one way or the other, the only question being how?

Anyone holding that view must face two rather significant problems. First, it just doesn't work that way. The person who asks, "What do I have to do to become a Christian?" does enjoy a clear biblical precedent—remember the Philippian jailer (Acts 16:30)—but that kind of humble candor is not always in evidence. There are also those questioners who take the rich young ruler (Matt. 19:16) as their model. They, too, will go away sad (vs. 22). You see, heaven is not a reward for being one of "the goodies."

A second problem is this: there are those who "go for it" anyway. But when they do, they find no confidence that their ultimate destiny will indeed be the celestial kingdom. That's because there's nothing in the Bible offering them such assurance, no witness of the Holy Spirit with their spirits, and no fruit in their lives evidencing God's work within them.

The First and the Last

Jesus faced the same kind of thinking in the days of his flesh—not only from the crowd, but even from his disciples! However, the true King showed, and still shows, that his subjects are not people who get what they deserve. His kingdom is a kingdom of grace! Although some will insist, "We've done the right things—we're first in line," they will discover to their dismay that "many who are first will be last." And others, who bemoan their sins and cry out for mercy, will find with joy that "many who are last will be first."

We need to consider that prophecy carefully. Jesus announced it twice—in Matthew 19:30 and 20:16. Between those two announcements he told a story that we might call "The Parable of the Late Afternoon Workers" (20:1-15). It is a powerful sermon illustration, showing how it is that many who are first will be last, and that many who are last will be first.

To understand this rather enigmatic statement, we need to note what it was that prompted Jesus' words. It was Peter's question, "We have left everything to follow you! What then will there be for us?" (19:27). Now those were amazing words, given their context (vss. 16-26)! Jesus had just finished his dialogue with the rich young man and heard his disciples wondering whether anyone could be saved. He explained that salvation is indeed impossible for people to achieve on their own, but that God could do it for them (vs. 26).

There is a popular notion that salvation is conditional—that it depends on whether or not the person has been good enough or has accomplished the necessary work. If so, then "just desserts" may be expected. But Jesus taught that the truth lies in the opposite direction: salvation is unconditional. It depends solely upon the grace of God. That is, it is a free, unearned, and unmerited gift.

Now his point could easily be lost on us. We need to pay attention, therefore, to his illustrative parable. It provides a "window" into Jesus' mysterious words, "So the last will be first, and the first will be last."

One morning at 6:00 a.m., Jesus related, a certain landowner hired men to work in his vineyard. He negotiated a wage package for them, settling on a fixed amount of pay for the day's work: one denarius, a typical day's wage—let's call it $100. At 9:00 a.m., noticing some men "standing in the marketplace doing nothing," the landowner hired them also, promising to pay them "whatever is right." (Incidentally, this writer has been told that even today in such African countries as Uganda, workers typically stand around in their own special section of the marketplace, tools in hand, waiting for someone to hire them for the day.) Furthermore, at noon and again at 3:00 p.m., he took on yet more help, on the same terms. Not finished, he hired still others, who had been idle all day, at 5:00 p.m. But this time, he made them no promise of compensation.

At quitting time (6:00 p.m.), the landowner instructed his foreman to pay the workers, "beginning with the last ones hired and going on to the first" (20:8). Guess what happened. The men who had worked for only one hour still got the full $100! Naturally, then, the men who worked for twelve hours expected to be paid considerably more. But, lo and behold, they each got exactly $100, too, no matter how long they had worked.

Truly vexed, they entered a labor grievance, only to be reminded that they had been paid precisely according to their contract, and were sent home with this unassailable explanation ringing in their ears: "I want to give the man who was hired last the same as I gave you. Don't I have the right to do what I want with my own money? Or are you envious because I am generous?" (vss. 14-15).

The First, Who Will Be Last, Believe That Salvation Is by Works

The parable isn't showing that some people are saved late in life (that is true enough, but it's not the point). And it isn't saying that Gentiles rather than Jews are to be saved (not true). It's not even saying that everybody works, and only some (capriciously) are rewarded for their works (also not true). What Jesus' parable does reveal is that all kingdom blessing is of grace. So, anyone who believes that it is of merit, on their part, will be disappointed.

We must always be careful to treat a parable properly. It is a sermon illustration, meant to bring light to those who are willing to listen to Jesus. It's not an allegory, meant to picture all sorts of truths. In the case of this parable, the attitudes of the workers toward the action of the landowner provide insight into two opposite attitudes toward salvation, namely, whether it is a matter of just desserts or of grace.

The fruit of the first attitude (just desserts) will be dissatisfaction and complaining, when others whom they believe have not produced enough are blessed anyway! Do you remember Job's three friends—Eliphaz, Bildad, and Zophar? They shared a common explanation for Job's woes: he was receiving his just desserts, and there was nothing for him to do but repent. A fourth, Elihu, had a different spin on the situation: absolute righteousness and justice belong to God, so you'll simply have to trust him, Job. This last counselor came very close to the truth, but not even his words brought Job peace. That came only with God's word: "Will the one who contends with the Almighty correct him?" (Job 40:2).

The Last, Who Will Be First, Believe That Salvation Is by Grace

Notice that, in the parable, the late afternoon workers give as the reason for their daylong idleness, "No one has hired us" (vs. 7). They were not yet aboard; they had not been in the sphere of blessing; they had been left out! They were quite aware of their lack of "works." They had produced nothing worthy of payment.

Now, those who were hired between 9:00 a.m. and 3:00 p.m. were promised to be paid whatever was right. That's only one step removed from "just desserts"! But those really late afternoon workers (the 5:00 p.m. men) were told nothing about wages. They signed no contract between equals. They were told merely to come, be on the labor force, and work. So they labored happily, and at the end of the day they received gracious and generous blessings. What they did was not commensurate with what they received. There was no relationship whatever between their work and their reward. As far as they were concerned, their blessedness was entirely attributable to the kindness of their employer.

The first, who will be last, saw the whole event at best as a crying shame and at worst as a gross injustice. But the last, who will be first, look upon the whole event as wonderful. Thus, perhaps the chief mark of saving faith is contentment. It is no wonder that worry and dissatisfaction are soundly condemned by the New Testament!

Now, let's try to understand the place of works in salvation. Imagine a small child bringing to her father a "picture she has drawn of him," which, for all the world, looks like a sweet potato with toothpicks stuck into it! You know that he will say to her, "Thank you, sweetheart, for making such a beautiful picture of Daddy!" Her effort is evaluated and accepted by a criterion other than that of artistic excellence. This is his daughter, who loves him and wants to make him happy. Her work doesn't qualify her to be his daughter; rather, her status as his daughter makes her work acceptable to him.

Jesus, thy blood and righteousness
My beauty are, my glorious dress.

There is a Covenant of Works. There is nothing unworthy, or unrighteous, about getting what one deserves. After all, God said to Adam: "Obey and you will live." That Covenant of Works was broken by Adam, and since he represented the whole human race (cf. Rom. 5:12-19), all men came under condemnation as a result of his fall. But that covenant was kept by the Second Adam, Jesus Christ! "Just desserts" are gained, yes—but not by us. By Jesus! Believers participate, entirely by grace, in the blessing achieved by him.

Believers give evidence of their participation in the salvation earned by Jesus in two ways. First, they reject any notion whatever of receiving wages for their work. Christians need to get every remnant of this mentality out of their thinking, because it's insidious; every fiber of their "old man" wants to retain it! Peter wanted to retain it, but Jesus loved him and took pains to wash it out of his thinking.

Second, believers bring forth works of thankfulness to God for his deliverance, by his grace and Spirit. This is the reason why the Heidelberg Catechism places its treatment of the Ten Commandments under the heading of "Gratitude."

Here alone is there comfort and assurance of salvation: that the last shall be first. Believers are "the last" because they can make no claim whatever upon God to give them anything. And they shall be "first" in the sense that through faith in Christ, entirely as a result of God's unmerited grace, they will partake of every spiritual blessing!

Jesus' parables hid the truth from the self-righteous, so that "seeing they would not see, and hearing they would not hear." People who desire to subject God to the canons of human reason will see the early morning workers as having a point. They will not see the point being made by Jesus, however, and they will go away from his story shaking their heads.

But Jesus' parables reveal the truth to the humble. He points them to the landowner in order that they might exult:

O, it is wonderful,
It is marvelous and wonderful,
What Jesus has done for this heart of mine;
The half has never been told!

They hear their Savior loud and clear in this parable, saying, "Salvation is a matter of grace, not of just desserts!" And so they pray, "Lord, let me be a late afternoon worker, with no hope of blessing based on anything I might do for you."

Mr. Tyson is the general secretary for the Committee on Christian Education and the editor of New Horizons. Reprinted from New Horizons, May 1997.