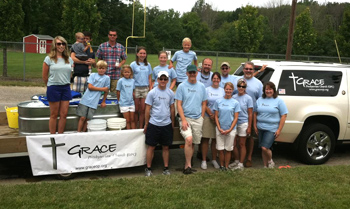 In the spring of 2008, a family who had moved to the Sandusky/Huron, Ohio area began attending Covenant OPC in Mansfield. They asked if a Bible study could be held in Huron. The session agreed, and soon Larry Oldaker, began leading a Bible study with three families in a home.

As God slowly added families to the group, they began meeting in a hotel, and in 2009, they applied to the presbytery to be recognized as a mission work under the oversight of the Covenant OPC session in Mansfield. Worship was held at the convention center of the Kalahari Resort near Sandusky. More families were added.

Larry Oldaker became the Organizing Pastor of Lake OPC, Cleveland. He maintained the preaching and discipleship at Grace Fellowship but was not able to do more. Some families moved away and others left the group due to doctrinal differences, but the core of five families and others that associated with the group continued to persevere with ongoing outreach events.

In 2015, when the group wanted to look for an organizing pastor, the Home Missions Committee wondered if the group was large enough. Members prayed that four families would be added by the end of the year, and the Lord answered their prayers.

By this time, Lake OPC had called Geoffrey Willour to be its pastor, and Larry Oldaker resumed his role as Regional Home Missionary. He continued to work with Grace Fellowship along with several other men. Earlier this year, the Presbytery of Ohio suspended its RHM position, and Larry Oldaker became the organizing pastor at Grace Fellowship. They ask you to pray with them that God will add another four families to the group.

Huron is a small, blue-collar town of fewer than 8,000 people, but nearby Sandusky has a population of more than 25,000. Erie County, where both towns are located is home to more than 75,000. The area is made up of small towns along the "North Coast" of Ohio. Many come to the area to enjoy Lake Erie's shoreline, sport fishing, and its large amusement parks.

While there are a good number of people in the area, Oldaker says that Ohio is not a hotbed of Reformed theology. Arminian and credo-Baptist views are common and only about 25% of people in Erie County regularly attend a church. There are no other NAPARC churches in the county.

Twelve families gather at a banquet facility each Lord's Day morning for worship, and gather again one Sunday evening a month. The group also has a prayer meeting and Bible study on Wednesday evenings. Pray for plans to begin a Sunday school program next month.

On Thursdays, Pastor Oldaker goes to the local doughnut shop and then walks on the pier so that he has a regular opportunity to meet locals. Several members are involved in Canines for Christ bringing dogs to nursing homes as a way to begin conversations with residents. The congregation has also had a presence at local festivals, hosts an outreach women's study and ministry, and held VBS last summer. Pray that God will grant Grace Fellowship opportunities to reach people with the gospel in this area that don't attend church.