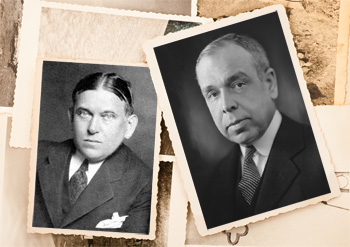 Eighty years ago this month J. Gresham Machen died in Bismark, North Dakota. He had caught a bad case of pneumonia—any kind was bad then before the widespread use of antibiotics in 1940. What took him to those remote parts was speaking on behalf of the new communion, then the Presbyterian Church of America (now the OPC). Only two-and-one-half weeks later, H. L. Mencken, arguably the leading op-ed writer of the 1920s and 1930s, not to mention his fame as a provocateur, literary critic, and magazine editor, wrote an essay for the Baltimore Sun about Machen that functioned as an obituary. That piece, “Dr. Fundamentalis,” was a curious episode in American history. Here was the leading debunker of religion and morality (at least in literature) praising the leading defender of Reformed orthodoxy. What was in it for Mencken? What would Machen have thought of Mencken’s support? We can only speculate on the latter question, but figuring out Mencken’s support for Machen is easier to discern.

The 1937 piece was not the first time that Machen had caught Mencken’s eye. (Though both men grew up in Baltimore and were born only one year apart, they inhabited vastly different social and cultural circles; Mencken hailed from German-American stock and lived on Baltimore’s conventionally middle class west side; the Machens were firmly in the WASP upper middle class and lived in the Mt. Vernon neighborhood which Henry James described as Baltimore’s “parlor.”) In 1931 for his own magazine, The American Mercury, Mencken wrote a short piece, “The Impregnable Rock,” about his fellow Baltimorean (though Machen had not lived in the city since he enrolled at Princeton Seminary). What impressed Mencken about Machen then, aside from Machen’s voting for Al Smith, the Democratic nominee for president in 1928 who also opposed Prohibition, was the Westminster professor’s learning. Unlike popular fundamentalists who engaged in antics and slogans, Machen used reason and scholarship to support his defense of Christianity. As Mencken, who proudly thought of himself as a man of reason, wrote, “If Christianity is really true, as he believes, then the Bible is true, and if the Bible is true, then it is true from cover to cover. . . . [Machen’s] position is completely impregnable. . . . If he is wrong, then the science of logic is a hollow vanity, signifying nothing.” In other words, Machen was a serious person, someone whose ideas and manner deserved respect, even from those who had no inkling of faith. Mencken was a life-long agnostic, but showed remarkable deference to thoughtful Christians who refused to turn their religion into bumper-sticker messages. That same estimate of Machen informed Mencken’s obituary six years later. The remarkable aspect of that estimate of Machen’s life was Mencken’s capturing an insight that has escaped even the most informed historians of American religion and intellectual life, namely, that fundamentalists, not modernists, were the ones with reason on their side. The general view of mainline Protestantism then, repeated in standard historical narratives since, is that liberal theology accommodated the findings of natural science and higher criticism to fashion a Christianity that was acceptable to men and women with a college education. Mencken thought that was nonsense:

It is my belief, as a friendly neutral in all such high and ghostly matters, that the body of doctrine known as Modernism is completely incompatible, not only with anything rationally describable as Christianity, but also with anything deserving to pass as religion in general. Religion, if it is to retain any genuine significance, can never be reduced to a series of sweet attitudes, possible to anyone not actually in jail for felony. It is, on the contrary, a corpus of powerful and profound convictions, many of them not open to logical analysis. Its inherent improbabilities are not sources of weakness to it, but of strength. It is potent in a man in proportion as he is willing to reject all overt evidences, and accept its fundamental postulates, however unprovable they may be by secular means, as massive and incontrovertible facts. . . . [I]t is one thing to reject religion altogether, and quite another thing to try to save it by pumping out of it all its essential substance, leaving it in the equivocal position of a sort of pseudo-science, comparable to graphology, “education,” or osteopathy.

That, it seems to me, is what the Modernists have done, no doubt with the best intentions in the world. They have tried to get rid of all the logical difficulties of religion, and yet preserve a generally pious cast of mind. It is a vain enterprise. What they have left, once they have achieved their imprudent scavenging, is hardly more than a row of hollow platitudes, as empty as [of] psychological force and effect as so many nursery rhymes. They may be good people and they may even be contented and happy, but they are no more religious than Dr. Einstein. Religion is something else again—in Henrik Ibsen’s phrase, something far more deep-down-diving and mudupbringing. Dr. Machen tried to impress that obvious fact upon his fellow adherents of the Geneva Mohammed. He failed—but he was undoubtedly right.

Although Machen and Mencken were coming at the situation from different angles, they shared a perception that cultural Christianity was throttling deep and serious engagement with the profundities of human existence. Machen believed the churches had exchanged the deep truths of the gospel for an optimistic moralism. So too, Mencken believed the literary and academic establishment (largely run by mainline Protestants) had cut off American letters from the dark realities of human nature and the natural world. Both men tried to shake America up. To borrow Mencken’s line about Machen—they failed, but they were undoubtedly right.

D. G. Hart, a ruling elder in the Orthodox Presbyterian Church, is the author of Damning Words: The Life and Religious Times of H. L. Mencken.