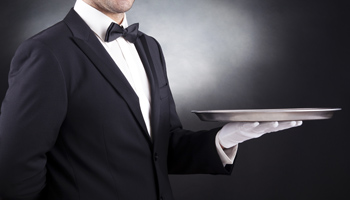 Not To Be Served, but To Serve

Americans have been subject to a great deal of political news and controversy of late, running through a long election season and continuing (as of the day I write) with the inauguration of a new president. The recent feelings of most Americans toward their political leaders and candidates have obviously not been happy ones. Candidates, from whatever party, seem to embody various combinations of deception, manipulation, and bombast. We are grateful for political officials that rise above this and show real integrity and wisdom, but we fear these are exceptions. Our political class, on the whole, appears obsessed with obtaining influence, honor, and power.

Of course, it's easy for Christians to get sucked into the skepticism, resentment, and disgust that permeate the American attitude toward politics. But whenever we find ourselves focused upon other people's failings, we ought to pause for some self-reflection. Seeing the speck in other people's eyes is simple, but recognizing the log in our own is difficult. Mark 10:35-45 provides an important reminder in time of political resentment. We Christians are hardly immune from temptations to crave the very influence, honor, and power that we find contemptible in others. But, Jesus reminded his disciples, this is not how we conduct ourselves as citizens of his kingdom. He pointed them, and us today, to his own character and conduct on the way to the cross. Rather than calling us to influence, honor, and power in the present age, Jesus calls us to suffering and service.

The Call to Suffering

Mark 10:35-45 begins when James and John approach Jesus and ask that he place them at his right and left hands in glory. A bold and ambitious request under any circumstances! But to appreciate its true audacity we need to notice what Jesus has just said to his disciples in the preceding verses: he is going to Jerusalem to be condemned, mocked, spit upon, flogged, and killed (10:33-34). Jesus is on his way to be crucified, and James and John are angling for places of honor and power.

Jesus responds by referring to a cup he has to drink and a baptism with which he must be baptized. On the surface this sounds harmless enough. But Jesus was referring to a cup filled not with a refreshing drink, but with divine wrath (e.g., Ps 75:8). And by baptism, he had in mind not a gentle sprinkling with water but a destructive torrent of judgment, foreshadowed in the great flood of Noah's day and the waves of the Red Sea that crushed the Egyptians (see 1 Cor 10:1-2; 1 Pet 3:20-21). We can appreciate the faith of James and John: they did believe, after all, that Jesus was destined for glory. But Jesus had to suffer first, and he tells them that they too had to share in his sufferings here and now. For James this meant martyrdom (Acts 12:1-2); for John it meant exile on Patmos (Rev 1:9). For you and me? God alone knows. But we do know with certainty that though our minds, with James' and John's, readily crave honor and influence, we are called now to suffer with him if we also wish to be glorified with him (Rom 8:17; 2 Tim 2:12).

The Call to Service

The temptation to seek honor and power was not James' and John's alone. We know this because our text tells us that the other ten disciples heard what they did and were indignant. Why indignant? Clearly because they too wanted those spots at Jesus' left and right and were outraged that their two colleagues tried to jump ahead of them in line. So Jesus extends his instruction to all twelve disciples—and it's powerful instruction for us too.

Jesus first reminds them of their own political leaders, how they lord it over others. If we today feel contempt for our political rulers, we can only imagine how they felt about the Romans, their foreign overlords with a standing army who kept the throne of David vacant. But Jesus' disciples were not to be like them. Rather, whoever wishes to be great among them must be servant of all. To be a citizen of Jesus' kingdom means not only to sufferas he did but also to serve as he did.

Jesus closes with familiar words: "For even the Son of Man came not to be served but to serve, and to give his life as a ransom for many." The power of this statement lies in the fact that, according to the Old Testament, the Son of Man actually was meant to be served (Dan 7:13-14). Yet even he came to serve. And not just to serve but to give his life as a ransom—which implies he came to purchase slaves. The Son of Man, to whom all service is due, made himself the servant of slaves. Surely we—the slaves to sin and death ransomed by Christ—have no business lusting after honor and power. Instead, may we rededicate ourselves to enduring the suffering and pursuing the service to which Christ appointed us in this present age.