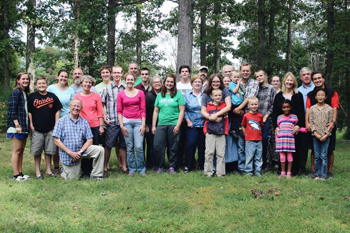 History Camp and other offerings at The Machen Retreat & Conference Center

What was the Protestant Reformation all about, anyway? I mean, can't we all just get along? Live and let live?

This year is the 500th anniversary of the start of the Protestant Reformation, which began after Martin Luther challenged the Roman Catholic Church in many of its teachings, recovering the truth of the Gospel that sinners are saved by the justifying grace of a holy God. Machen Retreat & Conference Center, in beautiful Highland County, Virginia, is holding a History Camp, for young people between the ages of 12-18, to answer the question, "What was the Protestant Reformation all about?", and "how does it effect us today in America?" Professors from Liberty and Regent Universities will lead the camp.

Registration is open now for this camp, and we encourage you to do so as soon as possible. Also, if you’ve ever heard of Dagorhir (a full-contact, live-action combat game, and combatants engage each other in battle with foam-padded boffer weaponry and equipment), you'll enjoy our Stronghold Camp, where there are also devotions and Bible studies. There is also a Latin Camp (you'll learn to speak it!), led by OPC elder Dr. David Noe. Consider signing up for these or other retreats or conferences this year at The Machen Center, in the beauty of God's creation.