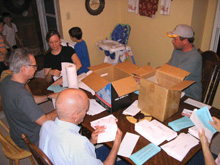 This article is an introduction to the Committee on Home Missions and Church Extension of the OPC. The author, Richard R. Gerber serves as the associate general secretary of the committee. The photograph to the left shows several members of Faith OPC in Garland (Dallas), Texas hard at work in the home of Pastor and Mrs. Chad Bond, preparing an outreach mailer that was sent to 1,200 homes. This is a common scene in mission works around the country, as members are enthusiastic about helping to reach those in their community with the gospel of Jesus Christ.

Home Missions has been a vital part of the Orthodox Presbyterian Church since her inception. The first General Assembly erected the Committee on Home Missions and Church Extension. Before that Assembly completed its business, the Committee met for the first time. Within six months, the first home missionary was on his way to Washington, D.C.

The Committee is composed of nine ministers and six ruling elders, elected to three-year terms by the General Assembly. At the Committee's call, Ross W. Graham has served as general secretary since 1990 and has led the efforts to forge a partnership with the presbyteries. Richard R. Gerber joined the staff as associate general secretary in 1999. Mrs. Vickie Swann serves as administrative assistant.

The sessions, congregations, and presbyteries of the OPC have developed a godly passion for the establishment of new churches. They expect that each year a number of new mission works will be planted. The Committee rejoices over this expectant attitude of the church and how it is bolstered with diligent prayer, labor, and giving!

During 2006, the Lord of the Harvest worked mightily within the presbyteries of the OPC to establish eighteen new mission works—the most in any year in her denominational history! And some interesting trends have developed. One-third of the organizing pastors of OP mission works are over fifty years of age, lending their maturity and experience to help set good patterns for Reformed ministry.

Five of the recently established churches are Hispanic works, bearing evidence of the rising tide of interest in the Reformed faith among those whose first language is Spanish. Three other mission works worship in Portuguese, reflecting a substantial immigration of Brazilians to North America. Through the labors of Presbyterian missionaries in Brazil beginning 150 years ago, Presbyterian churches are a significant presence in that country. Now some of these brothers and sisters are coming to the U.S. and Canada.

Perhaps the most startling statistic of all is that one out of every five churches in the Orthodox Presbyterian Church today is a mission work. As the year 2007 unfolds, twenty mission works are busy finding their organizing pastors and doing the work of establishing a firm foundation on the Lord Jesus Christ who is their head and cornerstone. Five of those fields now have their organizing pastor on board.

The Committee provides a variety of assistance and support to the work of home missions in the presbyteries.

Prayer support is a key element of the support provided for mission works. The Committee through its staff lays before the people of the church the needs, opportunities, fruits, and challenges of each mission work. In this way, the people of the OPC become part of the work God is doing. The bi-weekly Home Missions Today prayer bulletin is a key component of this support. It is available in the Home Missions section of this website.

The Committee's staff provides two pages of information on the mission fields for every issue of New Horizons, the OPC denominational magazine. Home missions prayer needs are also given in the “Prayer Calendar” in each issue of the magazine. Twice yearly a full color brochure called Home Missions Update provides a listing of all current home mission works along with stories and pictures chronicling some of what is happening across North America. Please contact Vickie Swann for a copy at swann.1@opc.org.

Financial assistance may be provided to a new mission work. If the presbytery and/or the mission work is not able to fully support the labors of a full-time evangelist, the presbytery may ask the Committee for financial assistance. This support normally last for no more than four years. After the first year, the support declines on a quarterly basis. Urban works may receive support for up to five years, with no quarterly reduction. Special fields receive a lower monthly level of support, but without the time restrictions.

Regional home missionaries are an integral part of the home missions program of the OPC. God has used their labors to establish many new Orthodox Presbyterian churches. These men serve as the church planting representatives of their presbyteries, and meet with groups interested in establishing new mission works. They provide wisdom and counsel to organizing pastors and supervising sessions. They also assist presbytery home mission committees with their expanding administrative responsibilities in an enlarged OPC in the process of finding, calling, and caring for evangelists who become new church planters.

The Committee is assisted in its work through the annual Regional Church Extension Conference. Presbytery home missions committee chairmen, regional home missionaries, and the Committee staff confer together to coordinate their ministries and finances. This is also a time to think together strategically about the ministry of home missions in the OPC.

In 2003, in consultation with presbytery representatives, the first steps were taken for a more intentional church planting strategy. This was laid alongside the strategy of responding to groups that were approaching the OPC for assistance to develop into Reformed and Presbyterian congregations. Among the fruit from the more intentional strategy are works in Toronto, St. Paul, and Chicago. A work in St. Louis is beginning; one in Washington, D.C. is on the verge of being launched.

The manual, Planting an Orthodox Presbyterian Church, was developed in consultation with the presbytery representatives and the Committee. It has proved useful for better equipping OP church planters for their task. It has also proved useful in working with emerging groups and providing guidance to orient the overseeing sessions of new mission works.

God has been pleased to use the manual to meet a need beyond the OPC. A variety of other Reformed and Presbyterian denominations around the world have been granted permission to use it in their ministries.

Financial support for the ministry of home missions in the Orthodox Presbyterian Church comes mainly through gifts to Worldwide Outreach. Lord willing, of the $1,144,204 budget for 2007, $825,000 will come through Worldwide Outreach gifts. Another $125,000 is expected to come from gifts designated for the ministry of the Committee on Home Missions and Church Extension. $191,204 is expected to be used from the Committee's contingent funds. These contingent funds have come to the Committee through the bequests of God's saints in the OPC. In the past year, over $300,000 was received through bequests. Rejoice at the abundant provision God is making for the ongoing ministry of home missions in the OPC.

May the Lord be pleased to continue to use the prayers, labors, and gifts of the people of the Orthodox Presbyterian Church for the establishment of Bible believing, Presbyterian and Reformed congregations throughout North America.