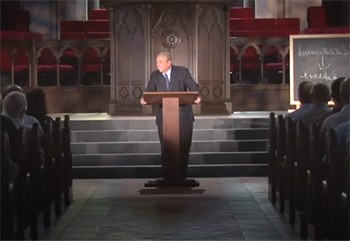 What We Celebrate at Christmas

What we celebrate at Christmas is not so much the birth of a baby, as important as that is, but what’s so significant about the birth of that particular baby is that in this birth we have the incarnation of God Himself. An incarnation means a coming in the flesh. We know how John begins His gospel, “In the beginning was the Word, and the Word was with God, and the Word was God.” So in that very complicated introductory statement, he distinguishes between the Word and God, and then in the next breath identifies the two, “The Word was with God, and the Word was God.” And then at the end of the prologue, he says, “And the Word became flesh and dwelt among us.” Now in this “infleshment,” if you will, of Christ appearing on this planet, it’s not that God suddenly changes through a metamorphosis into a man, so that the divine nature sort of passes out of existence or comes into a new form of fleshiness. No, the incarnation is not so much a subtraction as it is an addition, where the eternal second person of the Trinity takes upon Himself a human nature and joins His divine nature to that human nature for the purpose of redemption.

In the 19th century, liberal scholars propounded a doctrine called the kenotic theory of the incarnation, and you may have heard it, the idea being that when Jesus came to this earth, He laid aside His divine attributes so that the God-man at least touching His deity no longer had the divine attributes of omniscience, omnipotence, and all the rest. But of course, that would totally deny the very nature of God, who is immutable. Even in the incarnation, the divine nature does not lose His divine attributes. He doesn’t communicate them to the human side. He doesn’t deify the human nature, but in the mystery of the union between the divine and the human natures of Jesus, the human nature is truly human. It’s not omniscient. It’s not omnipotent. It’s none of those things. But at the same time, the divine nature remains fully and completely divine. B. B. Warfield, the great scholar at Princeton, in remarking on the kenotic theory of his day said, “The only kenosis that that theory proves is the kenosis of the brains of the theologians who are propagating it.”—that they’ve emptied themselves of their common sense.

But in any case, what is emptied is glory, privilege, exaltation. Jesus in the incarnation makes Himself of no reputation. He allows His own divine exalted standing to be subjected to human hostility and human criticism and denial. “He took the form of a bondservant and coming in the likeness of men.” This is an amazing thing that He doesn’t just come as a man, He comes as a slave. He comes in a station that carries with it no exaltation, no dignity, only indignity. “And being found in appearance as a man, He humbled Himself and became obedient even to the point of death,” the shameful death of the cross.

Teacher, professor, pastor, author, husband, father, grandfather, friend, servant of God and His people—Dr. Robert Charles Sproul, better known to many simply as R.C., was all of these things and more. Having finished his race on earth, Dr. Sproul has gone on to his reward, and we now celebrate his legacy of faithful service to Christ and His church.. The above transcript is from a video by Dr. Sproul posted on the Ligonier Ministries website.