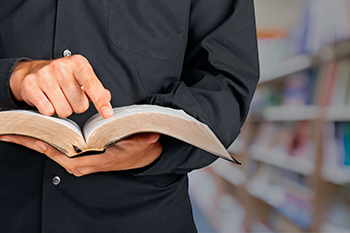 The Reading of Scripture in Worship

There is a historical precedent. In Exodus 24, there is a description of God's word for the first time being written and then read. The historical context is the ratifying of the covenant between Yahweh and his people through the mediation of Moses. Moses "recounted to the people all the words of the Lord and all the ordinances." The people responded, "All the words which the Lord has spoken we will do" (vs. 3). Then "Moses wrote down all the words of the Lord" (vs. 4). What Moses wrote is referred to as "the book of the covenant." After the offerings, and after sprinkling the altar with blood, he "took the book of the covenant and read it in the hearing of the people; and they said, 'All that the Lord has spoken we will do, and we will be obedient!' " (vs. 7).

Notice the order in which the ministry of the Word takes place. Moses first recited all the words that the Lord had revealed to him. He then wrote down the words of the Lord. Finally he read the Lord's word to the people. Simply put, God reveals himself, his revelation is recorded, and then it is read.

But why write down what God has revealed? The Lord had commanded Moses to record the defeat of Amalek for a memorial (Ex. 17:14). On Mount Sinai, the Lord himself wrote on tablets of stone the ten words of instruction he had for his people (Ex. 24:12). Moses heard and recited the words of God, and then he wrote the words in a book. Many other examples could be given. Our Confession gives insight into the reason why the Word of God is written:

It pleased the Lord, at sundry times, and in divers manners, to reveal himself, and to declare that his will unto his church; and afterwards, for the better preserving and propagating of the truth, and for the more sure establishment and comfort of the church against the corruption of the flesh, and the malice of Satan and of the world, to commit the same wholly unto writing: which maketh the Holy Scripture to be most necessary. (1.1)

God reveals himself and then commits the same unto writing, and that writing becomes part of his revelatory activity.

The word of God is written so that it might be read. Moses wrote down all the words of the Lord, and then he took the book and read it in the hearing of the people. Hearing these words read, the people received them as though the Lord was speaking directly to them. Their response to the reading is expressed by their pledge of obedience, "All that the Lord has spoken we will do, and we will be obedient!"

When the Word of God is read in our churches during corporate worship, the Lord himself speaks to us—about his covenant of grace, about his redemptive acts in history, about Jesus Christ. Our worship ought not to be characterized by an intellectualism, merely processing words and ideas, nor characterized by a mysticism divorced from redemptive history. When the Scriptures are read, God speaks to us. We should respond, "All that the Lord has spoken we will do."

Throughout the history of God's people, the Scriptures were read publicly to the assembly of God's people. On one occasion, the Jews who returned to Jerusalem after the Exile gathered together and asked Ezra the scribe "to bring the book of the law of Moses which the Lord had given to Israel" (Neh. 8:1). Ezra "brought the law before the assembly of men, women and all who could listen with understanding," and he read from the law from early morning until midday (vss. 2–3). All the people listened attentively to the law as it was read (vs. 3). A wooden podium had been erected above the people, from which Ezra opened the book in the sight of all the people (vs. 5). When he opened the book, all the people stood up, and Ezra blessed the Lord, to which all the people responded "Amen, Amen," lifting up their hands. Then bowing low, they worshiped the Lord (vs. 6). The law was explained, and further reading was done (vss. 7–8). Verse 18 describes how Ezra read from the book of the law daily throughout the celebration of the Feast of Booths. The description is clearly of corporate worship, and some observations on this text are in order.

First, the people of God asked for the reading of God's Word. The Word is for the church. The church and the Scripture have an intimate bond that comes to expression when the Word is read to an expectant congregation.

Second, the reading of the Word of God was extensive in the corporate worship of God's people. On the first of the month, the Word was read to men, women, and children from early morning until midday. The Levites continued to explain and read the law, and later Ezra read it daily for eight days during the feast.

Third, the reading of the Word of God had a profound impact on the lives of his people. When the Word was read publicly, the people responded not only by standing to show honor to the Lord, but then by bowing low to signify their submission to the Lord. They recognized that they were standing in the presence of God when his words were read. Then Nehemiah, Ezra, and the Levites needed to encourage the people in the joy of the Lord, "For all the people were weeping when they heard the words of the law" (vs. 9).

There is one other passage that is part of the historical precedent for the reading of the Scripture in public worship. In Luke 4:16–21, we read about Jesus reading Scripture:

And He came to Nazareth, where He had been brought up; and as was His custom, He entered the synagogue on the Sabbath, and stood up to read. And the book of the prophet Isaiah was handed to Him. And He opened the book and found the place where it was written, "The Spirit of the Lord is upon Me, because He anointed Me to preach the gospel to the poor...." And He closed the book, gave it back to the attendant and sat down; and the eyes of all in the synagogue were fixed on Him. And He began to say to them, "Today this Scripture has been fulfilled in your hearing."

Note the irony. The incarnate Son of God—the clearest, most gracious and profound revelation of God, the Word made flesh, of whom Moses and the prophets had written—was reading the Scripture in the corporate worship of God's people. Here is the great coalescence of word and deed. Like a seamless cloth of golden thread, God's personal and verbal revelation united in that lowly synagogue in Nazareth.

Since the coming of Christ and the completion of the canon of Scripture, there is no new revelation coming, unless one includes the last great act of Christ's return. But the Word of God remains effectual for us. Herman Bavinck writes that in the Scripture

God daily comes to his people, not from afar but nearby. In it he reveals himself, from day to day, to believers in the fullness of his truth and grace. Through it he works his miracles of compassion and faithfulness. Scripture is the ongoing rapport between heaven and earth, between Christ and his church, between God and his children. It does not just tie us to the past; it binds us to the living Lord in the heavens. It is the living voice of God." (Reformed Dogmatics: Prolegomena, 385)

True worship includes listening to God's voice when the Scripture is read, and then humbly bowing in his presence, committing oneself to covenant fidelity.

There are many reasons why the church should continue to read the Scriptures during corporate worship. There is the historical precedent outlined in this article. Furthermore, in the reading there is a declaration of God's mighty acts (Ps. 96:2–3; 1 Pet. 2:9). Then the Lord commands that his Word be read publicly (Deut. 31:10–13; 1 Tim. 4:13). But tradition, declaration, and command must be understood in the greater biblical context, that in the reading of Scripture we find God's presence and we hear his voice.

The author is pastor of Grace Presbyterian Church in Columbus, Ohio. He quotes the NASB (Updated Edition). Reprinted from New Horizons, June 2009.