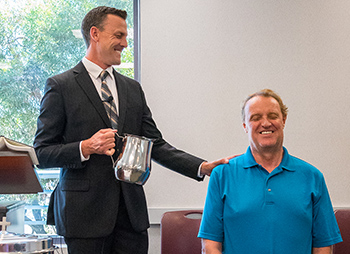 Building a Culture of Evangelism in Anaheim Hills

The church in Anaheim Hills is flourishing with multiple unbelievers attending regularly and new believers getting ready to join. When asked, "What do you attribute this to?" Pastor Chris Hartshorn's response was multi-faceted and full of insights for us.

Evangelism as part of everyday life

To begin, Hartshorn responds: "This comes from people in our congregation being faithful to invite unbelievers to worship and reaching out to people wherever they go- stores, sporting events- you name it." Recently Hartshorn's wife Megan was at a store seeking to buy some patio furniture. A young man named Luis was helping her, and the two struck up a conversation. At one point, Luis gave Megan a business card for his side financial business. She accepted it and then proceeded to hand him a business card for the church. "Well, here's my business card," she said. She would later learn that Luis had never been in a church before. He was 22, from the D.C. area, and had just moved to California to start over. His mom had recently come to faith and said, "It'd be nice if you'd come to church sometime." Luis thought about this and prayed, "God, if you're real, give me a sign." Days later, Megan walked into the store and handed him an invitation to church.

Clearly God had been working behind the scenes. Hartshorn adds, "the situation with the patio furniture was actually taking a long time. There was a lot of waiting around. Megan could have gotten frustrated, but instead she saw an opportunity and took the time to engage Luis. That's the kind of person she is. She is always ready to engage others, whether it be with a friendly smile or a meaningful interaction." Because of Megan's willingness to be used of God, Luis came to church for the first time. And once there, he kept coming. Hartshorn has been meeting with Luis on a regular basis and he is in membership classes right now. Luis even brought a friend who hadn't been to church since she was a little girl. They are going through the Confessing Christ book together, and Hartshorn expects that both Luis and his friend will make public professions of faith and be baptized soon.

Another story is that of Scott, a Mormon raised in Utah who moved in next door to the Hartshorns a few months back. Scott always had a nagging sense that he wasn't good enough, and that he could never do enough good works to be saved. Church each week was a heaping on of condemnation, and Scott got to the place where he said, "if I'm going to go to hell, just let me go there in peace."

"But," Scott shares, "when I moved next door to the Hartshorns, I saw something real being lived out- something that I wanted. I saw what it looks like to be Christ-like, and I saw love. It was what I had been looking for my whole life. And then when they invited me to church, I heard the glorious gospel message, and I came to realize that I don't have to be good enough, because Christ has done it all."

Scott was recently baptized at AHPC, and is zealous in sharing his faith with others and inviting them to church. "My faith was once a burdensome thing, and an unwelcome obligation, but now that I have the true Christ, it is a wonderful privilege and opportunity to worship and to serve and to share." Scott admits that he is far from perfect, but he says, "at least I sleep well at night now."

The stories of church members inviting unbelievers to worship don't stop there. One of the women in the church has invited a friend who comes to worship 3 out of every 4 weeks. Hartshorn shares that the friend "doesn't buy it yet, but he is captivated and intrigued by the message of the Bible and preaching. He used to think he was a Christian, but now he understands that there's more to it than he thought." Another brother of a family in the church has been attending. He's had some rough things in his past, including jail time, but he seems to desire a positive change. Hartshorn shares that he also knows of two unbelievers watching their worship services online. They are fellow dads that he knows from his son's baseball team. One of them has shared with Chris, "I want to believe, I just don't know how to do it."

Sort of like the well-known phrase, "If you aim at nothing you will hit it every time," Hartshorn states, "If you're not aiming for something, you're never going to get anywhere." He emphasizes that a congregation with both believers and unbelievers present does not just happen by accident. "We are actively working toward making that our reality. That is our aim." God is the one who gives the increase, but he also commands us to be planting and watering seeds (1 Cor. 3:6-8).

"We are trying to work into the culture of our church intentional thoughts about how an unbeliever thinks. We're asking ourselves, 'how do we meet unbelievers where they are, and engage them both compassionately and winsomely? When they come to worship, how can we best be patient, loving, and accepting?' We know most of them have no reformed background whatsoever. We won't water down our theology or remove any piece of our reformed confession, so then, how can we better explain liturgy or terminology? How do we engage with unbelievers' false conceptions or assumptions about the church? These are all things we're constantly working on doing better. Fundamentally, we're trying to reach people that aren't like us. And in order to do so, we need to think differently."

Having the (difficult, but honest) conversation

"There is a neat thing we are seeing right now," says Chris. In addition to striving to understand the thinking of unbelievers, the congregation at Anaheim Hills is asking the simple yet pointed question: "are we looking to invite others?" This past Sunday a group of five guys were talking for a half hour after evening worship about this very thing. "The conversation centered around the struggle and fear to evangelize- to cross the 'pain threshold' of personal comfort," Hartshorn states. At one point, one of the guys said, "Sometimes I just don't care about other people at all. I don't care, and that really needs to change." Another guy chimed in and said, "Yeah, sometimes I don't care like I should either." Hartshorn was very encouraged by this conversation, because, "having these conversations is a great place to start... We weren't just talking about the weather or sports. We were sharing our faith struggles and concerns- things that relate to the Spirit. What followed was more discussion on how to evangelize, how to invite others to worship, how to talk about our faith…"

Hartshorn is also leading a Sunday School class on evangelism to further knit this important practice into the hearts and minds of the flock. He tells of some push back he has received for this persistent focus, but the neat way it has gradually been overcome. One instance was with a man who was upset after Sunday School class one day. He went home, re-read the passages they discussed and prayed about it. Eventually he realized that the things shared were true. Particularly, what was discussed that day was the necessity of discipleship and evangelism in the life of a believer.

Perhaps these words will come as a challenge to us as well. With an air of urgency, Hartshorn emphasizes, "Being willing to talk to people about our faith and how it affects our lives is not an optional part of discipleship. It is indispensable. We need to be willing to wrestle with the truth that we are called to share our faith. In our age today, I believe that people see coming to Christ as just another choice we make, like buying a car. Instead, we need to see our relationship with him as the foundational element of all our life and all our choices. And if our Christianity is not just another choice, then in all of our relationships, people ought to see evidence of this. Our faith is the center of who we are and so many of us are hiding it. That is the essence of worldliness. The world says 'don’t share faith or politics', but the Bible doesn't say that. The Bible says, 'always be ready to give an answer...' If Christ is central in our lives, then that should come flowing out in all our interactions."

Saturating all things in prayer

"In all this, prayer needs to remain consistent," says Hartshorn. Going back to the aiming analogy, Hartshorn expresses that at Anaheim Hills, one primary aim is conversions and adult baptisms. To attain to that, they must first of all pray and consistently plead to the Lord toward that direction, and they do. The church prays together every Sunday evening and Hartshorn regularly encourages his people to pray every day for people they know who don't know Christ: "Pray for them until they do know Christ."

Some churches may hear what Anaheim Hills is doing and wonder what God would have them do to work in their church in the same way. "What's most important," says Hartshorn, "is that people pray. Prayer is central. We are all totally inadequate and insufficient in ourselves. We need to lead and saturate all we do in prayer."