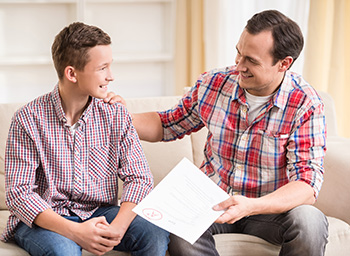 The Purposes of Church Discipline

As Orthodox Presbyterians, we believe in the church. Though the world sees ecclesiastical commitments as passé, we are old-fashion in our appreciation for the body of Christ on earth. As hymnwriter Timothy Dwight phrases it, "For her my tears shall fall, for her my prayers ascend; to her my cares and toils be giv'n, till toils and cares shall end." We love the church because we love Christ.

Does this mean that we affirm every group calling itself a "church?" Are we so gullible as to believe that they are true churches, simply because they label themselves that way? Not at all! We apply the tests formulated during the Protestant Reformation to evaluate all claims to "church-hood."

The three marks of a true church are the true proclamation of the word of God, the right administration of the sacraments, and the faithful exercise of church discipline. When these marks are present, we can have confidence that such a body is indeed a church.

The general acceptance of the first two marks – preaching and the sacraments – is not always extended to the third mark – discipline. Indeed, many churches have altogether abandoned church discipline, and some don't even practice any form of church membership at all. Without some recognized church membership, discipline becomes nearly impossible.

Living in this milieu, the exercise of ecclesiastical discipline seems odd, harsh, ungracious and mean-spirited to many believers. They suppose it constitutes revenge against those who dare to disagree with their spiritual authorities. Church discipline verges on sanctified abuse in the eyes of modern folk. "Medieval" and "draconian" would be the labels they apply to our practices.

So why should we persist in such admittedly unpopular principles? And what are we hoping to accomplish? What are the purposes of church discipline?

The main reason we continue to believe that faithfully administered church discipline is important is because the Bible tells us so. In His word, God has called the church to maintain discipline. To abandon discipline because of cultural disapproval is to allow men to become the lords of our collective conscience. But we know that God alone is the true Lord of our conscience. If His word commands anything, we are satisfied to obey Him in that matter, however unpopular such obedience may be among men.

But there are also important purposes motivating our careful use of these measures. First and foremost, we desire to vindicate the honor of Jesus Christ. If sin is allowed to continue unchecked within the church, the honor of Christ suffers. Critics and skeptics will point out the hypocrisy of a church that preaches one thing and practices another. They smugly justify their rejection of Christ in this way.

Paul speaks to this in Romans 2:23-24 when he says, "You who boast in the law dishonor God by breaking the law. For, as it is written, 'The name of God is blasphemed among the Gentiles because of you.'" We protect the honor and vindicate the name of Christ by applying discipline to offenders within the church. King Jesus takes such behavior very seriously. He won't approve of those who break His commands.

A second purpose is to promote the purity of the church. When evil breaks out in the church, it spreads throughout the body unless it is purged. Indeed, Paul indicates that wickedness can spread like gangrene through the church, and potentially be fatal to the body. This theme runs throughout the Bible, most especially in the book of Deuteronomy. Repeatedly in that book we find the refrain, "Thus you shall purge the evil from among you." If the evil is not purged, the church becomes polluted.

Still another purpose of church discipline is to prevent copy-cat sins. Church discipline has a deterrent effect. As members watch the disciplinary process play out, it show what will happen if they act in similar ways. When they face temptation, they remember what happened in a discipline case and will ask themselves, "Do I want that to happen to me?"

A fourth purpose is the vindication of relatively innocent parties. We do not believe that everybody is equally guilty in every situation. Although no one is absolutely innocent, some people can be relatively innocent in particular situations. When such people are sinned against by a fellow believer, we must not treat the guilty and the innocent alike. Offenders must be held accountable for their offenses, but those offended against must be protected and defended. It is simply not just to treat the victim and the offender as equally guilty. Worse by far is a situation where a victim is treated like an offender, while the true offender is exonerated.

In Luke 15, Jesus tells the parable of the lost coin. In this story a woman loses one of her silver coins. She lights a lamp, sweeps the floor and searches until she finds her lost coin. Having found what was lost, she calls her neighbors over to celebrate. Jesus ends that parable with these words: "Just so, I tell you, there is joy before the angels of God over one sinner who repents."

When the church faithfully exercises church discipline, and the Spirit grants repentance to a sinner, and that sinner is received back, the angels of God rejoice over the one sinner who repents!