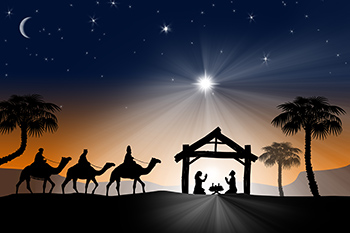 Song of the Nativity

The Rev. Dr. Geerhardus Vos taught at Princeton Theological Seminary from 1893 to 1932.

He was friends with and influenced many of the founders of the Orthodox Presbyterian Church,
including J. Gresham Machen, Cornelius Van Til, Ned B. Stonehouse, John J. DeWaard and John Murray.

A lifelong poet, Vos wrote poems for his friends as Christmas gifts.
Song of the Nativity was his Christmas present to students and friends in 1924.

Ye pilgrims, in the tale retold
What do your wondering eyes behold?

A babe which, scarcely given, gives,
Its every breath a grace that lives;

God turned to his own sacrament,
Spending his all, yet never spent;

Entering our kind and ours alone,
Flesh of our flesh, bone of our bone;

The uncreated Light of Light,
Heaven’s noonday, swallowed by our night;

Guileless, incapable of wrong,
More than the lambs he lay among;

His smallness laden with our sin;
Born that his birth-cries might begin

Full thirty years of tragedy,
Each step a step towards Calvary.

And this is the high-holy spot,
Angels are sad to visit not!

Here undergird God's cords of gold
Our earth, and it from falling hold

Into the desperate abyss,
Where love not even a memory is.

This is the blest alighting-ground
Of grace, whence it shall circle round

With one wide-flung redeeming span
All sin and sorrow and pain of man,

And make new paradise streams flow,
That from God's throne through Eden go;

Yea cause all things now mute and dim
Again to shine and sing in Him.

If this ye in the manger see,
A promise and a potency

Of what was for the future willed,
Observe a thing even now fulfilled,

Well worth to open wide your eyes;
Close to the babe, transfigured, lies

She through whom God the Christ-gift gave
The world both and herself to save.

Lest thou the full-orbed glory miss,
Note well the mother's part in this.

Of just awakened motherhood,
Trembling at its beatitude;

They tried to limn a mystery
Of God-encompassed ecstasy.

But God, who first the image drew,
Knows more than ever artist knew.

His work is the Madonna-face
With its uncopyable grace,

Where, as in a pellucid stream,
To Him his own eyes mirrored seem.

The light God saw in Mary shine,
The inmost shrine within her shrine,

The whitest flame within the flame,
Religion is its holy name.

From it proceeded the ground-swell,
Upheaved in her high canticle;

The feeling of unworthiness,
Not loath, but eager to confess

Itself but chosen instrument,
A chord through which God's music went,

Like pulses throbbing through the frame
Each to the heart-pulse whence they came;

A hymn unaging, ever new,
An organ-peal the ages through,

Chanting: "The handmaid of the Lord;
Me be according to thy word";

Made through a fine simplicity
Mindless of its own melody,

Anxious alone that God should hear
A virgin strain pleasing his ear,

Sensing as from within God's mind,
Why He exalts the humble kind,

Puts down the mighty from their seats,
The hungry with his fulness meets;

And, rising high above the thought
Of aught could in return be brought,

Perceives how all the blessed live
Only that God may give and give.

So Mary, with naught else to bring,
Made her sweet Psalm an offering,

Wherein the Lord such pleasure found,
He let it through the world resound,

To bless our ears each Christmas night
With notes like drops of liquid light,

So clear, we mean to hear in them
The very voice of Bethlehem,

As had by Mary's side we sat,
And drunk of her "Magnificat."