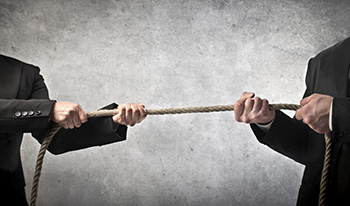 When ought Christian people to withdraw from a church with which they have been connected and seek to lead other people to withdraw with them? That is certainly a timely question just now. A good many people are earnestly considering it in the Presbyterian Church in the U.S.A. The question of separation has ceased to lie in the dim and indefinite future and must be settled in a very few weeks. The General Assembly meets at the end of next month. At the General Assembly the church’s decision on the great issue of the day will probably be made.

If the Permanent Judicial Commission declares the mandate of the 1934 and 1935 Assemblies to be constitutional or on any of the other grounds alleged confirms the condemnation of anyone of the members of The Independent Board for Presbyterian Foreign Missions or of the Rev. Arthur F. Perkins or of the Rev. John J. DeWaard, and if the General Assembly, sitting as a court, confirms this decision, then the Presbyterian Church in the U.S.A. will have dethroned Jesus Christ and placed the word of men above the Word of God.

That is true no matter what is thought of the particular persons involved. If they were the most insignificant or the most unworthy persons in the whole church, the principle would remain exactly the same.

What shall be done by other Christian people in the Presbyterian Church in the U.S.A. after their brethren have thus been ejected? Shall they remain in that church or shall they depart?

Is Every Separation Schismatic?

That question is a very serious question indeed. It ought not to be lightly answered.

Unquestionably there are times when separation from a church organization with which one has been connected is a sin. That sin is called the sin of schism. It is a very heinous sin. In saying that, I agree with those who denounce the Covenant Union, and who denounce the pledge, looking to separation in the event that efforts of reform fail, which the “covenant” of the Covenant Union contains.

But if I agree with the opponents of the Covenant Union in holding that there is such a sin as the sin of schism, I think they in turn ought to agree with me when I maintain, on the other hand, that by no means every separation from an existing church organization is the sin of schism.

Can it be seriously held by anyone that every separation is sinful schism?

Well, that could be held by a Roman Catholic, but I do not for the life of me see how it can be held by any Protestant. All Protestants have made themselves party to a separation from an existing church organization. Are we going to abandon the Protestant principle and go back to the Roman Catholic position? That is just exactly what we do if we hold, as many persons seem to hold today, that “splitting the church” is necessarily sinful.

If we are not going to take that step, if we are not going to abandon Protestantism and unite ourselves with the Roman Catholic Church, then we must inevitably admit that there are times when separation from an existing church organization is not the sin of schism but an inescapable and very solemn Christian duty.

The Example of the Reformation

Here, then, is the principle of the thing—it is schism to leave a church if that church is true to the Bible, but it is not schism if that church is not true to the Bible. In the latter case, far from its being schism to separate from the church in question, it is schism to remain in it, since to remain in it means to disobey the Word of God and to separate oneself from the true Church of Jesus Christ.

What Is Our Present Duty?

It is the latter case which will prevail in the Presbyterian Church in the U.S.A. if the Permanent Judicial Commission takes the action which it is expected to take. If that action is taken by the Permanent Judicial Commission at the end of next month and is then confirmed by the General Assembly sitting as a court, some earnest people, at very great sacrifice of worldly goods and with bleeding hearts, will leave church buildings hallowed for them by many precious memories and will sever their connection with a great church organization.

Why will they take that step? I will tell you. They will take that step because they are convinced that if they did not take it, if they did not depart from the existing church organization, they would be guilty of the sin of schism. By their continuance in a plainly apostate church, they would be separating themselves from the true Church of Jesus Christ and would be unfaithful to Christ the Head.