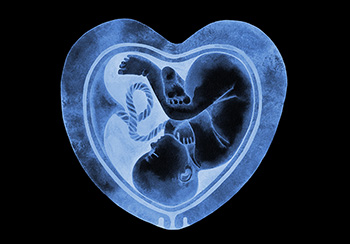 How Does God's Word Regard the Human Fetus?

We are using the term “abortion” here to indicate the expulsion, through human instrumentality, from the womb of the mother, of a living human fetus with the intended result that the fetus may cease to exist.

The reason for our concern as Christians is in the very fact that it is a human fetus whose life is terminated. Inevitably and appropriately, Christians approach this subject from the divine viewpoint concerning human life expressed in the Sixth Commandment: “You shall not kill” (Exodus 20:13).

The rationale for this prohibition against the willful taking of human life is in the words, “for in the image of God made he man” (Genesis 9:6). This same passage does not prohibit, but rather allows man to kill other living things in order that man himself might live. But man, made in God’s image, may not be killed. Again, this passage does not rule out capital punishment, but expressly demands that “who so sheds man’s blood, by man shall his blood be shed.”

The question before us is whether the fetus is a man, a human person in God’s image; and therefore, whether such abortion violates this very basic command of God.

As Christians under the authority of God’s Word, we turn to it and inquire what direct or indirect evidence it may supply bearing upon abortion, and particularly, upon how the Scriptures regard the fetus.

Our inquiry is inevitably faced with the following queries: What does the Scripture say about the fetus? Does it regard it as human or not? Does the Scripture indicate when human life begins, i.e., when man begins to be a person in the image of God?

This passage is often cited among the first bearing upon our question. It speaks of hurting a woman with child so that her fruit departs. Then follows a phrase in both negative and positive form: “Yet no harm follow” and “if any harm follow.” With this latter reference comes the law of equal punishment: “then you shall give life for life …”

The exegetical question is whether or not the fetus itself is included in the words “if any harm follow.” If it is included, as I think it is, then it is obvious that this passage provides evidence that the death of a fetus is regarded as the death of a human being, and that it is punishable “life for life.” This correlation would underscore that the fetus is regarded as human, Of course, this is not premeditated abortion. One may only conclude that if accidental “abortion” is so construed, how much more would intentional abortion be subject to the penalty of death.

For the argument’s sake, consider the opposite position that the fetus is not included in the law of equal punishment. Would this be evidence that the Old Testament considered the fetus less than human and abortion as not a violation of the sanctity of human life? It could be and has been so argued; but this does not necessarily follow. Such an interpretation would only indicate that the man causing the harm was not held responsible for what was an indirect and unintended death. Elsewhere the Old Testament adopts this position toward the unintentional manslayer without implying that intentional taking of human life is not culpable. The same may be said of this passage and of the question of intentional abortion.

This is an outstanding example of those passages that refer to a person in his fetal state. Among other significant phrases is verse 13: “You did cover me in my mother’s womb.” The significance of this statement is in the fact that the psalmist refers to himself in his personal human identity while in his mother’s womb—“you did cover me.” He refers to himself before and after birth in his psychosomatic unity. The “I” who will now give thanks to God (verse 14) is the “I” who was wonderfully made in the secret of his mother’s womb (verses 13–15).

Here this identification of the humanness of the fetus is clarified, and at the same time any inclination to say this is merely poetic license is removed. “Behold, I was brought forth in iniquity, and in sin did my mother conceive me.” The affirmation David makes is that he was one marked and characterized by sin from the time of conception in his mother’s womb. To speak of one’s identity from the moment of conception, and to do so in terms of one’s sinfulness, is to affirm one’s humanity from the moment of conception. The same person who speaks of himself as the human “I” who at birth was in iniquity (verse 5a) is the one who speaks of himself (“me”) who was conceived in sin by his mother (verse 5b).

The iniquity and sin are not the sex act of conception or the act of birth, but are rather the sinfulness inherent to the psalmist and to every man from the moment of his existence as man. David describes that moment of existence as the time when his mother conceived him.

“Now the word of the Lord came unto me, saying, Before I formed you in the belly I knew you, and before you came forth out of the womb I sanctified you …” This passage begins with an affirmation of the Lord’s knowledge of Jeremiah even before God formed him in the womb. What is particularly germane to our consideration is that Jeremiah is spoken of as formed in the belly and sanctified before he came forth out of the womb.

These expressions of knowing, forming and sanctifying indicate that Jeremiah is regarded, by God himself, as a human being while in the womb. The fact that God knew or chose him even before his existence began in the womb is no negation of the fact that what was formed in the womb was a human person, recognized and considered by God as such.

One of the most relevant New Testament passages is this one. Verse 41 says that Elisabeth’s baby leaped in her womb when she heard the salutation of Mary. “The babe leaped in my womb for joy” (verse 44). Here we have a six-month fetus described in terms, of the human emotion of joy. This same fetus is designated a son in verse 36.

The fact of our Lord’s complete humanity is also most significant to our study. Even the uniqueness of the incarnation of God’s Son as the God-man serves by that very uniqueness, coupled with his identity with our human nature, to aid our research at this point.

The angel declared to Mary that she would conceive and bear a son to be called Jesus (Luke 1:31). Mary naturally asked, “How shall this be, seeing I know not a man?” (verse 34). In answer, the angel said unto her, “The Holy Spirit shall come upon you, and the power of the Most High shall overshadow you: wherefore also the holy thing which is begotten shall be called the Son of God” (verse 35, ASV).

To encourage Mary to believe this word of promise, the angel continued: “And behold, Elisabeth your kinswoman, she also has conceived a son in her old age; and this is the sixth month with her that was called barren. For no word from God shall be void of power” (verses 36, 37, ASV).

The American Standard Version takes the Greek word gennao to mean conceive, and translates it “is begotten.” Though the word may mean beget, conceive, or bear, it is my evaluation that beget or conceive is the meaning in this context. The word appears in the angel’s answer to Mary’s question about how she can conceive, not how she can give birth. Elisabeth’s own conception is given as an encouragement (verse 36). The context is certainly oriented to the idea of conception. The first part of verse 35, with its reference to the Holy Spirit’s activity, also has the perspective of conception in view. And finally, the parallel in Matthew 1:20, using the same verb gennao, which obviously means and is translated by conceive or be begotten, would seem to indicate that the same meaning is intended in Luke 1:35: “that which is conceived in her is of the Holy Spirit” (cf. Matthew 1:18).

How is Mary, who knows not a man, to conceive such a child? Why and how is that son a holy thing, namely God’s Son? Luke says the inference is self-evident, Because the Holy Spirit shall come upon Mary and the power of the Most High shall overshadow her,therefore (Greek, dio) the incarnation takes place (verse 35).

If Jesus’ humanity, his becoming incarnate in human form as God’s Son, is accomplished by the conception in Mary of the Holy Spirit; and if this is true of him who became like us in all things, sin excepted; does this not provide another indication that our humanity likewise begins at our conception? The Christian Church of all ages has always confessed in the Apostles’ Creed that Jesus Christ, God’s only Son, “was conceived by the Holy Spirit.”

It may be objected that this evidence is scattered and indirect, and not an explicit prohibition. But this in itself is not a substantial objection. Much of the biblical evidence bearing upon many important questions is similarly presented. This is of the nature of the biblical revelation. Lack of explicitness cannot be pressed to indicate acceptance of or indifference to abortion.

Often the sparsity of reference to a question in the Bible only indicates a strongly presumed and underlying commitment to and even an argument on the question at issue. (Consider the virtual omission of reference to the Lord’s Supper in the Epistles. Except for the problems that arose at Corinth there would be none.) Lack of explicit reference to abortion may just as well indicate that Scripture understands it to be covered by the general prohibition of murder.

Opposition to abortion has characterized the Christian church throughout its history up to the present time. This may be seen in statements from the early church, continuations of that position in present-day Roman Catholicism and in a report drawn up in the Lutheran Church—Missouri Synod, and in the impact Christianity has had on the laws of so-called Christian nations until quite recently. (The United Nations charter has a quite strong condemnation of abortion.) State laws in the United States by and large prohibited abortion, except to save the life of the mother, until the recent surge of attempts to. “liberalize” these laws.

Modern ecclesiastical and ministerial proponents of abortion are affirming the spirit of the age, denying the historic Christian position. Their pronouncements fit in with the current agitation for the mother’s “rights” while ignoring the rights of the fetus.

Some of the statements from the early church are given here, as demonstrations of Christianity’s understanding of abortion:

Dr. Knight was chosen as moderator of the Thirty-eighth General Assembly of the Orthodox Presbyterian Church. He is a professor in practical theology at Covenant Theological Seminary in St. Louis.