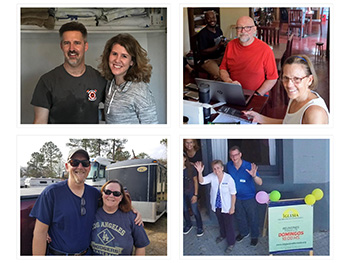 Mark 6:7 ...he called the twelve and began to send them out two by two. Luke 10:1 ...the Lord appointed seventy-two others and sent them on ahead of him, two by two.

In addition to joining larger established short-term mission teams and trips, a trend on the rise in the OPC is married couples or pairs of friends setting out "two by two" in response to the need for volunteers on a foreign or domestic short-term mission or disaster response field.

Photos of couples who have served in 2019:

Married couples have also coordinated hurricane relief efforts in Houston; rebuilt the kitchen at the Keys OPC facility in Key West; rebuilt the master bath at the Neon OPC manse in Neon, Kentucky; and served as House Parents for the summer at the Boardwalk Chapel in Wildwood, New Jersey.

A father and son team helped lead the English for Teens Bible Camping trip in Quebec; a father and daughter team served alongside the husband and wife teams rebuilding the kitchen at Keys OPC.

Two-man teams have traveled to Uganda to make missionary home upgrades and repairs; a two-man team from Wisconsin travels to Haiti on a regular basis to perform a variety of maintenance projects.

Visit www.opcstm.org to learn more about Short-Term Missions in the OPC!