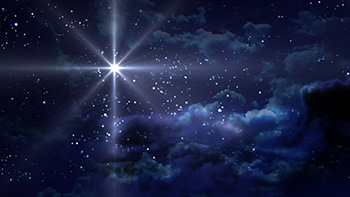 A Polar midnight had settled upon a far northern Eskimo village. The land of the midnight sun had become submerged in its perennial blackout as the pall of darkness and gloom blanketed everything. Life and activity had all but ceased around the snow covered, wind-swept, bear-skin tents and ice igloos. Within, amid smoking whale-oil lamps, the Eskimos eagerly awaited the dawn of a new year. The chief of the village, according to custom, had now appointed one of the young men to ascend each noon to the top of a nearby ice-encrusted hill to search for the first appearance of the sun. After many days had passed there came the long anticipated cry, “The Sun, the Sun, Behold the Sun!” Immediately all the village would appear in its best polar finery and cry in chorus, “Behold the Sun!”

A Martian darkness has settled upon the civilized world today. With war precipitated by Japan upon the United States, peace and security have been blacked out from most of the earth’s surface. But even as the war clouds envelop us, there appears once more upon the horizon a star—a star which outshines all other stars and pierces all gloom and despair—a star which presages the One, and only One, who can bring peace. Once more we hear the good news, “Behold I bring you good tidings of great joy, for unto you is born this day in the city of David a Savior, which is Christ the Lord.” Here we have the glorious proclamation of a fact—a fact which, like no other event in human history, fills a darkened world with joy and causes it to adorn itself in its best festive garb.

Like the star which appeared to the wise men, so this glorious proclamation of the angel irresistibly draws us to the Babe of Bethlehem and, like that heavenly five-pointed star, it announces five significant facts concerning the advent of Jesus Christ.

The first point of this Christmas star is very personal in nature. “For unto you is born this day … a Savior.”

When the birth of the Prince of Wales was announced, throughout the length and breadth of the British Empire there was much rejoicing. Here was the long looked-for heir to the British throne; so on land and sea salutes were fired, flags unfurled, and bells rung, declaring the joyful news.

In yonder hamlet of Bethlehem lies an heir to the throne of earth and heaven. Upon His brow shall rest the crown of the universe. That infant hand shall hold the scepter before which all empires shall fall until He shall “have dominion from sea to sea and from the river to the ends of the earth.” Yet no royal salute echoes through the narrow streets. No flags are unfurled and no bells are rung. But a celestial salute did greet Him. The angels of heaven, appearing in all the Shekinah glory and splendor of heaven, did proclaim His birth: “Behold, I bring you good tidings of great joy, which shall be to all people. For unto you is born this day in the city of David a Savior, which is Christ the Lord.”

To whom was this great announcement made? Not to Herod in the nearby magnificent palace and fortress; not to the High Priest and Pharisees in the stately temple at Jerusalem; not even exclusively to the shepherds as such; but “to all people.” This first announcement of the birth of the Babe of Bethlehem was made to the shepherds only so that they might re-echo it to all the world. Nor was this announcement made only for the people then living, for the use of the future tense, “shall be,” indicates that what had just occurred was for the benefit of all future generations. And now notice how personal is the announcement. The angel might have said, “I bring you good tidings of great joy, which shall be to all people, for there is born this day … a Savior.” But No! The messenger from heaven says, “I bring you good tidings … for unto you is born this day … a Savior.” The advent of Jesus Christ is not only of universal interest; it is of personal, individual interest.

This personal, individual significance of the coming of Christ should take on special interest and meaning when so much of the world has been plunged into war. Often we have misconstrued the meaning of the angelic hymn, “On earth peace, good will toward men,” as referring to national peace. As is generally known, the more accurate Revised Version rendering, “Peace among men in whom he is well pleased,” puts the emphasis where it should be. Christ came, first of all, to make peace, “to make peace through the blood of his cross,” between sinful humanity and a holy God. He came in the second place, to give peace. “Peace I leave with you, my peace I give unto you.” In the third place, He will yet establish peace. Social and national peace can only come after the individual is at peace with God and his fellow man. Isaiah says, “Of the increase of his government and of peace there shall be no end, upon the throne of David, and upon his kingdom to establish it, and to uphold it with justice and with righteousness from henceforth even forever.”

The second point of this Christmas star is the simple but profound statement, “Is born.” “For unto you is born this day … a Savior.” There is nothing remarkable or unusual in the statement itself, but when we realize who it was that was born and how He was born, we may truly marvel. This was the incarnate deity who “was made flesh and dwelt among us (and we beheld his glory, the glory as of the only begotten of the Father) full of grace and truth.” He became flesh by means of the miracle of the virgin birth. Paul was ever aware of His incarnation as we see in his introduction to his epistle to the Romans, “Concerning his Son Jesus Christ our Lord, which was made of the seed of David according to the flesh; and declared to be the Son of God with power, according to the spirit of holiness, by the resurrection from the dead.”

As to all that passed in the seclusion of that stable the Gospel narrative is silent. This only is told: that there the virgin-mother “brought forth her first born son and, wrapped him in swaddling clothes and laid him in a manger.” Beyond the announcement of the bare fact, Holy Scripture, with indescribable appropriateness and delicacy, draws a veil over that most sacred mystery. “He took upon himself the form of a servant, and was made in the likeness of man.”

In a wonderful way, Charles Wesley has caught in these immortal words the true significance of what transpired: “Christ, by highest heaven adored; Christ, the everlasting Lord! Late in time behold Him come, offspring of the Virgin’s womb: veiled in flesh the God-man see; Hail th’Incarnate Deity, Pleased as man with men to dwell, Jesus our Immanuel.”

The third point of this great Christmas announcement stresses the immediacy of His advent—“this day.” “Unto you is born this day … a Savior.” Galatians 4:4 tells us, “When the fullness of the time was come, God sent forth his Son, made of a woman, made under the law, to redeem them that were under the law, that we might receive the adoption of sons.” What does Paul mean by “the fullness of the time”? Why, that towards which all the Old Testament prophecy had looked, how Jesus Christ would come through the descendants of Abraham, be born of the tribe of Judah, appear in the household of David, and be born of a virgin in the city of Bethlehem.

Christ stands at the crossroads of all human history. All that ever went before Him looked forward to that first advent and all who follow have looked back upon it as a harbinger of a new era. His advent changed the datum of the world’s chronology. His coming profoundly influenced the subsequent course of history. His birth has left its immortal imprint upon art, literature and religion. Why such tremendous influence exerted by this Babe of Bethlehem? Because He was “God manifested in the flesh.” “The hopes and fears of all the years are met in Thee tonight.”

The fourth point of the star of Bethlehem definitely states the place of His advent—“in the city of David.” The city of David, of course, was none other than Bethlehem, the ancestral home of David. The angelic proclamation and the fact of Christ’s birth immediately place a seal of fulfillment upon that remarkable prophecy found in Micah and made nearly seven hundred years before: “But thou, Bethlehem Ephratah, though thou be little among the thousands of Judah, yet out of thee shall he come forth unto me that is to be ruler of Israel; whose goings forth have been from of old, from everlasting.”

The city of David only had a stable with which to welcome that advent. But when we think of the Babe of Bethlehem as the Messiah from heaven, the surroundings of outward poverty, so far from detracting, seem most congruous to His divine character. Earthly splendor would here seem like tawdry tinsel, while the utmost simplicity appears like that clothing of the lilies which surpassed all the glory of Solomon’s court.

How wonderful it is that, in the divine sovereignty of God, the census, ordered by Caesar Augustus, brought Joseph and Mary on that eighty-mile journey from Nazareth in Galilee to Bethlehem in Judea at just the time Mary was to give birth to her first child. A further remarkable thing about this census is the fact that it was not taken in the usual Roman way, by which each would have been registered in the town where he was born, but rather it was taken in the Jewish manner, by which each was enrolled according to tribe and family. Both Joseph and Mary were of the house of David, and so had to go to Bethlehem.

The last and most glorious point on this Christmas star is the final declaration—“a Savior, which is Christ the Lord.” These words were carefully chosen and divinely inspired to give us a specific and clear picture of just who this little Babe might be.

Finally, we reach the great climax in the concluding title, “Lord,” the One who has absolute authority and dominion. The One who is worthy of all homage and worship.

The glorious Christmas star has appeared once more and draws us to the Babe of Bethlehem. Each of its five points radiate in different directions and emphasize various aspects of Christ’s birth:

(1) The first point is personal in character and focuses attention upon man, “Unto you,” the object of God’s mercy and recipient of His love-gift. (2) The second point turns our thoughts to the wonders of the incarnation and virgin birth. (3) The third point concerns the time, “this day,” that upon which all the Old Testament prophecies were focused. (4) The fourth point directs our attention to the place, “the city of David.” (5) The fifth point dazzles us with its brilliance, “A Savior, which is Christ the Lord.”

The darkness of tyranny and enslavement, dread and fear, shrouded the world on the first Christmas morn, but the star of Bethlehem had brought new hope and joy. No wonder the shepherds immediately resolved, “Let us now go even unto Bethlehem and see this thing which is come to pass, which the Lord hath made known unto us.” Today once more there hovers over the world the threat of tyranny, when that most glorious heritage Of Christianity, freedom—freedom of thought, of action, of religion is being challenged. But the star of Bethlehem still shines, and shines even more brilliantly than ever before. Its message brings new hope and assurance. “Let us go even unto Bethlehem.”