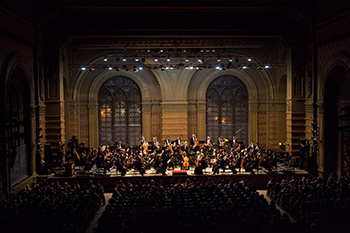 Music to Your Ears

COVID-19 sheltering-in-place or general social isolationism affords us many reading and listening opportunities. I hope to address some of the former, as colleagues are doing just now in their book recommendations here; for now, however, let us indulge some of the latter: the occasion that our current situation provides to sample, on YouTube, and from our own collections, some marvelous music. If you'd like to go beyond the many COVID-19 parodies, some of which are quite amusing (Sound of Music take-offs, "Bohemian Rhapsody" knockoffs, etc.), then I've a few things for your consideration.

Many people don't know where to start. A few years ago, I offered in New Horizons a brief introduction to opera and orchestral music. If you're just starting out, that might be a good place to begin. Leonard Bernstein was not only one of our greatest late 20th century conductors, but one of the best music educators ever. He would often speak in his classic series of Young People's Concerts (1958-1972, with the New York Philharmonic), available and still highly recommended, of the Three B's: Bach, Beethoven, and Brahms. That is the sort of place one should start. Perhaps the six Brandenburg Concertos of Bach, the thirty-two piano sonatas of Beethoven, or the German Requiem of Brahms. Yes, the nine symphonies of Beethoven and the four of Brahms are seminal as are the forty-two of Mozart and the 104 of Haydn. But then don't miss Haydn's string quartets or Mozart's operas (The Magic Flute is a good beginning one; the Marriage of Figaro and Don Giovanni never cease to amaze).

Let's go now to some things not discussed above. If you wish to get into big music (chamber music is another piece; so is opera), consider the following:

The Symphonies of Gustav Mahler: the Third is his longest and presents, as he notes, "a world" in sound. As a trombonist, I especially appreciate the great first movement trombone solo; there's also a posthorn solo that is remarkable and a beautiful mezzo-soprano soloist and children's chorus. The last movement gives us an adagio of great profundity that serves, Bruno Walter noted, as a heartfelt and exalted culmination of this sonic cosmos. The Eighth, "Symphony of a Thousand," is a truly monumental (some would say overblown) work, with an orchestra of 120 or more and oftentimes 500 or more choristers. It's ending is one of those grand endings for which Mahler is renown. And I've not mentioned the First ("Titan"), Fourth (with its calmer demeanor and heavenly vision), Fifth (terribly exciting, from the opening trumpet solo to the heart-rending fourth movement "Adagietto," played at Bobby Kennedy's funeral), Sixth (Tragic), meandering Seventh, and haunting Ninth.

I've left out one, you might think, if you're counting along. Yes, I have: Mahler's Second, known as the "Resurrection" Symphony. This piece stands in a class of its own, in my estimation. It's big like the Third and has a grand ending like the Eighth, but outshines them all, again, so say I. From the loudest orchestral chords in the literature in the first movement to the softest choral entrance in the symphonic repertoire in the last movement, this is a symphony of extremes. It gives new meaning to "from the sublime to the ridiculous," with carnival-like melodies and an ending that is, arguably, the greatest in the symphonic literature (yes there are many great that now come to mind, but this is the most sublime and moving to me). Mahler "converted" from Judaism to Christianity, say some, solely to become the Director of the Vienna State Opera, since no Jewish conductor had ever held, or would be considered, for such a post. But in several of his works, Christianity figures prominently, though not quite of an orthodox variety. Still, his "Resurrection" symphony is, to this boy's heart and ears, a never-failing source of that sorrow mingled with joy that so characterizes the great work of our Savior.

And if you like Mahler, you might like Anton Bruckner. Begin with his Fourth Symphony, the "Romantic." Perhaps you'll then pick up his first three, or go right on to his last five. Symphonies 7-9 are particularly gems, with the last being unfinished in that its three movements (which is what a concerto typically is) instead of the, at least, four movements that typically mark a symphony. There is a different sort of satisfaction in listening to Bruckner, vis-à-vis Mahler, perhaps captured by one commentator who said that Mahler was looking for God and the Bruckner, who was a devout and traditional Roman Catholic, had found him. At any rate, neither Mahler nor Bruckner could have written as they did, both stretching toward the twelve-tone system, had it not been for the one who took German music past Beethoven in the way that he did: Richard Wagner. Next time, perhaps, we can talk about Wagner and others.

One more, though, for now, who bridges nineteenth and twentieth centuries, whom the readers of this would surely appreciate: Jean Sibelius. We all know his "Finlandia," through the tune to the great hymn "Be Still, My Soul." Audition his symphonies. He had seven and I particularly commend two, five, and seven. His Fifth Symphony has one of the most interesting endings. And his Second contains some of the most lyrical and moving music that you'll ever hear. I could talk about Schubert (try his Ninth, the "Great C Major") or Berlioz (and his "Symphonie Fantastique"), never mind several favorites not even mentioned (Dvorak, Tchaikovsky, Shostakovich). Another time! Just don't let all this good time musically be spent doing nothing. Listen to sacred music. Listen to serious music. And enjoy!